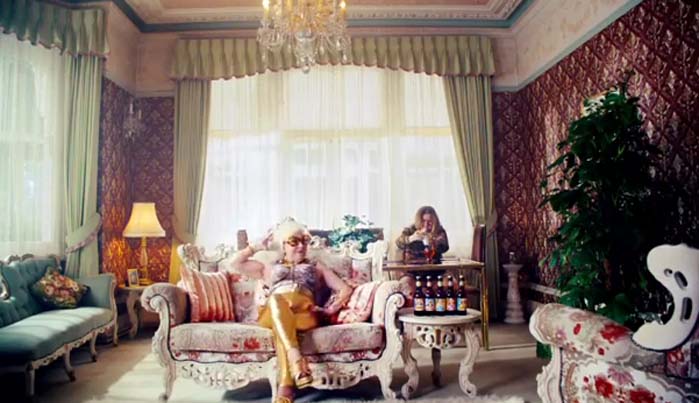 that it is the agency responsible for Ethel’s Brew – a new beer that was recently introduced at the Cannes Lions International Festival of Creativity.

Featuring the tagline “Go Out With a Bang,” the effort was created to raise awareness of DDB’s successful social creativity approach through the case-in-point development of an exceptionally creative brand with only a two-week marketing window and minimal budget.

While the beer was positioned and marketed as the product of an eccentric elderly woman in Brooklyn, the brand and Ethel character were in fact the brainchild of Amir Kassaei, DDB Worldwide’s Chief Creative Officer, and his creative team. The beer was contract brewed by Brasserie Duyck in Jenlain, France, and 15,000 units were distributed last week at several hotels, bars and parties throughout the Cannes Lions International Festival of Creativity. Buzz on websites and in social media throughout the week established the brand’s image with thousands of mentions in blogs, articles and social media about the “Ethel” character and the brew.

“This year in Cannes, instead of just throwing a huge expensive party, we wanted to create something that would be far-reaching, reflective of DDB’s creative nature, and showcase the use of social creativity to produce tangible results for a brand in a short two-week time frame,” Kassaei said. “Anyone can throw an over-the-top party, but pulling off a brand and product launch on a shoestring budget is a more exciting challenge for our teams.”

“We wanted to do something unexpected,” said Chuck Brymer, CEO of DDB Worldwide. “Like take an 88-year-old woman and have her create demand by engaging with consumers with unpredictable and funny messages on Twitter and Facebook. Or have her make a low-budget home video introducing Ethel’s Brew in her outdated, 70’s decor living room.”

To support the launch of Ethel’s Brew, DDB’s largely digital marketing campaign was released over 14 days ahead of the Cannes Lions International Festival of Creativity. The effort included disseminating sharable video and image content via seeding and social media while simultaneously engaging fans and encouraging follows through Ethel’s persona on Facebook, Twitter, Tumblr and more.

The “Go Out With a Bang” campaign features seven video spots portraying the eccentric and fun personality of Ethel’s Brew namesake Ethel Goldschmidt. Additionally, nine out-of-home (OOH) print executions were prominently placed in OOH units and as wild postings across town throughout the Cannes Lions Festival. Ethel’s videos and images appeared on highly trafficked websites such as Funny or Die and Blend.nl, in addition to niche beer blogs such as ratebeer.com and brewbound.com.

Leave a Reply to nothing to see here Cancel reply