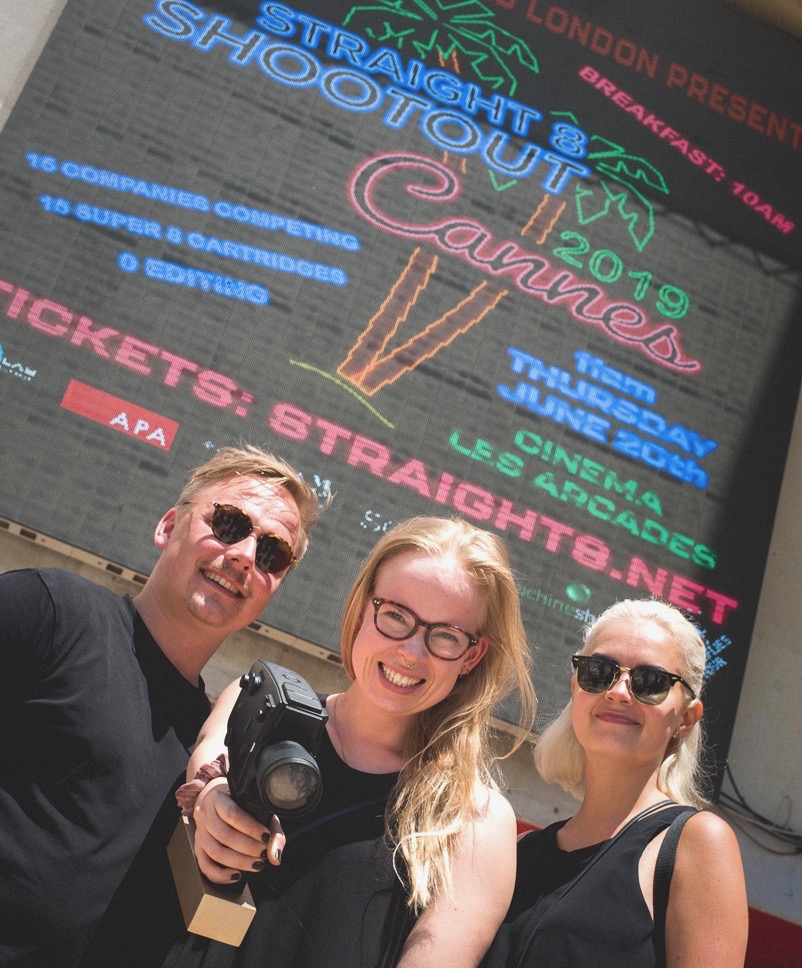 straight 8 shootout premiered in Cannes on Thursday June 20th at Cinema les Arcades, presented by the ​APA​ and ​Cinelab London​. straight 8 shootout is a company-to-company showdown to produce the best 2.5 minute film on Super 8 without editing or post-production, seeing it for the first time at its premiere.

15 companies from 4 continents took up the challenge and voted in the cinema in Cannes for their favourite films – without voting for their own. Last year’s Gold winner Taiyo Kikaku from Tokyo, represented Japan again in the showdown.

The winners of straight 8 shootout Cannes 2019 are:

The audience award​, presented to the company whose film got the loudest audience reaction (aside the winners above) went to: ​Partizan​, London, UK​ for “Kate” film.

The films now remain under wraps because they’ll be screened again, for the second time ever, in London. 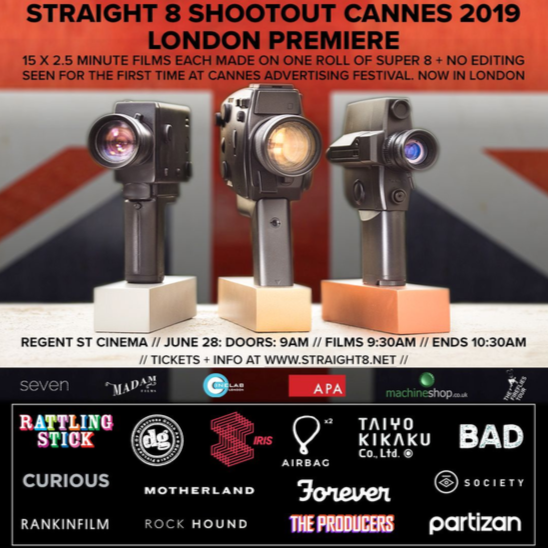 straight 8’s rules dictate that every shot is taken in story order on a single cartridge of super 8 film, with no opportunity for retakes or editing. Any visual effects, colouring and titling must be done the old-fashioned way: as part of the shoot, with the camera. Entrants send their exposed film cartridges to straight 8’s partner ​Cinelab London​ to process and scan.

Super 8 doesn’t record sound. Soundtracks are made by entrants without actually seeing their film, and must be original. straight 8 lines up each soundtrack with the first frame of each film and the first time that ​anyone​ sees even their own work is at the premiere where ALL of the films – good, bad or ugly – are screened.

Director’s Guild’s film opened the show with a cinematic crane shot on a suburban Helsinki street, setting a very high bar for the screening and going on to win.

Producer for Director’s Guild, Juha-Matti Nieminen said of their win and experience: “​We entered straight 8 shootout with our minds open without actually even knowing exactly what we were up to. But after a second look at the rules it sounded like a perfect challenge compared to our daily job on commercials. And it definitely was worth it. It turned out to be great fun on the shoot and super stressful on screening it for the first time at the premiere in Cannes. But it was worth all that. It was pure pleasure to see all these great films around the globe, and we still can’t believe that we took the gold award home. Thank you so much for all our contestants for a good run and great thanks for straight 8 for this absolutely great event. I think everyone who considers their self as a filmmaker should try it this pure at least once in their life. We’ll be back next year for sure.”

A welcome breakfast for ticket-holders in Cannes was hosted by ​Madam Films​, a long time supporter and first time sponsor of straight 8 shootout.

Says Grant Hunter, executive creative director Europe, Iris Worldwide (London): “straight 8 is both exhilarating and terrifying in equal measure…there’s no post trickery to save you. It’s just you, and your idea, exposed for the very first time on a very big screen in the company of some of the industry’s finest.”

Says a spokesperson from London production company Rattling Stick​: “We can’t believe straight 8 has been going for 20 years and this is the first time we’re doing it! For us it’s a great opportunity to let our emerging talent have a go at being resourceful and inventive… a leap into the unknown. Regardless of the end result, we’re happy to watch the process unfold!”

“It’s like giving us guardrails but then letting us go completely buck wild inside them. It’s good to flex those muscles.” says a spokesperson from LA production company Society​”

“Increasingly clients are getting fearful of pushing the limits so here’s a chance to get a bit cheeky.” – Rock Hound​ (production company, London).

Says Steve Davies, chief executive, APA: “We are delighted to be part of presenting Straight 8 in Cannes again this year. It’s the most exciting- because the film makers see their films for the first time at the Cannes screening- and creative- make a three minute film with no editing- event of the week.”

“We process hundreds of films each year, from 70mm down to super 8, with recent films including Mission Impossible and Wonder Woman 1984, and yet still one of the most exciting projects we are involved with is straight 8. The sheer creativity that entrants manage to pack into each reel of super 8 film is amazing, and that’s why we support it”, says Adrian Bull, managing director, Cinelab London.

“It’s a fucking stupid way to make a film, but I love it”, says Jimmy Lam, President, Adfest