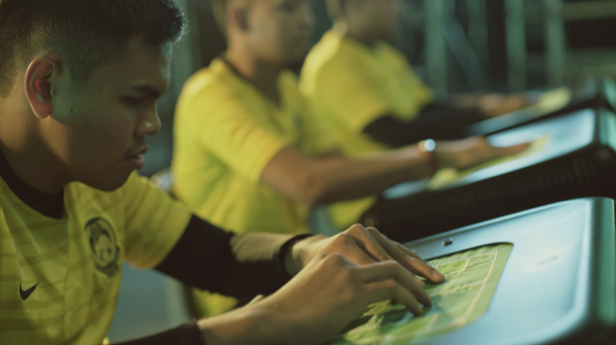 Meet Sunny, Head Coach of the National Blind Football Team. An inspiring man, he proudly leads an amazing bunch of footballers who, in spite of not having sight, are playing the beautiful game and playing it better than many of us.

This new campaign out of Naga DDB Tribal for Digi Malaysia introduces Footbraille where blind football players can “watch” football.

Film Director Barney Chua of Mojo films asks them, “If there is one game you would like to watch, what would it be?”

“The 1980 Olympic qualifying game, where Malaysia beat Korea 2-1!.” They know the game by heart. Now it’s time to see it. And that’s where Footbraille comes in.

“We’ve always been dreaming of ideas for brands that go beyond marketing, and have an impact on society. We don’t always succeed, but we try”, said Alvin Teoh, ECD of Naga DDB Tribal.

“Whether in the form of a film, a project, through technology, or a mash up of everything, the aim is harness the power of ideas and creativity to create something that people will care about. And to think that this idea happened over a random conversation at a mamak stalls is just so surreal,” he adds.

“Soon, everyone on this project will get to witness that special moment when three members of the National Blind Football team experience that 1980 game like never before.”

Coach Sunny leads them to their seats. They get a feel of the device set before them. Then as Coach Sunny narrates the game to the video that is played, the three footballers feel the ‘ball’ moving across the ‘field’ beneath their fingers. That’s how Footbraille works. The movement of the ball is pre-tracked and fed to a tablet that controls the ‘ball’ in real time on the little patch of green beneath their hands. This way, the blind get to experience a recorded football match, and soon, even a live one.

Sunny said, “We had the honour of witnessing the above experience firsthand, sitting quietly at the side and watching them express frustration at a foul, and laughing and cheering at a goal. It was pretty moving.”

“This project would not come to be without the collaborative spirit and dedication of many people. From Barney of Mojo Films who helped birth the idea with us over food (it can’t get more Malaysian than that), to Ang of Expedio Designs, a key player in all things tech, and of course to the peeps at Digi, whose involvement, support and advice guided the project to where it is today,” said Bernard Lee, Digi’s Head of Marketing Services.

“In Digi, we constantly look for new ways that technology can help connect people to what truly matters to them and help build meaningful connections. And with this breakthrough technology, all Malaysians should have equal opportunity to benefit from the power of internet and technology,” said Lee.

“So, the first phase of Footbraille has passed and we have witnessed the impact of the beautiful game on both the visually impaired as well as those who still possess the gift of sight. From this we realise that there is great potential here.”

“Football is a great unifier,” said Barney Chua, Film Director of Mojo Films. “Those who had experienced the euphoria back then are keen to share that feeling and experience with other football fans, even those who weren’t born back then, and those who don’t have the ability to a game live. Thanks to the technology that we have today, we managed to make that wish come true. And by doing so, prove that football and tech can come together to make a nation stronger”, he adds.

“Did we just make history? We would like to think so. This is only the beginning. The next phase would involve a live match. Here, and perhaps far beyond our borders. One can dream right? If a mamak-food inspired idea can get to this spot, it can go far.”