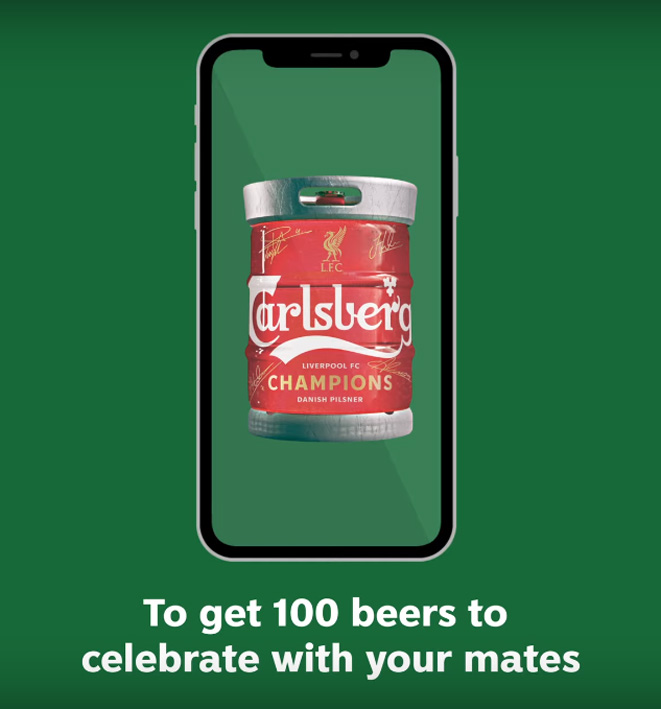 This weekend saw fans across Malaysia celebrate Liverpool’s historic Premier League title. To mark this victory, Carlsberg Malaysia and Grey Malaysia have created the ‘Champions Keg’ a virtual keg holding 100 beers that are redeemable via any smartphone.

The innovative new way of purchasing beer and a digital first for Carlsberg Malaysia, gave fans a chance to raise their glasses towards Liverpool FC. A virtual ‘Champions Keg’ can be purchased for RM500, that comes with two limited-edition Liverpool FC Carlsberg glasses and 100 Carlsberg beers that can be redeemed and shared at participating bars, restaurants and bistros nationwide. To redeem, customers simply have to select the number of beers (a maximum to 10 per session) and show a dedicated QR code to the outlet, to collect beers to share with friends and fellow supporters of the Reds.

Carlsberg have been consistent sponsors of Liverpool FC since 1992, the longest running sponsorship in the history of the Premier League. Despite having been champions of England 18 times, this year marks their first championship title in the Premier League era.

Stefano Clini, Managing Director of Carlsberg Malaysia, said: “Since the inception of the Premier League in 1992, Carlsberg has stood with Liverpool FC from the very beginning with the longest partnership in league history – currently 28 consecutive seasons! To reward the loyalty of Carlsberg and Liverpool FC fans as well as our trade customers who have supported our winning drive and Probably the Best Beer in World that ‘Just Keeps Getting Better’, the introduction of this exclusive virtual Red Keg commemorates our partnership with Liverpool FC so fans can share and celebrate responsibly together with supporters throughout Malaysia in anticipation of that momentous trophy lifting next month.”

Developed alongside Grey Malaysia, the ‘Champions Keg’ is the latest evolution of ‘Adopt a Keg’ an earlier initiative by Carlsberg Malaysia that rewards consumers with free draught beer at participating outlets, helping F&B businesses to come back stronger as the social distancing restrictions are lifted. All details are on a dedicated webpage.

Grey Malaysia ECD Graham Drew said: “The Carlsberg and Liverpool partnership is part of the fabric of the Premier League. With ‘Adopt a Keg’ we found a way to help Malaysia’s bars come back stronger, with the ‘Champions Keg’ we’ve evolved the idea and found a unique way for Malaysian fans to celebrate this iconic moment in Liverpool FC history with all of their mates. Importantly, this historic moment has opened up an entirely new digital means for fans to enjoy and share a Carlsberg.”

The virtual Red Keg is available to the first 100 fans only who are registered users of Adopt a Keg and the Red Champions Kit can be redeemed at up to 10 glasses a time from participating outlets until 31st December 2020 and virtual keg balances can also be shared digitally with other users on Adopt a Keg.

Carlsberg Malaysia encourages consumers to celebrate responsibly by not drinking and driving and practicing social distancing when enjoying their virtual Red Keg and Adopt a Keg redemptions, which are only open to non-Muslims above the age of 21 years.

VIEW THE ADOPT A KEG FILM 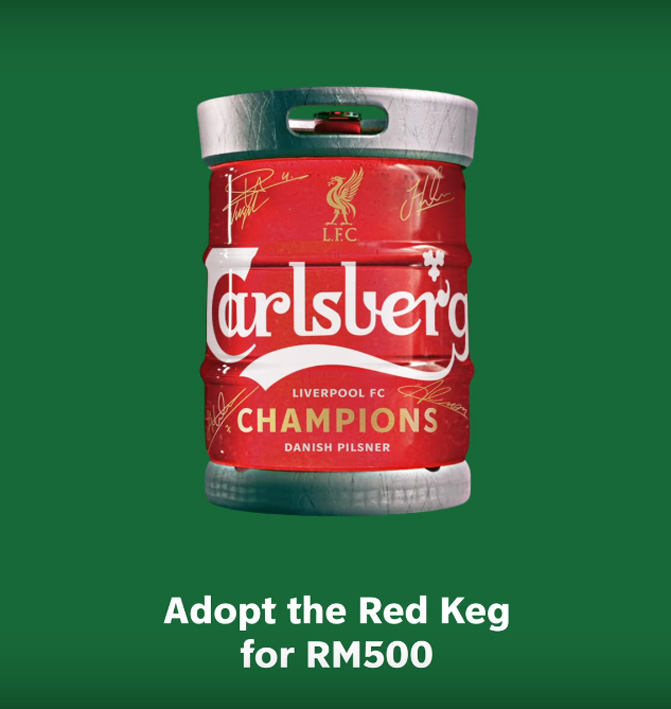