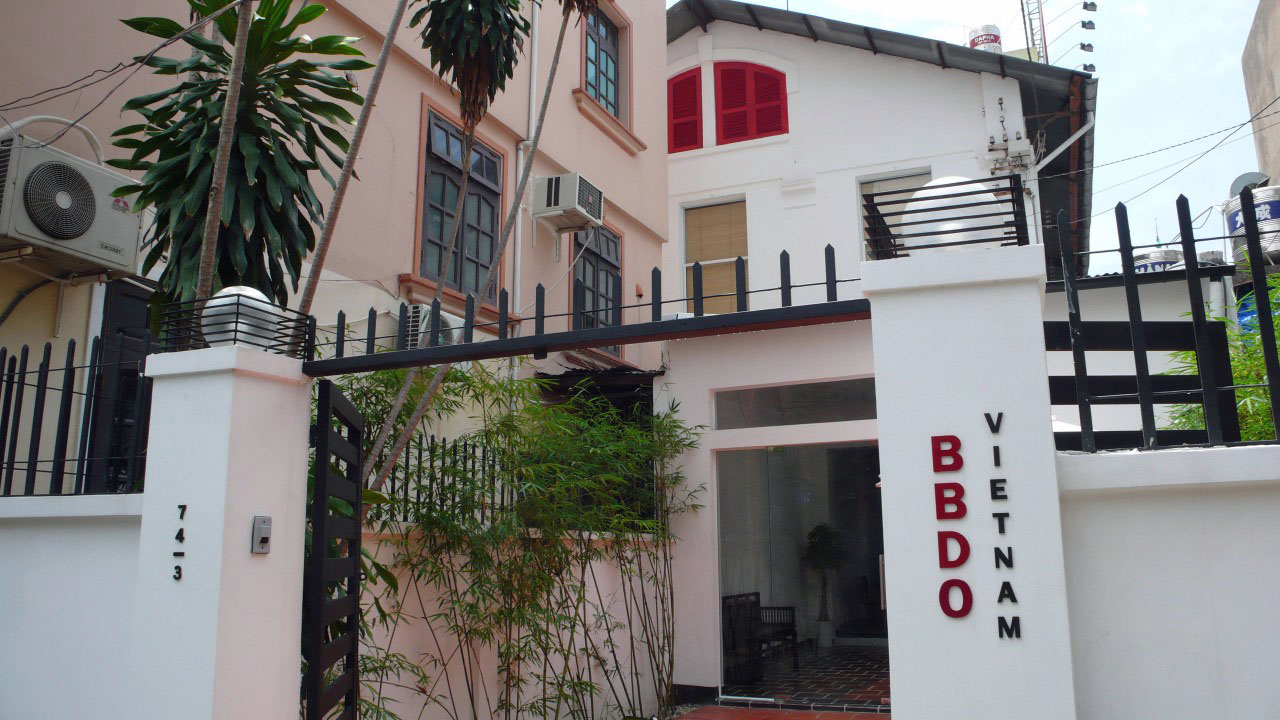 BBDO has closed it’s Vietnam office, effective today. The move to shut up shop comes with little comment of publicity from the network and follows their closure of BBDO in Malaysia in May this year. Here, BBDO Vietnam’s former Chairman and ECD David Smail fondly reflects on the thirteen year history of the agency he founded and worked at for nearly a decade.

As the office I founded in 2007 closes its doors for good today, I guess the best way to address the end is to start from the beginning.

Because there was a whole lot of those fortuitous moments early-on in our story. An unsolicited phone call from an airport lounge. A spontaneous coffee in a metro Manilla hotel lobby. More than one covert rendezvous in a discrete Danish bar, that as luck would have it, shared a common wall with the dilapidated villa that would eventually become the first home of our shared venture.

Exactly thirteen years ago today as I begin to write this, we gathered in our courtyard with our new colleagues from offices around the region. An amazing group of people who for many of us, remain lifelong friends. That evening was the official launch of BBDO Vietnam. A night like no other. Fire dancers. Opium pipes. Plus the guitar strumming and vocal accompaniment of our Thai and Filipino comrades respectively.

Our Vietnamese name, Bay Bong Dau Oc, a reverse-engineered version of BBDO, meant ‘floating minds’. An apt description for our people’s, and possibly my own mindset, with our heads in the clouds. It was conceived by a copywriter I had worked with before. And her compensation for the moniker was, if I recall, a single pen. At that point, we still had a start-up mentality and little money in the bank. In addition to the idea-conjuring connotations, the Vietnamese name also means something like a ‘peaceful high’. So it’s apropos that our first office would be located right off of Hai Ba Trung, through an ancient yellow gate, in Saigon’s most hip hip happening area at the time – The Refinery courtyard. Which dating back to the 1800s was reportedly Indochina’s largest opium refinery. I’m not one that normally buys into the notion that the use of mind-altering substances helps in the commerce of creativity. But there may very well have been some of that intoxicating dust still floating around, because we were off to a great start.

We grew, and like all ventures, had our baby-steps-stumbling-moments. But with the support of a ‘How can I help?’ regional management, adventurous clients, and our small family of hand-raisers, I’d reckon we had the best group of advertising folks in the country at the time. And I’d be happy to debate that with anyone who may think different.

Yes, serendipity. And perhaps other spirits at work too. It’s believed, and with evidence to corroborate, that our over 100-year-old residence was home to more than just our employees that would show-up to work during the day. A teenaged boy, and an elderly couple were thought to have also inhabited the place in their own disembodied benevolent ways. We all had our stories – footsteps on the spiral wooden staircase that never materialized into an actual being and so on. We treated them well with offerings and good thoughts. And they watched over us protectively. Though it was always more than a little spooky to venture into our storage area under the stairs. Maybe because of the cockroaches too.

We did good work. And had great times. Our BBQs in the courtyard would always attract a few walk-ins off the street. A bemused look of embarrassment overtook that of hunger on their faces as they came to the realization that we were an ad agency celebrating a good month, rather than a restaurant open for business. Though we did feed a few of them. Themed holiday parties that offered touches of carnage. That poor Quasar Khanh original table. Our 5-year anniversary was celebrated in a way that only 5-year-olds could enjoy. Face painting, balloons, and a decorate your own cupcake station. The party’s theme: ‘The creative adult is the child who survived.’

Company trips to the country’s mountains or beaches. Or if it was a good year, to a neighboring land. The joy of seeing colleagues out of their natural habitat, and learning a whole lot more about them as those we count ourselves lucky to be on a mutual journey with.

The years went by. We grew out of our villa. Moving into a ‘professional building’. That on one very frightening afternoon, caught ablaze. Everyone got out safe, though understandably shaken. And that’s one call to a client that won’t be forgotten. ‘We’re going to have to postpone the meeting because our office is currently on fire. Reschedule to tomorrow?’ And like the troopers they always are, our crew showed-up the next morning, cleared the ash off of their desks, and got to work. As an aside, the cause of the fire was the building’s stock of toilet paper stored too close to an exposed light bulb. That particular brand of bathroom tissue’s name ‘May’, which in English means ‘lucky’.

People came and went. Though very rarely off to other agencies. Usually to other callings or countries. Most often with a festive farewell and a tear or several. Because whoever happened to cross our door became family. It seemed we attracted a special sort. The Ten BBDO People Values were a good barometer, but they weren’t necessarily learned in that setting. No, our people already had them, and we just provided an environment for them to come out and shine. 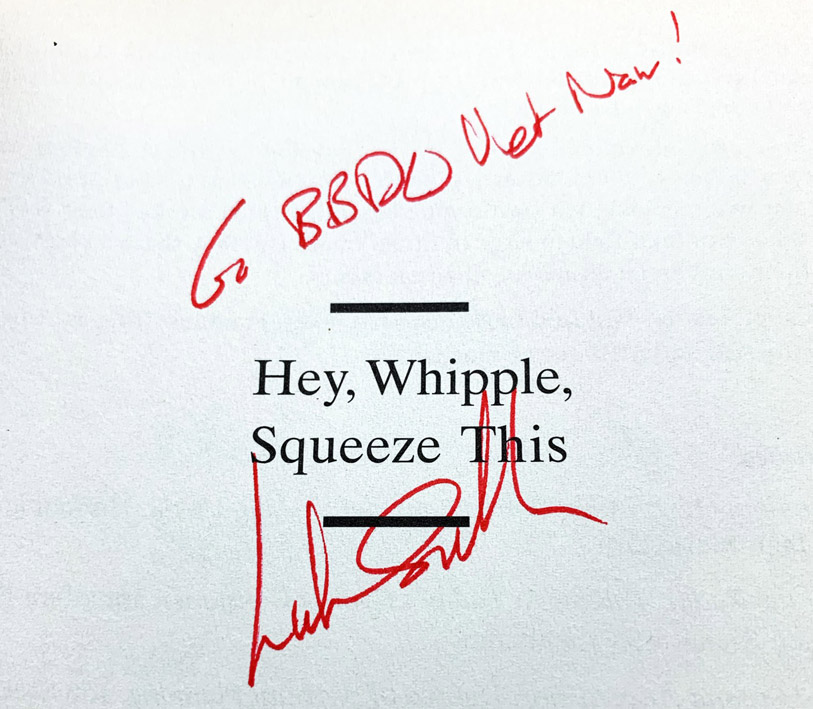 We enjoyed our traditions. Everyone who worked with us got the same welcome gift. An autographed copy of ‘Hey Whipple, Squeeze This’ by Luke Sullivan (pictured). Thanks, Professor. It may not be everything you need to know about advertising today. But it’s a good start. And I appreciated that even though we had a mix of nationalities and native tongues in the office. We were all speaking the same language when it came to making ads. We had our Final Fridays for the whole office to get together and talk about the month prior. And the holiday cards were always a nice way to look back at the year and recount our people’s accomplishments – both professional and personal.

Success was celebrated in different ways. We garnered a few pieces of shiny metal. And won more pitches than we lost. Though most of our work came in by word of mouth. Much respect to our clients on that one. We shared the joy of weddings and births together. I’ve lost count of how many BBDO babies were born. But enough to field a football side. With alternates.

So here’s the tough realization. Life is cyclical. A series of highs and lows. And I can say we shared an asymmetrical amount of highs. We started with a lot of serendipity. Good fortune. Happy accidents, if you will. And I’m a believer in the saying, ‘The harder you work, the luckier you get.’ And we worked plenty hard.

But… sometimes hard work isn’t enough. At a certain point, some challenges become a little more difficult to overcome. And the question as to whether to keep going full steam into them, or just take a bow, and leave the stage, is a heavy one.

In our ominous thirteenth year, perhaps that luck ran out. Those serendipitous moments became fewer. And as we all know, the world changed.

So with that, and even though I left several years ago, I’d like to share my appreciation for what everyone involved help us to create. Say my ‘goodbyes’. Close the proverbial doors. And blow out the candles one more time. (That’s a reference to the old office, and a spooky and lamp-less last night on October 31st.)

There are far too many clients, colleagues, partners and friends (many that tick all of those boxes simultaneously) that had a helpful hand in what we accomplished. And to them, my gratitude is immense and sincere.

So to wherever our happy horde of floating minds may drift off to, please know that you will always be a part of our family.

And I’ll end this in the same way that one of my best bosses ever could. A ‘thank you’ and a handshake (though hugs are accepted too) at the end of the day. And the knowledge that we were all incredibly lucky, whether it was days or years, to share some time, magnificent work, and unforgettable memories together.

David Smail is currently living in the United States and is working freelance in Colorado.

Leave a Reply to Thank you Cancel reply