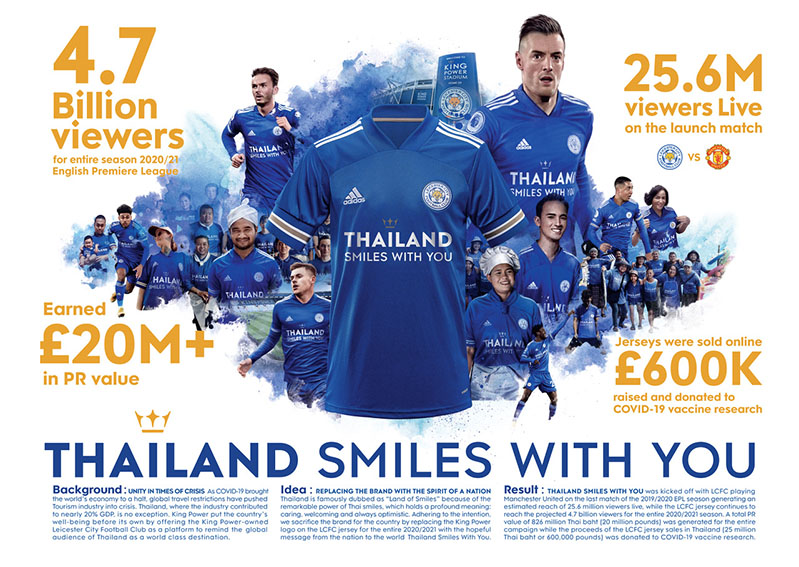 As Covid-19 brought the world’s economy to a halt, King Power teamed up with creative agency Storyteller Bangkok to show their support of Thailand tourism, as global lockdowns and travel restrictions forced Thailand’s and global tourism into crisis.

In Thailand where tourism contributed to nearly 20% of its GDP, was aware of unfavourable effects of this pandemic: no tourists, no hope. King Power realised that for a country heavily reliant on tourism, it would take a united effort to navigate and overcome substantial obstacles that plagued people and businesses involved in the tourism industry.

King Power put the country’s well-being before its own through offering the King Power-owned Leicester City Football Club, 2015/2016 English Premier League champions, as a platform to reach the global audience of Thailand as the world’s destination painted with the smiles of Thai people. Even though global travel is still sharply restricted, Thailand sees itself in the hearts of global travellers when the world reopens for tourism.

Thailand is famously dubbed as “Land of Smiles” because of the remarkable power of Thai smiles. This simple yet meaningful gesture holds a profound meaning: caring, welcoming and always optimistic. It reflects hope, positivity and willpower under uncertain circumstances. King Power wishes to send the world the power of Thai smiles when the world needs it most. Adhering to the intention, we sacrifice the brand for the country by replacing the King Power logo on the LCFC jersey with the hopeful message from the nation: “Thailand Smiles With You” to the world. For the entire 2020/2021 football season, LCFC will be wearing the “Thailand Smiles With You Jerseys”, cheering up a potential reach of 4.7 billion viewers in 212 countries with a unique message the way Thailand knows how, to bring smiles back on people’s faces again.

Whilst the campaign reached global audiences, Storyteller Bangkok needed support from the Thai people to show Thailand’s readiness to welcome back tourists when the world allows the revitalization of the industry. King Power would not be able to achieve the goal single-handedly, it therefore enlisted the help of the nation’s most prominent and notable influencer: The Prime Minister of Thailand. This campaign received the attention and admiration of the Thai government, who accentuated massive PR value for it while also incorporating the assistance of other sectors. The Tourism Authority of Thailand (TAT) adopted “Thailand Smiles With You” to help promote local tourism through the use of Thailand Smiles With You jerseys in all 77 provinces across Thailand. Furthermore, Buriram United FC, Thailand’s highly successful football team, also replaced their Jersey sponsorship with “Thailand Smiles With You,” helping establish this campaign as a national agenda.

A national press conference kicked off by the Prime Minister announcing the collaboration between King Power, LCFC and the Thai Government, marked the launch of the historic “Thailand Smiles With You Jersey,” which earned national and international PR value. Simultaneously, the “Miss Your Smiles” short film featuring Leicester City footballer Jamie Vardy was broadcast internationally.

Three days later in the last match of the 2019/2020 season against Manchester United, LCFC players walked onto the pitch wearing the new “Thailand Smiles With You” LCFC jerseys for global football fans to see  – a moment of pride for Thailand witnessed on a world stage, generating buzz and talkability on social and media publications. While the campaign was run nationwide through multiple media channels, the “Smiles at your home ground” TVC reminded Thais to put on a smile on their face during difficult times to sustain the campaign.