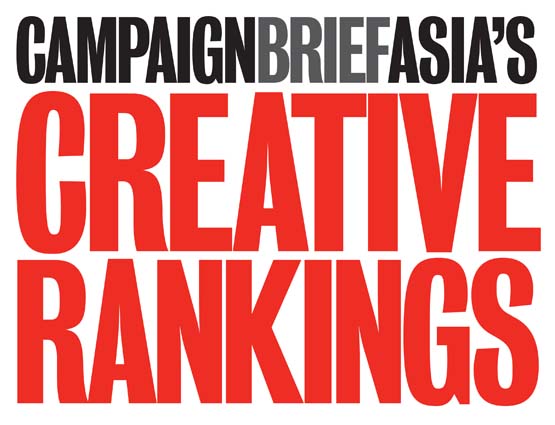 As reported yesterday Dentsu Inc. Tokyo leads all other agencies in the latest Campaign Brief Asia Creative Rankings, which were released this week. Dentsu’s excellent performance across the world and the region’s most important award shows sees them sitting more than 300 points in front of second placed Saatchi & Saatchi Malaysia. Dentsu rose from 4th last year and Saatchi Malaysia moved up from 5th.

Third place this year went to BBDO Proximity Malaysia, whose “Two Worlds” print work for Chrysler Jeep swept up multiple awards at all the award shows that count in the Creative Rankings. This print campaign is ranked number one in the world by The Gunn Report so it’s no wonder BBDO Proximity experienced a huge jump up from last year’s 26th position. 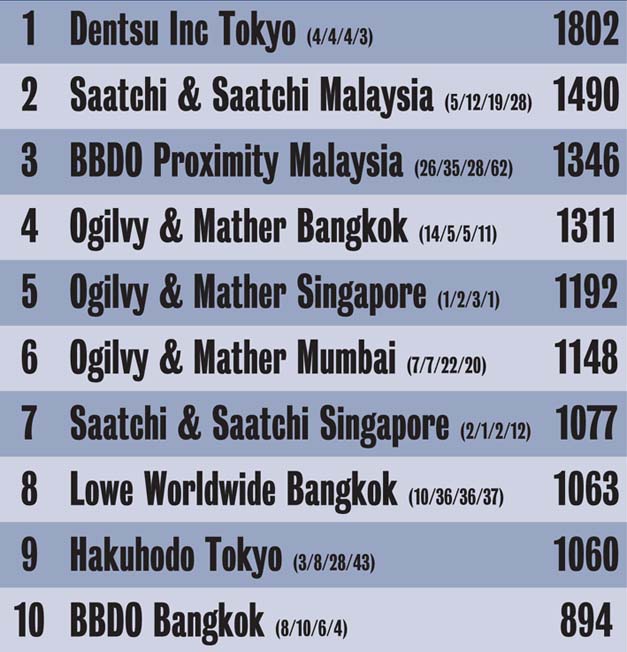 Ogilvy & Mather again performed strongly in the Creative Rankings. They have three offices that fill out the next three spots in the Rankings.

Ogilvy Bangkok were one of the stars of this year, rising up from 14th position last year to 4th. Last year’s No1 ranked agency, O&M Singapore fell to 5th, their lowest position for the past 6 years. Ogilvy Mumbai is 6th, moving up one position on their previous two year position of 7th.

Hakuhodo Tokyo is 9th – down from third last year.

Filling out the Top 10 is BBDO Bangkok, one of the Creative Ranking’s most consistent performers.

This year’s Creative Rankings fills a special 36 page feature in the new edition of Campaign Brief Asia. The Creative Rankings chart the performances of the 161 agencies that have won creative awards over the past two years. It also ranks the 1493 individual copywriters and art directors that have won awards over the past two years.