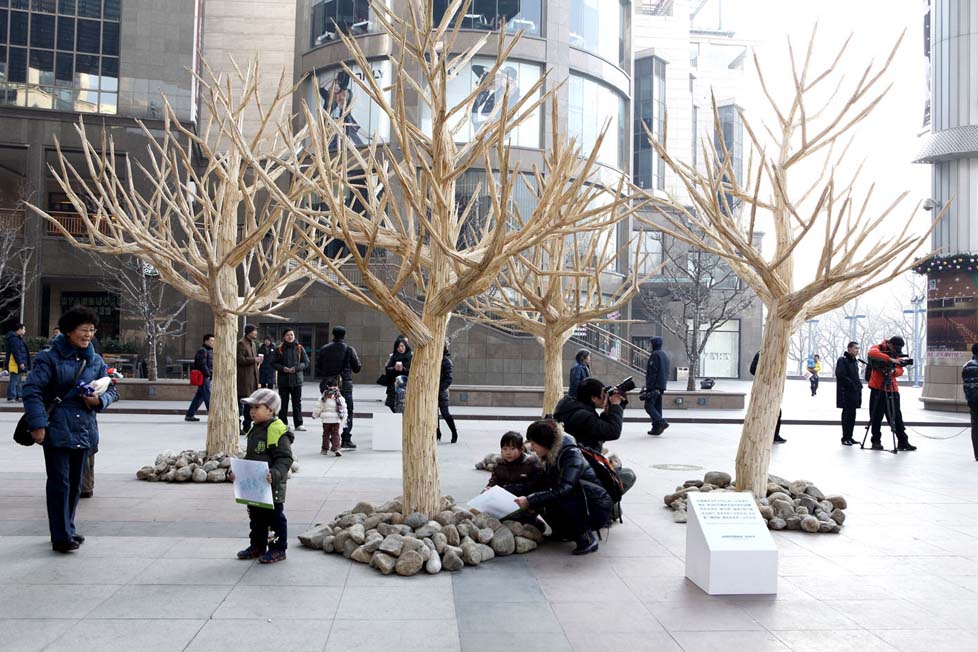 Ogilvy Beijing have planted an eye-catching “chopstick forest” for Greenpeace which was on display outside The Place, a popular shopping center in the heart of Beijing.

In a nation where forest resources are already overstretched (China ranks 139th worldwide in forest land per capita), the mass production and consumption of disposable wooden chopsticks – 23 billion pairs in 2009 – places a further unnecessary and heavy burden on limited forest lands.

With the “Disposable Forest‟ campaign Greenpeace aims to raise awareness of the issue and appeal to the Chinese public to reject the use of disposable chopsticks to protect and conserve China‟s deficient forest resources. Over the last several months, Ogilvy worked with Greenpeace, local artist Yinhai Xu and more than 200 volunteers from 20 Chinese universities to collect more than 80,000 pairs of used (and sanitized) disposable wooden chopsticks from restaurants and repurposed them into a forest of chopstick trees that stand approximately 5 meters tall.

Aihong Li, director of Greenpeace’s Forest Protection Program, said: “These trees should have been abundantly green and vibrant, but now they are pieced together with wasteful disposable chopsticks. Our hope is that everyone in China will join us in saying „no‟ to disposable chopsticks to protect our forests.”

Bill Chan, Executive Creative Director of O&M Advertising/Beijing, said: “We needed to show the public how these seemingly innocuous disposable chopsticks are placing a great strain on China‟s forests. So we recycled 80,000 pairs and brought them back to life as a chopstick forest. We hope this display will leave an impactful impression on people and ultimately change their behavior.”

Greenpeace staff and volunteers including Xiao Wei, lead singer of the Chinese band “The Catcher in the Rye,” tree maker artist Yinhai Xu, Ogilvy staff and students launched the Disposable Forest to the public and media at an event outside The Place on 18 December. During the event, viewers were invited to sign a board pledging their commitment to refuse to use disposable chopsticks and Greenpeace supported their efforts by giving away hundreds of pairs of eco-friendly, reusable chopsticks. The Disposable Forest will be on display at The Place in Beijing for three days. To expand its audience and impact, plans are in the works for the portable exhibit to be put on show at universities and art galleries around Beijing in the coming months.

The public is also invited to pledge their support and commitment to the cause on a mini-site. Each time a name is added to the petition a green leaf will appear on a tree online: http://act.greenpeace.org.cn/kuaizi/

Doug Schiff, Executive Creative Director of OgilvyOne/Beijing, added: “In the last few years we have worked with Greenpeace in China on several interesting pro bono campaigns to promote forest preservation and the dangers of coal use. For Ogilvy, the Greenpeace partnership gives us a great opportunity to use our communications skills for the good of the environment.”