Korea’s total advertising spending has jumped 10.9% to 9.56 trillion Korean Won, or $8.46 billion, in 2011, according to Cheil Worldwide’s annual report on advertising expenditures. The record-breaking figure is attributed to improved consumer sentiment combined with companies’ aggressive marketing campaigns and increased marketing/ad spending. The nation’s ad expenditure has increased two years in a row: the 2009 spending was off 6.9% from 2008 due to the global economic crisis, but both 2010 and 2011 data signals that the market is back on track.

Broken down by medium, ads on the internet jumped 20.0% while TV and print media showed 11.0% and 3.3% increase, respectively.

General programming TV, launched in December 2011, sold $28 million in ads in one month.

Despite the Euro crisis and downturn in developed countries, this year’s growth in the ad spend is expected to be between 5% and 6.3%, higher than the national economic growth rate as there are a few positive signs; general programming TV (four new channels introduced by major newspapers) will continue to increase ad sales, outdoor and print media is increasingly digitalized, and industries are reliant on individual digital media such as smart phones.

Cheil Worldwide’s annual report on advertising expenditures in Korea is an estimate of advertising spending in the country during the calendar year (January to December), representing the advertising media fees and production costs for the traditional media (newspapers, magazines, radio and television), along with those for the satellite media related, Internet, and promotional media categories. (See below for Korea’s ad expenditure breakdown). 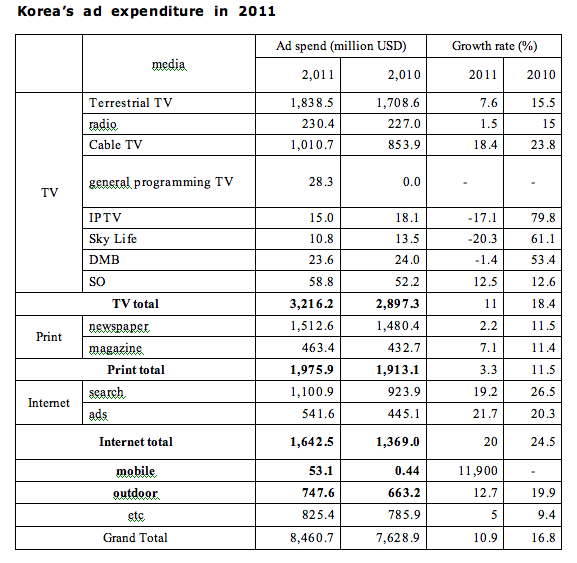