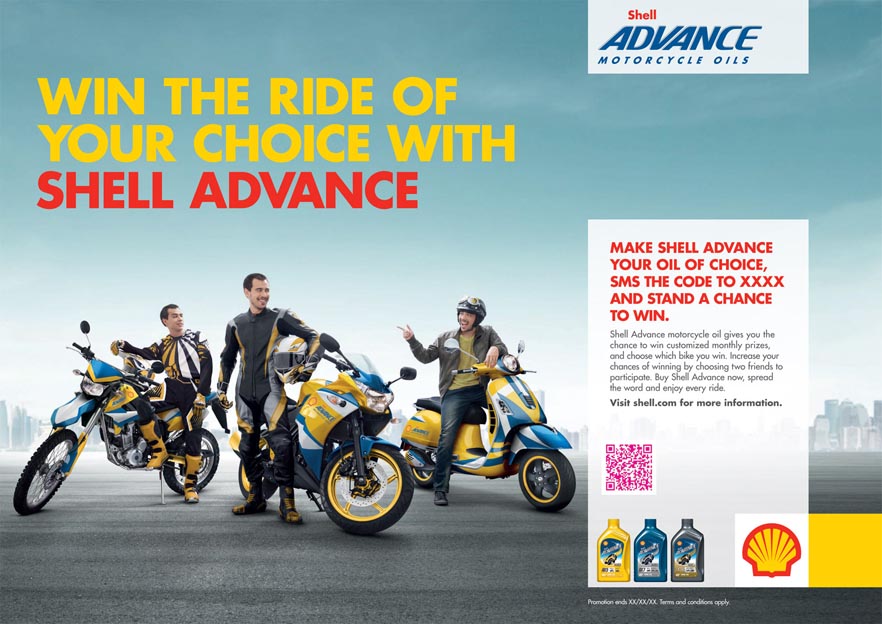 iris Worldwide has partnered with Shell to reach out to motorcycle enthusiasts worldwide by enticing them with the chance to win one of three custom motorcycles when they select Shell Advance engine oil. For the first time ever, the latest campaign, ‘Enjoy Your Ride’ also extends to involve trade mechanics.

Shell kicks off the campaign in Malaysia followed by a gradual rollout into nine other markets around the world. The campaign has been built around the insight that Shell Advance users believe their motorcycles are companions of life or a reflection of their personality and expertise. With this in mind, the campaign messaging and tactics revolves around three key segments – motorcycle riders between the ages of 18 to 39 years old, workshop owners and trade mechanics. 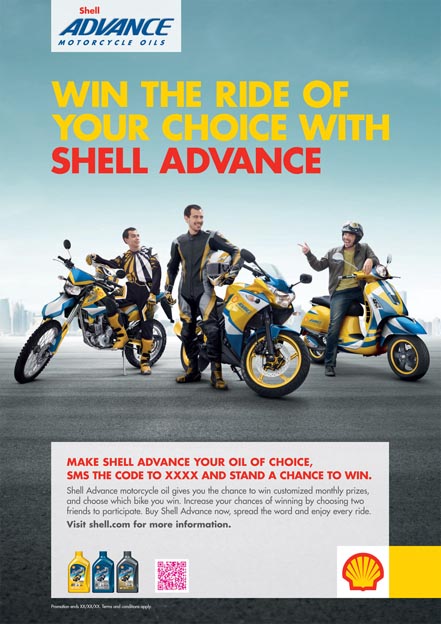 For this iteration of the campaign, Shell aims to excite the consumers by allowing three lucky winners per market to choose from three different custom-liveried motorcycles  as the grand prize. All consumers have to do is send a local campaign hotline an SMS of their particulars and a unique code tagged to each purchase of Shell Advance engine oil.  Aside from the grand prizes, there will also be Shell Advance motorcycle gear to be won. Consumers who enter the contact numbers of two friends can also increase their chances of winning.

Leveraging on the influence that trade partners and mechanics have on a consumer’s purchase decision, iris Worldwide has developed promotional materials which include posters, banners, leaflets, and mechanics’ cheat sheets to help amplify the campaign. To reward these segments as they replenish workshop stock and execute sales of Shell Advance engine oils, a separate contest run in parallel with the consumer activation, will allow trade partners to win a trip to Italy to visit the Ducati factory and attend the GP Aperol di San Marino e della Riviera di Rimini at the MotoGP VIP Village. In another industry first, trade mechanics could also stand to win insurance or scholarships for their family.

“The Shell Advance ‘Enjoy Your Ride’ campaign has been well received by consumers over the years and this year, we aim to appeal not only to consumers but also our loyal channel partners. For the first time, Shell will be harnessing the pivotal role of channel partners as purchase influencers to drive awareness and participation of a campaign,” shared Koh Kar-Tai, Shell Advance Global Brand Manager, Shell.

“The entire campaign for Shell Advance, from strategy to tactical execution is based on deep consumer insight and we’re proud that we’ve been able to build a fully integrated programme that has motivations and rewards built in for the entire motorcycling community in each market. This is a good example of how we’ve helped build Shell as a participation brand in the oils and lubricants category,” commented Craig Mapleston, Managing Director, iris Singapore.