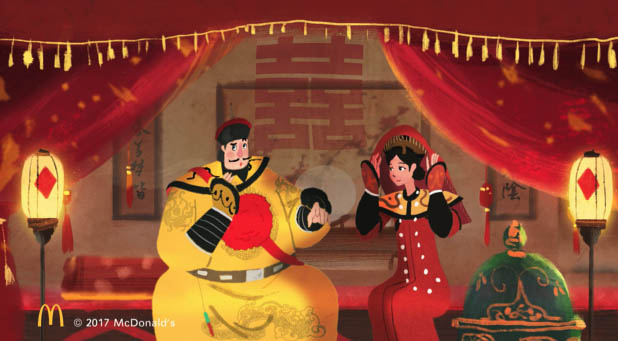 Most people today are probably leading more comfortable lives than the emperors of ancient China, especially when it comes to getting hold of tasty food.

McDonald’s China has highlighted this point in a series of three amusing new videos. These little stories show how the emperors and their wives struggled to enjoy fresh shrimp, pineapple, and lychees. McDonald’s points out how easy it is today to enjoy these succulent delicacies and encourages consumers to visit McDonald’s during New Year and enjoy them without having to wait!

Story 1: This story shows the empress waiting from her wedding day to the birth of her new baby to enjoy fresh shrimp. In those days it took a long time just to make the baskets to catch the shrimp. 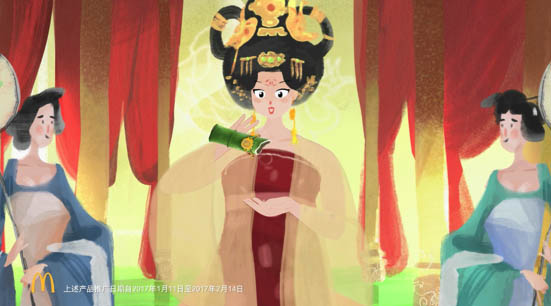 Story 2: This story is about imperial messengers riding horses for thousands of miles until they dropped, just so the empress could enjoy the taste of lychees.

Story 3: This story features a strange exotic fruit covered in vicious spikes that nobody knows how to eat – even with the help of a sword.

Leo Burnett Shanghai created the campaign for McDonald’s newly-launched products to celebrate the New Year. The Lychee Tea and Pineapple Burgers were launched in early/mid Jan, and have received nearly 10 million clicks on Tencent so far as people check out the new tastes. The “Shrimp Burger” was released on Jan 20th, together with a customized McDonald’s advertisement on wechat.

McDonald’s is dedicated to bringing consumers simple easy enjoyment as always. By illustrating these famous historical legends in an unconventional and modern story-telling way, the fast food giant is hoping to bring its Chinese consumers a warm and festive atmosphere to celebrate the New Year. 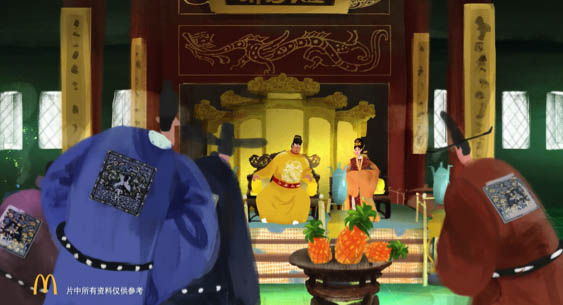 In recent years, costume dramas of ancient court life have become quite popular on TV, so a light-hearted Chinese style imperial theme from McDonald’s is likely to appeal to young consumers.

Rocky Hao, Head of Creative at Leo Burnett Shanghai says, “We call this current fad for costume dramas, ‘Royal Court Syndrome’, and that’s what inspired us to base our new campaign around funny stories of imperial life.”

“But the creative process was full of challenges. We spent a lot of time researching historic files on the internet and even in the National Library, in order to be accurate and yet add interesting twists to make the story more fun. It took quite a while to develop the illustration style; not to mention the music, and the voiceover. We hope this campaign will bring people a fresh feeling about McDonald’s, and of course a little fun and enjoyment when they watch the videos. “

So perhaps there is one more great way to enjoy the New Year this year, to take a trip to McDonald’s and enjoy some tasty food that would make even the ancient emperors jealous.