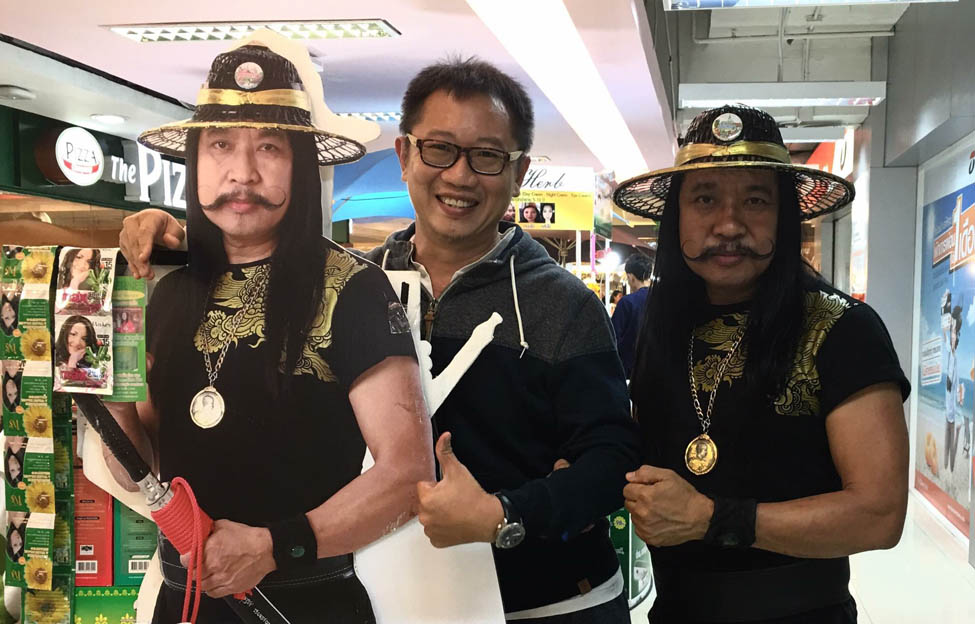 Former advertising high flyer Calvin Soh gives his account of what he learned about the future of advertising, outside of advertising. Soh took a “sabatical” from advertising in 2011 after a distinguished career, most recently as vice-chairman and chief creative officer for Publicis across Asia-Pacific.

I had the privilege of working and learning from some of the best minds in the advertising world, from David Droga to Pat Fallon to Charmaine our receptionist and everyone in between. All of my friends (and enemies) were from advertising. And advertising was all I knew.

So the decision to leave at the peak of my career wasn’t an easy one. My “Why” had to be stronger than the 25 years it took to build my career.

It came down to 2 words: Exponential change (You’ll be seeing these words a lot). And I had to prepare my family and myself for that.

Just what is Exponential Change? It’s driven primarily by Moore’s Law, the doubling of computing power every 18months. This has been going on for over 50 years now. For example, human genome sequencing used to take 13 years and hundreds of millions of dollars. Now, it’s down to 16 hours and under $2000.

Think about it. We’re preparing our kids for jobs that don’t yet exist, while wondering if ours will.

Let me tell you a story of a taxi driver whose job is taken over by autonomous vehicles. At 50, he is too old to learn a new trade and too young to retire. Then with exponential medical advancement, his life expectancy is now up to 120. Now imagine this level of disruption happening across every industry.

That is why I had the courage to leave my career. So what have I learnt? Be Jack of all trades, Master of a few.

That was the biggest mindset change I had to undergo. Now you need to be a generalist and specialist in a few fields. I worked on a proposal to create a digital currency based on the number of miles cycled on city bikes. It’s like reward miles but it’s completely fungible so you can trade or exchange for goods or services. It enabled me to speak at Bitcoin Berlin and meet the people who created Ethereum. I then had a successful Kickstarter with the GIYstick, wrote the Big Red Dot with my son who presented at Ted X, auditioned for MasterChef and designed One Kind House, a 21st century kampong house with soil and hydroponic farming built-in. Was it all completely out of my comfort zone? Did it stretch my mind? Absolutely. An exponential age means you need to keep reinventing yourself to stay relevant.

I came from the industrial age of Learn-Do-Fix. We make everything perfect before it’s launched. On our Kickstarter, we made prototypes out of beer cans, pvc pipes and finally 3d printed models. You are in constant Beta mode, you launch in Beta and refine thereafter.  If you can do that for products, you most certainly can for communications as well. There will be less of the big holy grail tvcs that’s meant to last the whole year. Instead, it’s possibly one small content refined into many based on feedback as the conversations evolve.

I also looked at the lean UX frameworks that followed that principle and thought it could work for planning and creative too. You can adapt the models for different problems and involve the client as well. It’s more dynamic and gets many prototype strategies/ideas out in a short space of time. We have to stop using industrial age methods to solve problems of the exponential age.

I worked with the experiential design agency 8 Inc on a pitch. Their second slide said they designed the first Apple Store, the most profitable retail space on earth. Procurement sat up. Then, they plotted the experiential retail journey based on a 10-year projection of property prices. This time the room sat up. Now think about how ad agencies normally pitch. The way to win business is to demonstrate an understanding of the exponential challenges businesses are undergoing and providing solutions for them.

I met a lot of start ups in SXSW and asked them what they did for advertising. They said if the start up needed advertising, it’s the wrong product. What they mean is baking the idea into the product gets you earned advertising.  How do we apply that to us? You have to start thinking ecosystems and not siloes. Let’s say we know airlines make significant money off their duty free sales. You can merely advertise it or create an ecosystem to find interesting new craft makers, which in turn becomes its own content and creates its own advertising. Exponential growth comes from an idea that allows people to participate and profit off it.  There’s no reason why advertising ideas can’t do that.

Making incremental changes in an exponential age still means you’re being left behind.

If the customer now has a say in the brand, ever wonder where’s their list of Dos and Don’ts? What’s her manifesto? If we’re living in the collaboration economy, where’s the customer’s voice? What happens when the brand and customer guidelines clash? Who wins? I’ve done a couple of research projects where we compiled an in-depth guideline and it’s very interesting how little we really know about them. Which leads nicely to…

One project required me to follow the truck driver for days. How he does business, why he’s in this and how did he end up choosing the truck and motor oil? It provided real insights into his life and that ultimately 500,000 miles before an oil change doesn’t work for him. Not when his truck is his life and he’d rather change oil the minute he senses it needs to. Or when we find out his instructor chooses the oil for him. What big data cannot do is pick up the hopes, dreams and fears that all humans have. You have to be on the ground, in their environment, not in focus groups with tea and biscuits.

I’ve also hosted dinners where you have conflicting groups of people interacting. I’m almost a talk show host, provoking conversations and trying to find the tension points, because that’s usually where the juicy insights are. And those insights will provide solutions beyond advertising. You function as a planner/creative where your guests are focus group/creative team.  I like this because organically very different questions arise from the sessions, way beyond your discussion guide.

With big data, you can subliminally influence or overtly manipulate your audience. You know when, how, who, to deliver a news story, a fake news piece from Macedonia, articles to reinforce bias, and coupled with AI, run customized ads your audience is most receptive to. But only small data can get you under the skin of the customer. So you need both because somewhere in between lies the truth.

If all you have is a hammer, collaborate and get a chainsaw.

I joined a group called 100 voices to tackle educational pressures that sometimes lead to student suicides. We collaborated with Buds Theatre where scenarios were performed and parents or students can change the characters or lines to create different outcomes. No one knew how that would turn out because every performance would be different. But it was both therapeutic and educational because parents/students could project themselves without losing face and they created the real content: Real solutions from real parents and students, acted out onstage. Collaborations allow you to carry a bigger toolbelt so every problem isn’t a nail.

I tell my kids to do what machines cannot do. Machines cannot imagine, feel, love, wonder and empathize. Not yet anyway. I tell them to invent because invention is democratized. Kids build nuclear reactors with everyday materials because the everyday is now advanced. I tell them they will have many careers in their lifetime so they need to have multiple skills, intelligen
ces and side hustles. Curiosity powers lifelong learning and that is their superpower. I raise them to be adaptable and have a growth mindset, and to enlarge their connections and collect as many random dots as they can. I teach them to always ask why and why not. I encourage them to try new things and learn with them. And I tell them to always factor in exponential change.

Many CEOs say the business is like building a plane as you’re flying it. With exponential change, it’s building an interplanetary spacecraft while flying a plane. Cost cutting won’t help but inventing will.

So the new agency culture should cultivate Jacks of all trades and Master of a few, a beta prototype mindset, a large collaborative community to include researchers, craftspeople, content creators, VCs, government funding boards and technical schools. You need to organize teams to Kickstart a project instead of ads for awards (Mr. Terry Savage is a smart man and I’m sure Cannes has a category for this).  Be open and encourage side hustles that enlarge and broaden knowledge. And as more agencies come under one P&L, clients want one strategy. So everyone has to be multi disciplinary experts. Finally, do what the AI CD can’t do: Create stories across ads, ecosystems and product ideas that make you dream, hope and wonder again.

The power machines have is to follow the numbers. The power we have is to create new ones. And if you share this belief, then you will see the world of exponential change filled with exponential opportunities. One to be embraced rather than feared.