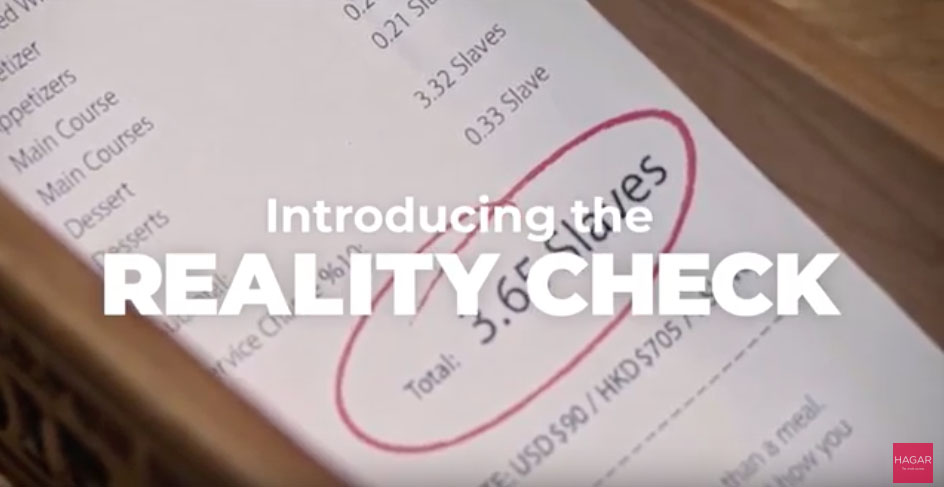 The price of a human life costs as little as a dinner out. That’s the message of the provocative new campaign from anti-slavery organization, Hagar International, on the eve of its 25th anniversary.

Created by DDB Hong Kong, the Reality Check campaign is designed to raise awareness that slavery is not only rife throughout the world, but it’s also cheaper than at any time in human history, the campaign brings the cost of a slave’s life closer to home by unexpectedly incorporating it into restaurant bills.

The campaign is centred around a live activation that took place in a a trendy Hong Kong restaurant. At the end of their meal, unsuspecting diners are presented with a bill that shows the cost of their meal, not in dollars, but in the equivalent human lives they could have bought for the same price. 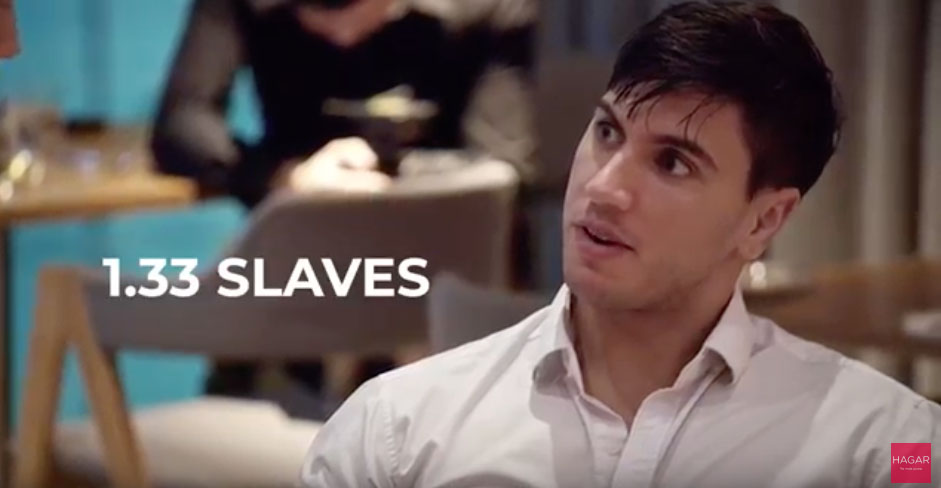 As seen in the campaign video, confusion amongst the diners turns to shock as the waiter explains that a slave today can be bought for an average of USD $90. The diners are then introduced to survivors of slavery who Hagar International has helped to reintegrate back into society – literally bringing them face-to-face with an issue that minutes before seemed worlds away.

The campaign, which is driven through digital, social media, and PR, coincides with Hagar International’s 25th anniversary. Throughout its existence, the organization has been committed to more than simply fighting slavery, but also helping the individuals and communities afflicted by it to recover.

“When you hear first-hand from people who have survived slavery and about the unspeakable physical and emotional suffering they have endured, it becomes impossible to pretend that slavery doesn’t exist,” reflects Melissa Petros, Executive Director of Hagar International. “It was important to include survivors in the Reality Check experience, not only to show that slavery is not some distant and abstract problem but also to demonstrate that with appropriate support they don’t simply survive what happened to them but go on to thrive.”

“Working on this brief, it really hit us hard when we discovered that in 2019, the cost of a human life could be so low,” said Jamal Hamidi, Executive Creative Director, Global at DDB Hong Kong.  “The fact that people’s lives are bought and sold for an average of USD $90 – and sometimes far less – is something that we felt the public needed to be brought face-to-face with, and that’s what we’ve literally done with this campaign.”

Despite the confronting nature of the campaign, the message is fundamentally a positive one. Hagar International’s work over the last 25 years has centred on its counselling, legal, education, and job training services. During that time, the organization has helped almost 19,000 survivors across the world to recover from the trauma of slavery and other extreme abuses, which has had a positive ripple effect on their families and communities as well.

These stories of reintegration and healing are showcased on a campaign microsite, where survivors of slavery tell their stories. At the site, visitors are able to learn more about how they can support Hagar International’s efforts around the world, as well as donating to the organsation.