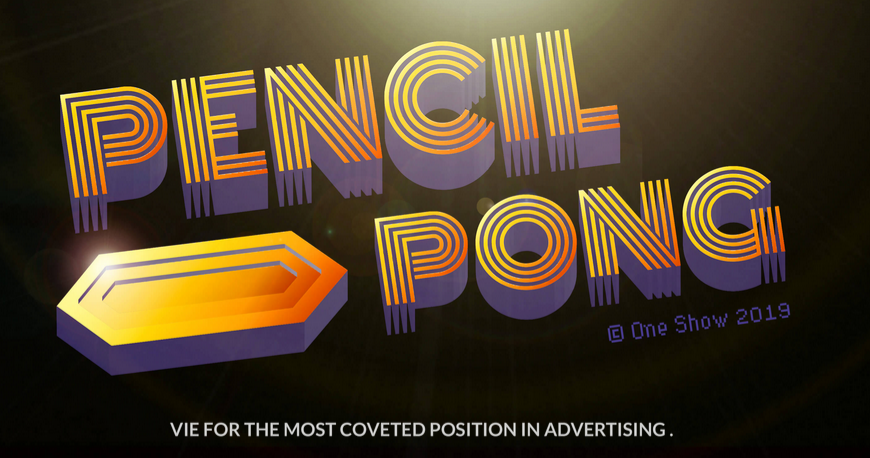 The One Club for Creativity, the world’s foremost non-profit organisation recognising creative excellence in advertising and design, ended off Creative Week with the One Show Awards, last Friday night.

Over the course of the year, Zulu Alpha Kilo created assets for the 2019 call for entries. Last Friday, the agency concluded the “Win Pencil, Draw Respect” campaign at the show by revealing a few surprise pieces, including the online game Pencil Pong which launched globally today.

By using their mobile devices as the pong paddle controls, attendees on the gala night were able to use their pong skills to help propel them up the creative ranks to win One Show gold. You start the game as an intern, move up to CCO. As your career rises, you get to “Tutssel Level” as a global CCO – a nod to Leo Burnett’s Mark Tutssel who was honoured on the night of the gala for his contribution to the industry. Finally, you unlock G.O.A.T. status to win. The losing team is reminded to “enter again next year.”

The site is now live for the world to play by visiting pencilpong.com. Players can play one-on-one or in teams. The first team to hit 9 points, wins the game. The prize? A digitized One Show gold pencil.

Says Zak Mroueh, chief creative officer and founder at Zulu Alpha Kilo: “It’s been an honour working with the One Club on this year’s campaign. With Pencil Pong, we wanted to let the global industry have fun trying to win virtual pencils until next year’s show.”

Along with the game, Zulu developed design assets for the show, including video interstitials, logos animations, background assets, and after-party surprises all under the concept of “Win Pencil, Draw Respect”.

A total of 575 pencils were handed out at this year’s awards ceremony. But even those who didn’t win were still able to walk away with a consolation pencil to start scribbling their award-winning ideas to enter in the show next year. Zulu created a cheeky piece of swag that was at every table on the gala night. The headline read “Everyone goes home with a pencil tonight” and inside the bag was an actual gold-coloured graphite pencil.

Says Kevin Swanepoel, CEO of The One Club for Creativity: “We’ve heard many stories from creatives over the years about how winning a One Show Pencil propelled their career to the next level. So, while this year’s campaign from Zulu Alpha Kilo was tongue-in-cheek, it hit home because the message rang true. We saw a 5% increase in entries this year.”

The One Show helps the industry overall because The One Club is a global non-profit organization that uses awards revenue to give back to the industry through nearly two dozen education, professional development, gender equality and inclusion and diversity programs for creatives at all levels around the world.