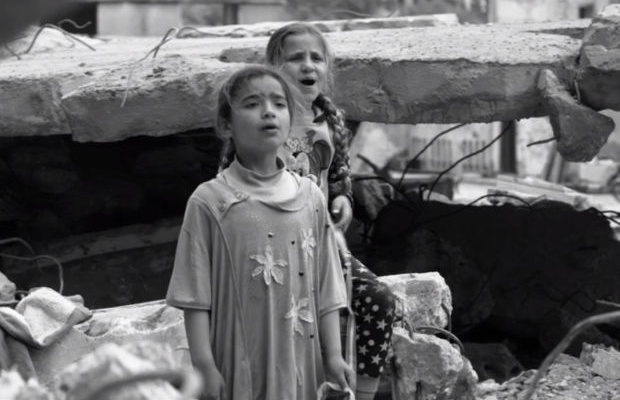 As Sir John Hegarty and nonprofit organisation World Food Programme debuted a new cinema global advertising campaign at Cannes Lions, the advertising legend described the process of making it as “one of the most enriching things I’ve done.” The 60-second spot premiered at the ‘Feed Our Future’ panel on Tuesday and is slated to play on cinema screens worldwide this September.

In front of the packed out Lumiere theatre, panellists explored the power of the cinema audience, the role of creativity in achieving a world with zero hunger, and the inspiration behind this year’s new campaign, which was directed by Somesuch’s Nick Gordon and features a choir of Syrian refugee children.

Speaking on the panel, Sir John Hegarty said: “Advertising’s job is to help build economies. Here we’re applying that tool to charities. The issue is how do we get those charities to stand out in a marketplace with billions of ad spending? How do we create space for those charities?” He added: “With a charity you are trying to create empathy. In fact you can take all the tools you use for a brand – be surprising, create something that’s lasting that people will remember. But what you’re ultimately doing is trying to build empathy.”

Speaking of Yusuf Islam (formerly known as Cat Stevens), whose song was used in the film, Sir John said: “He said you must use this song, wherever you want, but please just make sure the advertisement works.”

Sir John was touched by the experience of shooting the ad with the children. “It’s humbling,” he said. “Some of those children were from Aleppo and other places that were grossly bombed. They’d lost family members, lost their homes. But here they were participating in something.” He remarked that it was a huge challenge for them to learn the song in a language they didn’t know, “but their enthusiasm for it and the way they engaged with it – you could see how their hope in what they were doing was spreading hope to other people. It was a privilege to spend time with them.”

Executive director David Beasley noted: “Every five seconds a child dies unnecessarily from hunger. That’s why it was important for me to be here, as you in this room, you here have the opportunity to take the mediums available today and help us cut through the clutter to change the world.”

Building on insights David shared about how wives of ISIS fighters had told him they wouldn’t have joined if it weren’t for the desperate need to feed their families, Sir John highlighted that “hunger breeds terrorism. If we allow this to go on you are breeding terrorism.”

Underlining the hope that the UNWFP brings to conflict and hunger-stricken areas, Terry stressed the hope that runs through the film: “Even amongst the devastation, there is a power of hope there. And it’s reason enough for us to support the World Food Programme.”

“When you get children food, and help them go to school, it’s so rewarding. It’s become the purpose of my life,” said Corinne Fleischer, World Food Programme.