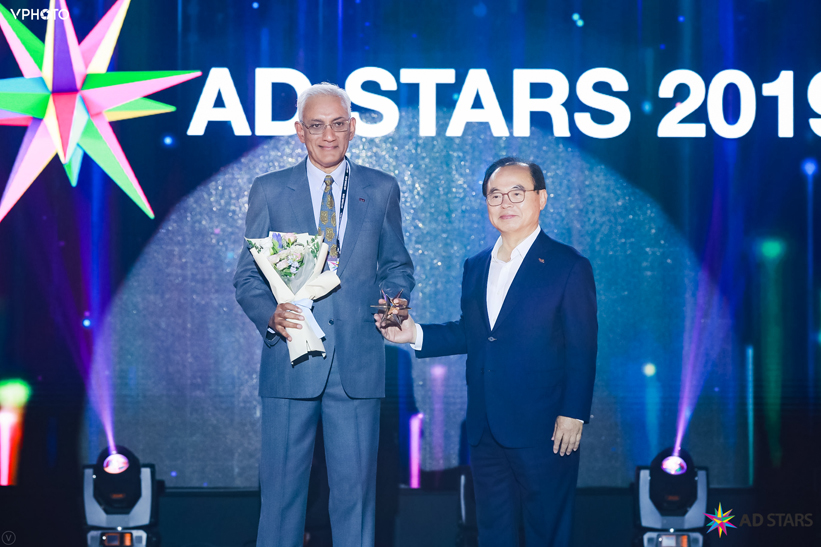 At the recently concluded 12th edition of AD STARS held in Busan, Korea, Srinivasan Swamy was recognized with Korea’s highest honour for his significant contribution to the advertising industry.

AD STARS is considered as one of the largest advertising festivals since it receives over 20,000 entries of creative work from nearly 60 countries, with Jury members from as many countries evaluating and awarding excellence in creativity.

Swamy is the Chairman and Managing Director of R K SWAMY BBDO, one the reputed advertising agencies in India. He also is the Chairman of the R K SWAMY HANSA Group, which has units like Hansa Customer Equity, Hansa Research, Hansa Vision, Hansa Events, Hansa Medcell, Hansa PR, Hansa Outdoor, Hansa Consulting etc. The group employs nearly 3000 people and has revenues in excess of US$ 100 Million, serving over 100 clients.

On receiving the award, Swamy said “I am humbled and honoured to receive the award on behalf of all my industry colleagues who helped me make a difference to the various tasks we addressed together. The industry is at a transitional phase with issues of enhanced data privacy regulations that could change the way we communicate with our various target audiences. We will do our bit to provide the direction we need to take, over the next couple of years”.

Swamy has been earlier recognized in various forums for his outstanding contributions. He has received the Lifetime Achievement Award from both AAAI and Rotary Club of Guindy, the Distinguished Service Award from Advertising Club Madras, and was recognized as IAA Global Champion at the inaugural Inspire Awards in London, by IAA Global. He was inducted into the IAA Hall of Fame instituted by the India Chapter. Japan Advertising Agencies Association recognized him with their Merit Honour for his singular contribution to the formation of CAAAA and thought leadership.