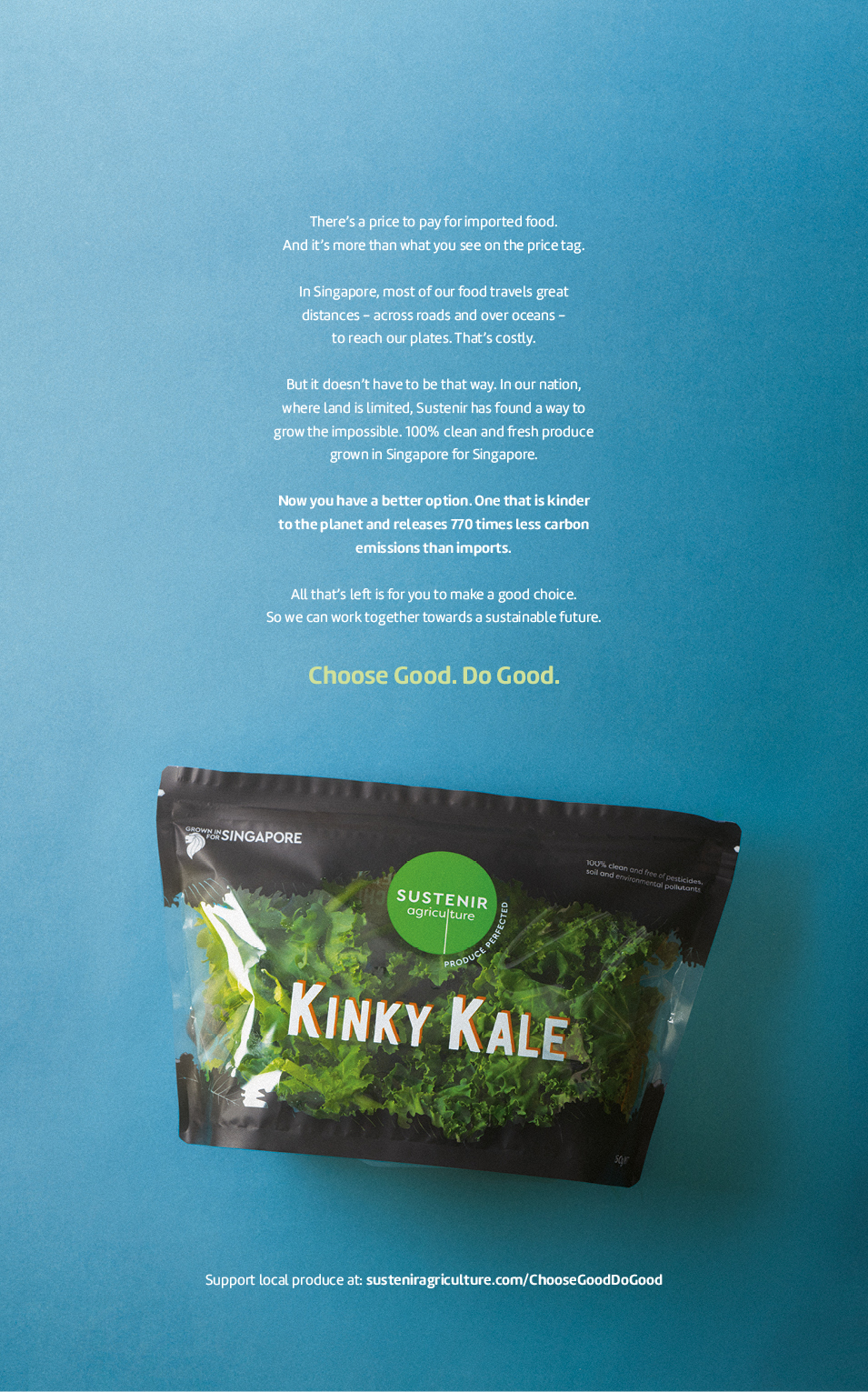 Iris has launched Choose Good. Do Good. campaign for hydroponic farm, Sustenir. The first-ever brand marketing campaign is a rally cry aimed at motivating Singaporeans and the rest of the world to take small steps to mitigate climate action and reduce carbon footprint by choosing local.

The campaign features a world-first consumer facing carbon currency that highlights the difference between imported food and Sustenir’s vertically grown products, along with some shocking facts unearthed through the creation of this currency. This simple message is relayed via a nation-wide campaign through print, out-of-home, social media, influencers and PR.

Ben Swan, co-founder and CEO of Sustenir said, “As a country, Singapore has limited land and resources. The carbon currency shows the environmental impact and the huge carbon debt the small nation owes to the world. We hope that Choose Good. Do Good. is an enabler of better choices and encourages everyone to build a better world one step at a time.”

Swan added, “Today, more than ever, the world needs a sustainable future and a commitment to build a circular economy by using fewer natural resources such as land and water, and maximising yield that is nutritious and harvested every day.” 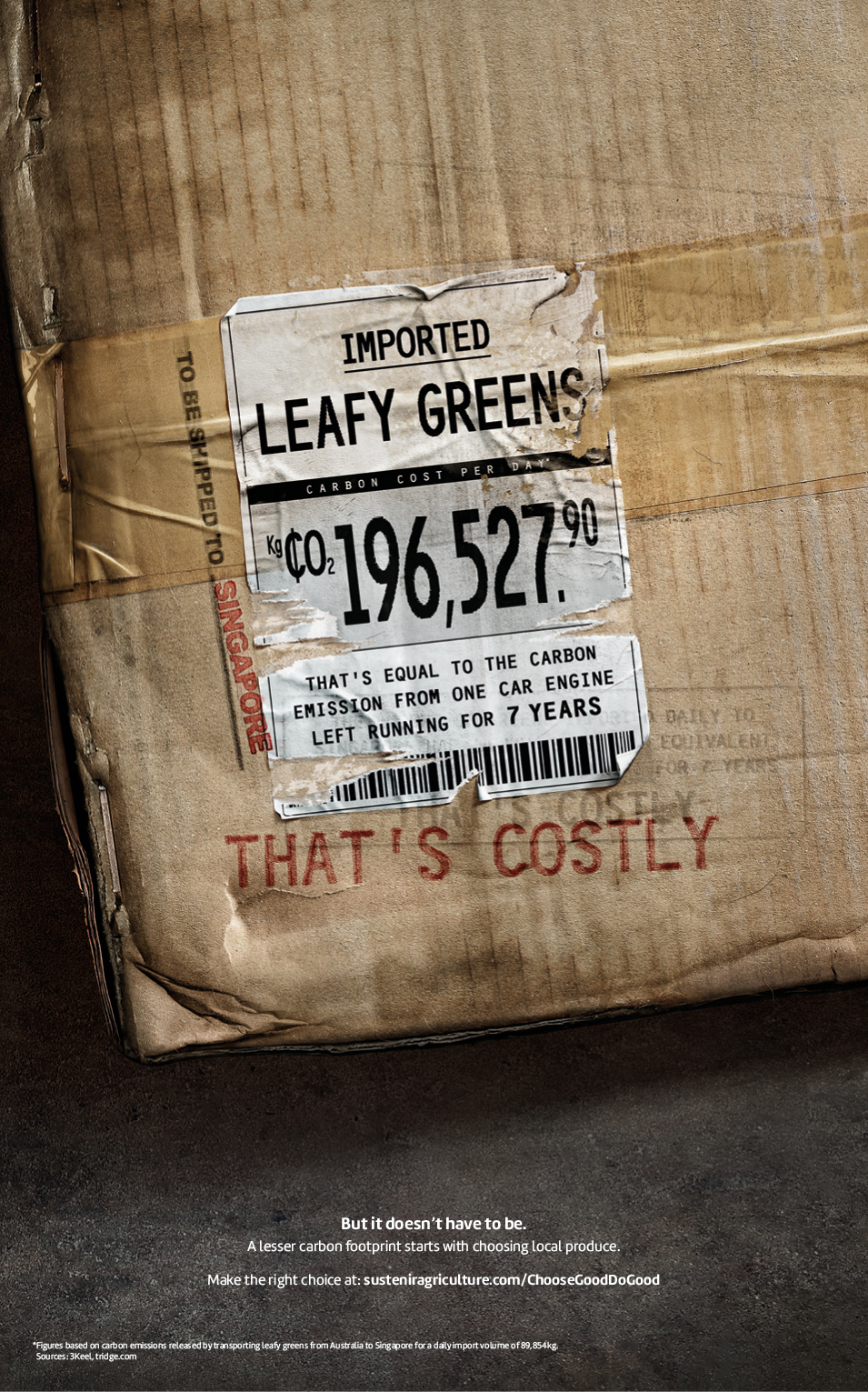 Masagod Zulkifli, Minister for the Environment and Water Resources for Singapore stated, “The Intergovernmental Panel on Climate Change estimates widespread declines in crop yields of up to 25 per cent by 2050 due to climate change impacts. Singapore is also exposed to the volatilities of the global food market, because we import over 90 per cent of our food supply. We need new paradigms in the agri-food industry. Supporting our existing farms to innovate and increase productivity is a key pillar of the “Grow Local” strategy. We will expand production in state-of-the-art indoor farms. Farms such as Sustenir and Panasonic optimise plant growth and increase yield exponentially through high-tech solutions like LED lighting and climate control. By controlling growing variables, these farms are climate-resilient, and can maintain high quality. The Government will spend almost $400 million towards research and innovation in water, circular economy and climate change and food. These significant investments will help us to explore greater possibilities across the food-water-energy-waste nexus, achieve new results, and scale up.”

Sorcha John, Managing Director of Iris Singapore said, “While most people are aware that adopting sustainable ways of living are critically important, so often good choices don’t exist, or isn’t convenient. The magnitude of the climate crisis and the rhetoric that surrounds it, often means that individuals feel powerless in making a tangible difference. This campaign is Sustenir’s first opportunity to raise awareness of the true environmental cost of imported food. Through this work, we hope to help Singapore understand how important individual actions are in creating the much-needed global change.”

Founded in Singapore in 2013, Sustenir was lauded by Singapore Prime Minister, Lee Hsien Loong, for being a key initiative in his “30 by 30” vision that will enable the island nation locally produce 30% of its nutritional needs by 2030 to help ensure food security and combat climate change.

Rooted in Asia, Sustenir aims to be the first international hydroponic farm to grow “impossible foods in impossible places”. It started by growing kale and arugula in its vertical farm. It successfully grew strawberries in 2017 and has since expanded its product range to include 3 kinds of juices and pesto to their existing range, plus an upcoming spinach, lettuce and kale mix.