The WARC Effective 100, an annual ranking of the world’s most awarded campaigns and companies for marketing effectiveness, is now published. Providing an independent benchmark for excellence in effectiveness, it is the last of the three WARC Rankings to be released, following the recently announced Creative 100 and Media 100.

The Effective 100 Ranking is compiled by WARC, the international marketing information company, and is produced by combining the results of the industry’s most important global and regional award shows for effectiveness throughout 2019. The awards tracked are determined by the WARC Rankings Advisory Board and a worldwide industry survey.

The most effective campaign of 2019 is It’s A Tide Ad, by Saatchi & Saatchi New York / Hearts & Science New York / MKTG New York for laundry detergent brand Tide. Tide became the most loved brand of the Super Bowl and grew consumer loyalty in the US by hijacking other popular ads with the message that if there are clean clothes, it’s got to be a Tide ad. Within two weeks, sales of Tide products increased by 35% and within a year, sales increased to over $75m.

Says Andrea Diquez, chief executive officer, Saatchi & Saatchi New York: “We’re so incredibly proud that TideAd has ranked #1 for effectiveness. I can only attribute our success to an extraordinary partnership with a very brave client, an amazing and highly diverse agency team and a group of partners that helped us push boundaries and make this idea even bigger than we could have ever imagined.

“TideAd embodies everything we strive to achieve as an agency. It changed the way other brands behave in the Super Bowl, blurred the boundaries between media, entertainment and marketing and engaged the audience in a compelling and unprecedented way. In the end, this is just more great proof that powerful ideas drive business results.”

In second place is Oyster Kanji Dictation for Hiroshima Tourism by I&S BBDO Tokyo / BBDO J West Hiroshima. The campaign increased oyster consumption by launching a workbook that educated citizens about the food. In third is National Safety Council’s Prescribed to Death, a campaign by Energy BBDO Chicago / PHD Chicago to raise awareness of prescription opioid overdose in the US.

There are three agency rankings in the Effective 100: creative, media and digital/specialist. Ranked #1 creative agency is FP7 McCann Dubai, which climbed 13 places to first place after working on six of the top 100 campaigns. AMV BBDO London is up from 11th place last year to second. CHE Proximity climbs from 9th to third.

In top position of the digital/specialist agency ranking is Dentsu Aegis Network’s MKTG New York, having worked on top placed campaign, It’s A Tide Ad. MRM/McCann Shanghai takes second place and Ayzenberg Los Angeles third. All three agencies are in the rankings for the first time.

McCann Worldgroup holds its position at the top of the networks ranking for effectiveness for a second year in a row, significantly ahead on points of BBDO Worldwide in second place. Ogilvy is in third.

Says Suzanne Powers, global chief strategy officer, McCann Worldgroup: “Our mission of helping brands earn a meaningful role in people’s lives is not just mantra to us. It’s a methodology and approach that helps our teams around the world create amazingly impactful work. This top ranking recognizes that focus, and, of course, the great clients with whom we have the honor of working with every day to drive those results.”

The top nine places in the holding companies ranking remain unchanged from last year,with WPP remaining at the top for a second year. Omnicom Group follows in second place and Interpublic Group is in third.

Regularly top of the table, last year’s top two brands for effectiveness switched places with McDonald’s coming out on top, ahead of Coca-Cola. IKEA is in third. Despite McDonald’s having one campaign in the top 100 – The McDelivery Pin – a further 30 other campaigns from around the world earned points for the fast food retailer.

Says Colin Mitchell, senior vice president, global marketing, McDonald’s: “We’re honored to be recognized for the effectiveness of our marketing in this prestigious ranking. Effectiveness is what we strive for day in and day out. In an industry often fixated by the short-term, this gives a sense of the long-term value of what our marketers do.”

For a third consecutive year, Unilever is the top advertiser in the Effective 100 Rankings by a significant margin over The Coca-Cola Company in 2nd place. Unilever’s Lifebuoy is ranked 11th in the brands’ table and a further 32 brands collected points contributing to its first place ranking.

USA retains the top spot in the country table, but for the first time since the Effective 100 ranking began in 2014, the UK has dropped from second into third place, with India moving up to take its place. The UAE is the biggest mover in the top 10, rising from 29th last year to 5th this year. 71 different countries registered points.

The most highly ranked campaigns and companies in the 2020 WARC Effective 100 are: 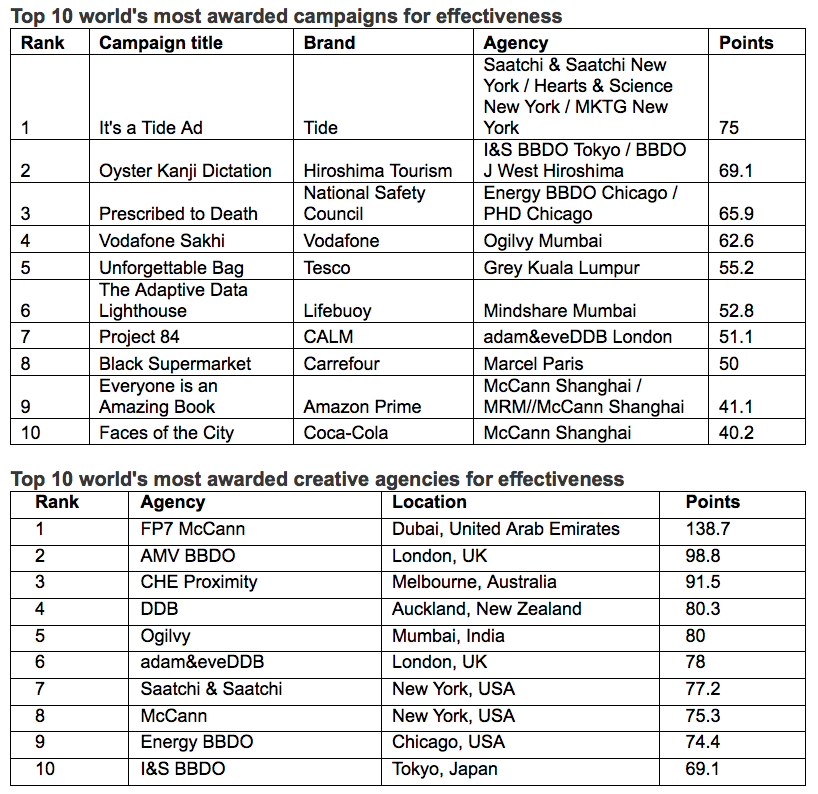 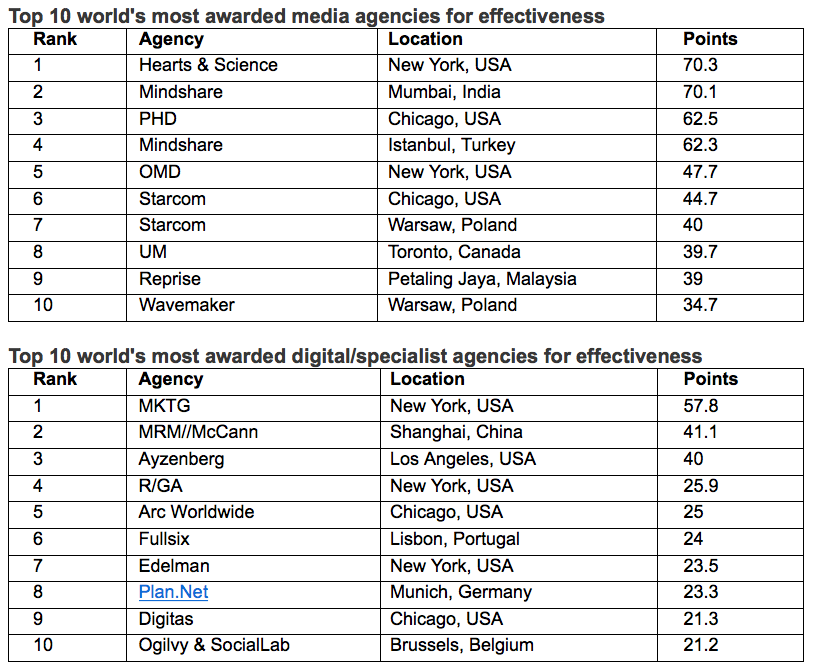 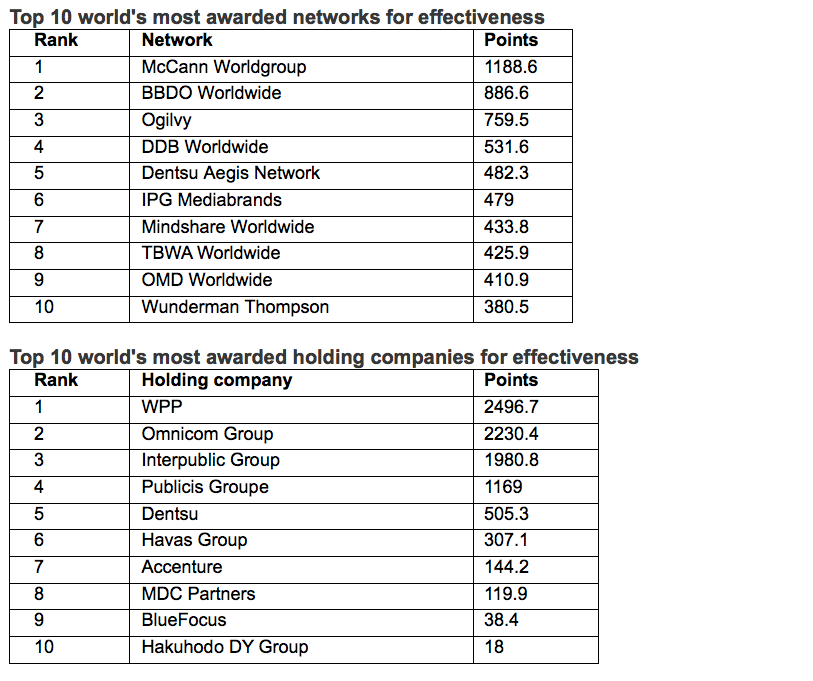 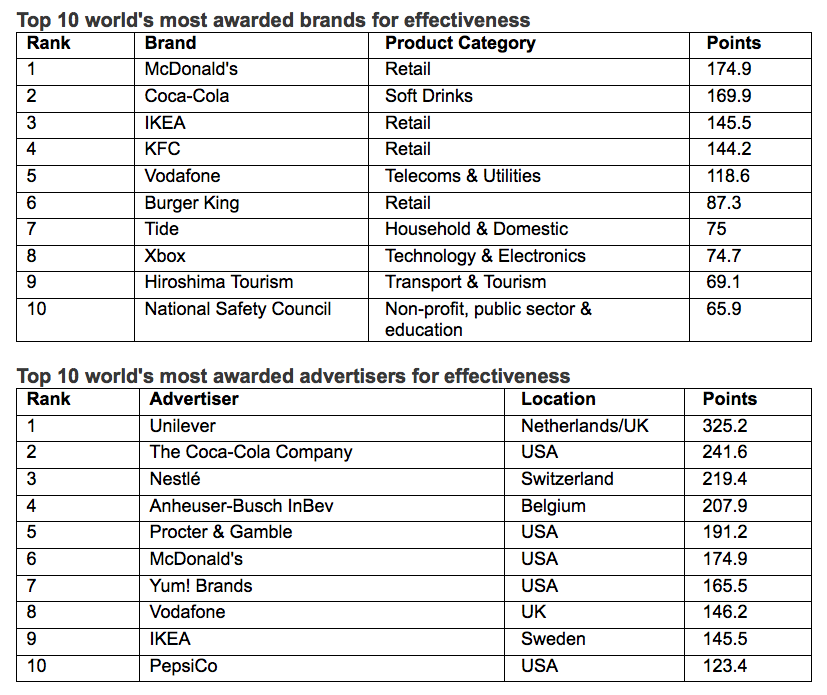 Says Amy Rodgers, managing editor, research and rankings, WARC: “In this year’s Effective 100 we see that there is no single route to effectiveness. While the top campaign, Procter & Gamble’s It’s a Tide Ad was a big TV idea during Super Bowl, CALM’s Project 84, ranked #7, was a real-world stunt to generate earned media; and Lifebuoy, ranked #6, used data-driven services to save lives in rural India.

“Other approaches in the top 10 include behavioural change ideas, new product development, and corporate repositioning.”

The WARC Effective 100 has been compiled by applying a rigorous, unbiased and transparent methodology to the analysis of the results of the most important global and regional creative awards shows, as determined by the industry following consultation with the newly introduced WARC Rankings Advisory Board and a worldwide survey. This consultation and survey will be carried out each year to ensure that the Rankings continue to reflect the opinion and meet the needs of the industry.

An analysis of the WARC Rankings and brand stories report will be released on 31 March. The WARC Creative 100 and Media 100 are already announced.