Beyond the outbreak: How Covid-19 will affect the global advertising market 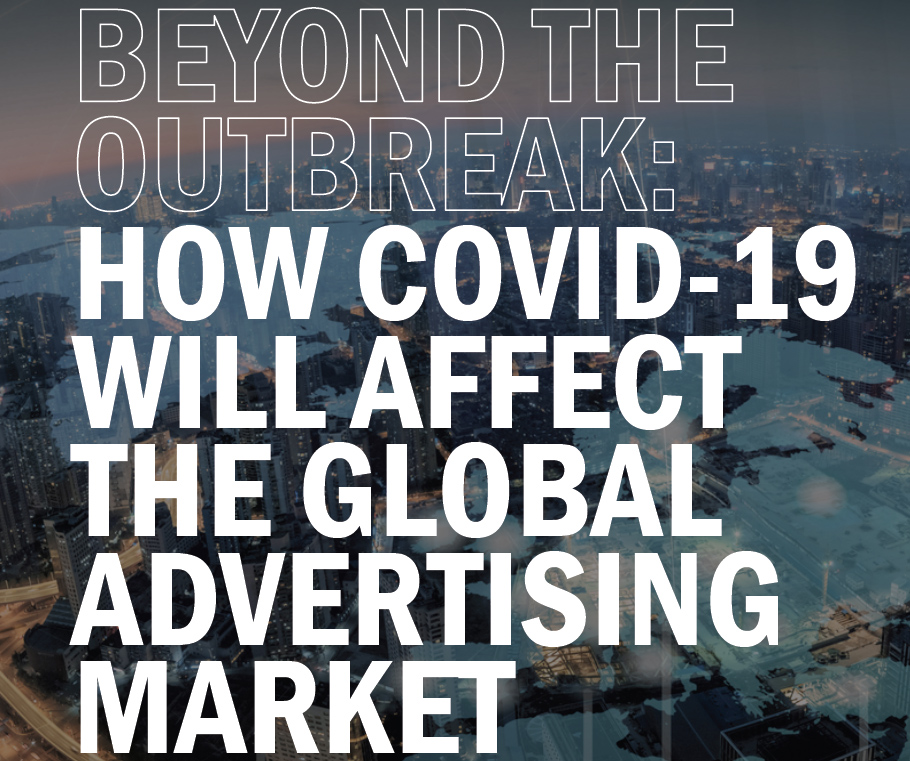 MAGNA, the centralized IPG Mediabrands resource that provides strategic investment and media intelligence for agency teams and clients has published a special report looking at the impacts of Covid-19 on the global economy and the global advertising market.

The report recaps the latest economic forecasts for 2020 and what we should expect in terms of relative severity of the business impact, across industry verticals and advertising formats.

KEY FINDINGS
• The Covid-19 pandemic has ended a long cycle of economic growth for the US and the world. Macro-economists in financial institutions (e.g. Standards & Poor) are now expecting global and US GDP growth to be flat at best for full year 2020 assuming the epidemic is under control by May/June and normal economic conditions resume in 3Q, generating some growth in the second half.

• Digital media ad formats will be the least impacted, due to the acceleration of digital media usage and ecommerce during the outbreak. Nonetheless, global digital advertising is likely to slow down to single-digit growth this year, compared to +20% per year in recent years.

• Television may remain relatively resilient due to pre-existing spending commitments, viewing increases and the fact that core client verticals (e.g. CPG) will be relatively unscathed. Radio ad sales may suffer more, as automotive commuting stops for weeks, and OOH ad sales will be severely hurt by the quarantines but may recover faster too than others.

TOP TEN TAKEAWAYS
1. The Covid-19 epidemic is now slowing down in China, which shows that extreme isolation works and curbs the contagion within 4 to 6 weeks. That means Europe and North America are now facing at least five weeks of quarantines and business closures that will hit the economy, before business gradually comes back to normal.

2. In the meantime, the Covid-19 outbreak already caused a collapse of stock markets and macro-economists are revising downwards their forecasts for economic growth in 2020.

3. The current consensus among macro-economists is that a global recession in the first half (negative GDP growth in Q1 and Q2) will be followed by a recovery in the second half. If so, the global economy may stagnate in 2020, instead of growing by +3% as previously expected.

4. Western Europe, where the economy was already slowing down before the outbreak, may fare worse. China experienced negative growth in the first quarter for the first time in 40 years, and full-year growth is now expected to be between +3% and +5%, compared to +7% in recent years.

5. Many industry sectors may decrease marketing and advertising spending this year as a result of slower sales and profits. MAGNA expects the impact on revenues to be severe for the Travel and Restaurant industries, moderate for Retail and Automotive, mild for Consumer Packaged Goods (CPG/FMCG) and potentially positive for Ecommerce and Home Entertainment (SVOD).

7. In terms of media owners’ advertising revenues, digital media ad formats will be the least impacted, due to organic growth factors, e.g. the explosion of ecommerce. Nonetheless, global digital advertising is likely to slow down to single-digit growth this year, compared to nearly +20% per year in the last eight years, and +12% in previous MAGNA forecasts for the year.

8. Among linear ad formats, television will remain relatively resilient due to pre-existing spending commitments and the fact that its core verticals (CPG/FMCG) will be relatively unscathed by the outbreak and the economic slowdown.

10. Radio ad sales may suffer more, as automotive commuting stops for weeks, and OOH media sales will be severely hurt during the outbreak as train stations and highways remain empty. OOH media may recover faster than other media, however, due to its strong performance and client mix (technology).

The Magna Intelligence Team produces more than 40 annual reports on audience trends, Media spend and market demand as well as ad effectiveness. To ask any questions, access full reports and databases or to learn more about our subscription-based research services, contact forecasting@magnaglobal.com.