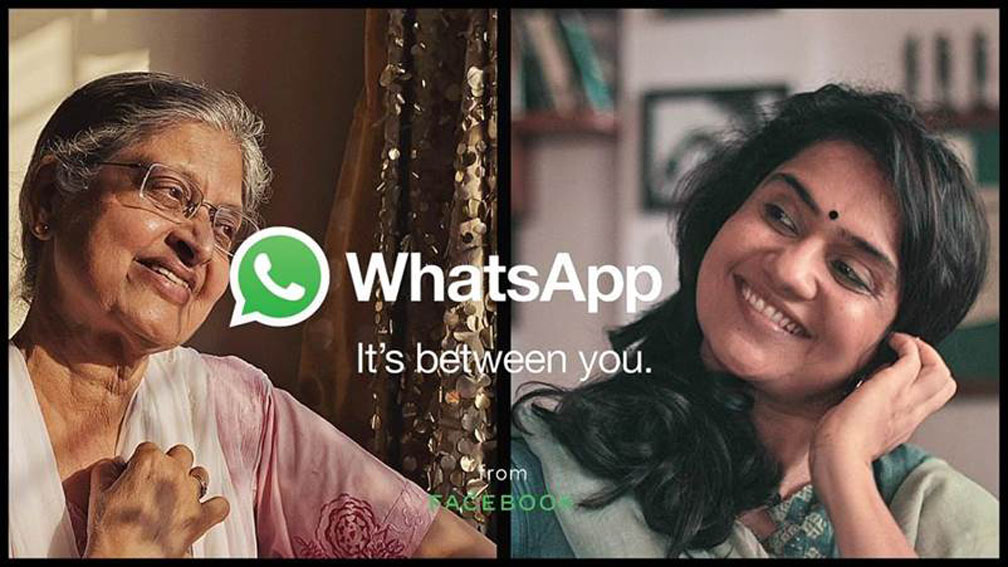 WhatsApp and BBDO India have launched its first brand campaign ‘It’s Between You’ in India that narrates real stories about how Indians communicate daily on WhatsApp with their closest relationships.

The campaign brings alive WhatsApp’s commitment to privacy which is not just a feature but a feeling, that is underpinned in its end-to-end encryption.

WhatsApp is serving as a crucial lifeline with people relying on the platform to communicate with their friends and family, to feel an emotional connection while often isolated and separated across long distances. It has increasingly become a safe space for people to communicate freely and experience real relationships with their loved ones.

The campaign is built on the core belief that when privacy is deeply felt we can communicate as our true selves and experience real relationships.

Josy Paul, CCO and Chairman, BBDO India said: “WhatsApp was looking for a campaign that would talk to its 2 billion users globally. The task was like branding oxygen. It’s already there, we just had to give it greater meaning. The idea had to be truly global and yet connect locally. How do we define a place in people’s hearts for WhatsApp to live – the basis of an emotional connection that is ownable and sustaining. We began with the product. WhatsApp’s privacy can be quite liberating. It leads to greater intimacy and real human connections. The brand idea ‘It’s between you’ is a simple capture of that feeling. It’s what led us to real human stories where intimacy liberates you in so many ways. It was like drafting the constitution of a great nation called intimacy in just three words ‘It’s between you’.”

Avinash Pant, Director – Marketing at Facebook India said: “We communicate in different ways with different people, and that is the very essence of our personal connections. What you say and the ability to be yourself comes from the assurance of privacy. With WhatsApp’s end-to-end encryption, we come closest to replicating real-life interactions and that’s when we can truly be ourselves. The conversations you have, the jokes you tell and the memories you relive belong to you and deserve to stay between you.”

WhatsApp collaborated with Gauri Shinde, a celebrated Indian Bollywood director along with BBDO India to create two sixty seconds ads that capture moments that make you and your people feel together while using the platform. Each film highlights how WhatsApp’s features like texts, video calls or even a voice message, help replicate in-person conversations and bring people closer.

Talking about her unique experience of directing these films remotely, Gauri Shinde said: “Firstly, I completely loved the idea of ‘It’s between you’ for WhatsApp, because it’s such a personal brand for all of us and we all use it in our own way. Secondly the two stories just touched my heart. And finally, the new experience of remote shooting has been challenging and exciting in equal parts. From how to bring together the cast and crew that were right for the part and happened to be living together, and directing over a WhatsApp video call, to doing all the post production work without being physically present, it’s been really rewarding and we are really proud of what we have created.”

Media can view these films on the WhatsApp YouTube page that beautifully convey that social distance doesn’t mean emotional distance.

The first film is based on a true story about an elderly woman and her caregiver, who are now separated from each other. The lady is seen to be sharing her most private moments with her nurse over WhatsApp through a text message, an audio message and a video call at different times of the day, which makes her feel connected, cared for and fulfilled.

The second story is at the other end of the spectrum of emotion, which is a light and fun film about a younger sister giving joyful courage to her elder one through a WhatsApp video call, when the latter feels vulnerable and hesitant to give herself a haircut at home.

VIEW THE CUT IT OUT FILM