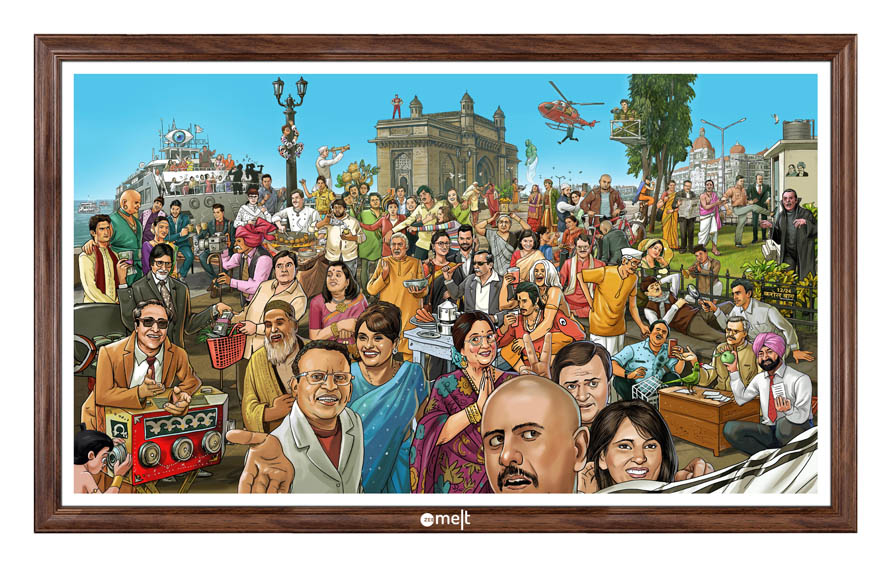 BBDO India has launched this new interactive poster, featuring 58 memorable characters from TV shows from the last 40 years. The poster went viral over the weekend and was created as part of the launch of the ZeeMELT 2020 event.

The poster is a gathering of memorable characters from 58 of India’s most iconic TV shows set near the historic Gateway of India promenade. It brings back memories of TV shows that were broadcast across Doordarshan and Hindi GECs from the unforgettable Bharat Ek Khoj to today’s Big Boss and KBC.

The BBDO India team that created this image studied the history and impact of Indian TV programs before zeroing in on the final 58 iconic characters. Due to the lockdown, a visit to the Gateway of India location was not possible. So, Google Earth was used to get a 360o view and understanding of the real-time location and perspective where the characters and shows are set.

Teaming up with one of India’s most awarded illustrators, Deelip Khomane and his son, Sushant Khomane along with the BBDO team including Sandeep Sawant (ECD), Hitesh Shah (Head of Production, Mumbai) and Yash Modi (Creative Director) went through each show to carefully capture the look, behaviour and nuances of every character before finally deciding on the final illustrations.

Each character, was carefully choreographed and intricately and sensitively designed, illustrated, colored, and added to the poster. The whole process took 7 weeks from conceptualization to completion. The illustration alone took a month to wireframe and finish.

The iconic poster was launched on 3rd September as a part of ZeeMELT and continues to circulate social media as viewers try and guess all 58 shows in the visual.

“The painting is a wonderful example of communications riding on popular culture. TV is popular culture in India and across the country, much time is spent of discussing TV content and thousands of social media messages discuss the developments on TV shows and the performances of characters.” said Rajesh Kejriwal, Founder and CEO of Kyoorius, the people behind the ZeeMELT event.

“We’ve tried to capture the memories and times of the last 40 years through the characters who gave us our most memorable TV moments, and added life to our living rooms. The result is not just a guessing game, it’s an outpouring of nostalgia, an interaction with our own past – a glorious look at where we come from.” said Josy Paul, Chairman and CCO, BBDO India.