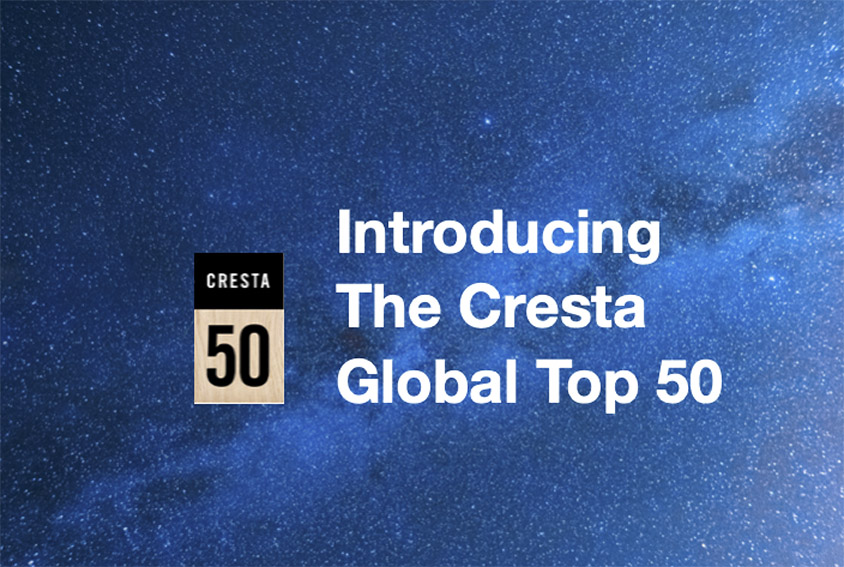 For more than 27 years Cresta Awards has acknowledged creativity in advertising, design and communications around the world, from 75 countries in its last competition.

For the first time, it has analysed who are the Top 50 highest-performing agencies worldwide, published today.

Agencies from across the Asian region have made the list. Four Japanese offices lead the way – Dentsu, Dentsu West, Dentsu Creative X, and TBWA Hakuhodo, while Taiwan supplies two more, with the Taipei offices of Leo Burnett and Wunderman Thompson. BBDO Guerrero from Phillipines, Ogilvy Singapore and Cheil Hong Kong all make the elite 50.

The USA comes out as the country topping the table, with seven agencies listed. A surprise joint second, with the United Kingdom, is the United Arab Emirates with five agencies. Sweden matches Japan with four entrants, ahead of Germany, which has three representatives.

The strong performance by Dentsu was influential in the company winning the first ever President’s Award presented by Cresta, while BBDO has held the Cresta best network title for the past two years.

The Cresta Top 50 is displayed alphabetically with no ranking within. It is derived from points assigned to the various level of awards won by the agencies at Cresta, from Grand Prix down to Shortlist positions.

“After a very open and large entry last year, with some great winners, we felt it would be rewarding to see what trends were sitting across this all globally,” says Cresta President Alan Page. “Beyond the headline trophies, we wanted to pull out those agencies who performed most consistently at a high creative level, and what that says for creative trends by country.”

“The result is that we can see many familiar names and places but there are also surprises in who made the Top 50 and who didn’t. There are smaller nations with outstanding centres of creative excellence that punch well above what you might expect. Conversely, there are larger nations that might do more to shine stronger on the world stage.”

Cresta CEO Lewis Blackwell, said: “Our first Top 50 deliberately avoids a numbered listing so as to just shine the light broadly and show global trends. For any agency to be on it is a terrific achievement, given the size of the industry worldwide… and also when you consider all the strong players who perhaps just missed out.

“There’s an opportunity to upset the list and get back on it next time of course. There’s no fear or favours given by our jury. By sheer quality and quantity of work that wins over our judges, anybody can make it through and star at Cresta. It really is on merit. It might seem that some nations punch above their weight… and some don’t. The world and Cresta is very open to redrawing the creative map.”

Cresta exists to inspire, recognise and reward great creativity in communication. The 2021 Cresta Awards call for entries is now open. The awards are assigned by a purely mathematical averaging of the votes of more than 120 jurors acting independently. This is a system that Cresta claims is fairer as it helps avoid jury politics, factions, or the influence of strong personalities, as may be experienced at group jury meetings and discussions.