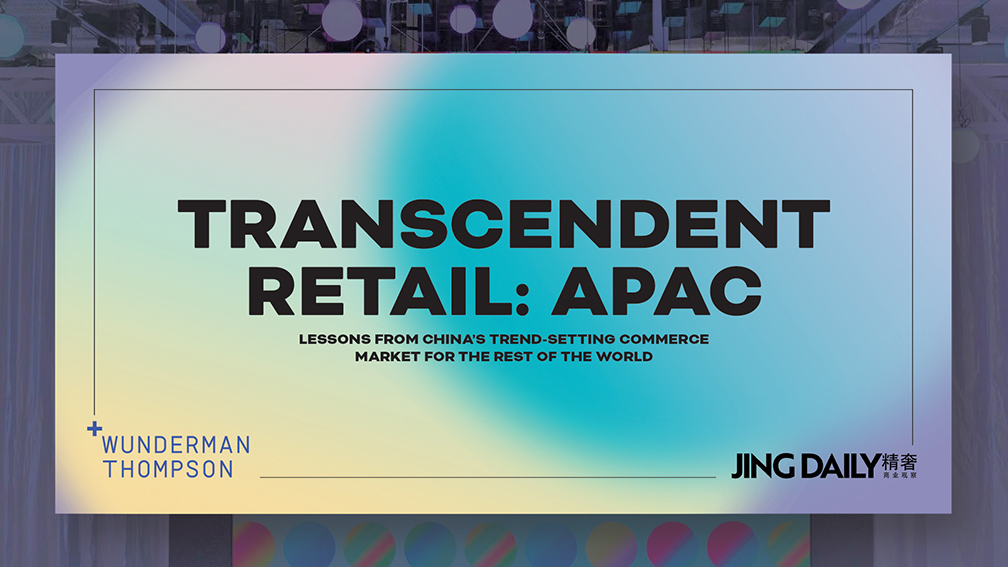 In its latest trend report, “Transcendent Retail: APAC,” Wunderman Thompson Intelligence, in partnership with Jing Daily, explores emerging trends in the world’s biggest commerce market – China – and assesses the readiness of local markets to embrace them.

This year, China is expected to become the first country in the world where more than half – or 52% – of total retail sales originates online. This compares to 29% in South Korea and 15% in the United States, according to eMarketer.

The report identifies opportunities for brands interested in selling to Chinese consumers as well as brands tapping into China retail trends landing on their own shores. It also includes survey data from more than 10,000 consumers in China, India, Indonesia, Thailand, Japan and Australia; interviews with experts and takeaways for brands.

“China is setting commerce trends for the world,” said Chen May Yee, APAC Director for Wunderman Thompson Intelligence. “Chinese tech giants and global brands alike are trying new ideas first in cities like Shenzhen, from where they spread across China and its borders. No global brand can afford not to pay attention.”

“New formats that blend content and commerce — such as livestreaming sales broadcasts, gamified physical retail stores, and virtual worlds that invite brand participation — have taken off in China and now the rest of the world is looking to emulate its successes,” said Jing Daily Content Director Sky Canaves. “The great willingness to experiment with making shopping more relevant and entertaining for consumers is yielding results with far-reaching implications.”

Key Trends
Among the report’s highlights:

The rise and rise of live commerce: Part infomercial, part entertainment and hosted by an influencer, live commerce took off in the 2020 lockdowns, when more than 1 million viewers tuned in to watch Alibaba’s Tmall’s 618 shopping festival livestream. Now it’s moving up the value chain to luxury and crossing borders as brands target overseas markets.

The Clicks-and-Mortar Store: Physical retail stores are taking on digital bells and whistles, from QR codes on products to social media apps and “social currency.” Meanwhile, web-only retailers are investing in pop-up stores, leveraging off their social media followings.

Brands get in the game: Brands are collaborating with the biggest gaming platforms to launch virtual possessions from clothing to cars. For example, Aston Martin, Maserati and Tesla have all offered virtual cars in the massively popular Game for Peace. With almost 518 gamers in the country, China is the world’s biggest gaming market where 56% of mobile gamers are female and 47% are under 30 years of age.

Boomers are the new Gen Zs: China’s seniors are the last untapped demographic when it comes to commerce, but not for long. Post pandemic, 81% of over-55s Chinese consumers are now more comfortable using digital technology. This has led to the rise of the Senior Influencer, with one example being Grandma Wang Who Only Wears High Heels, an 80-year-old KOL with over 16 million followers on Douyin.

Readiness of Other Markets
Just as the pandemic sped up the evolution and adoption of these commerce trends in China, it did the same elsewhere as record numbers went online. The report includes analysis of data from Wunderman Thompson’s Future Shopper survey of 10,158 consumers in China, India, Indonesia, Thailand, Japan and Australia that show these shifts.

For example, while 80% of Chinese say they intend to shop more on social media platforms in future, 88% of Thais, 78% of Indians and 69% of Indonesians say they do. The numbers of Australians and Japanese intending to shop on social media are lower though still significant, at 45% and 25% respectively. 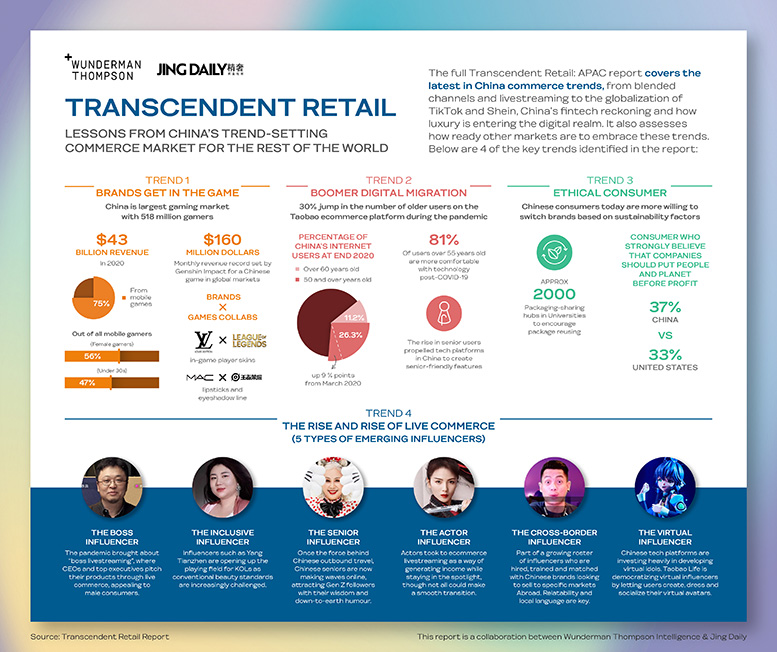