It is said that music has the power to heal. So, MTV in collaboration with Ogilvy India have launched ‘Memory Karaoke,’ an empowering initiative to help those living with early Alzheimer’s cope with memory loss.

Did you know, India has 5.91 million people affected with one or other forms of dementia, of which over 65% of people are affected with Alzheimer’s disease in 2021, and by 2030 over 7.6 million people could be affected by dementia and Alzheimer’s. While the wonderful memories we create every day can last us a lifetime, these statistics mirror the harsh realities of a significant part of our population whose memory is fading away at an alarming rate.

Emphasizing how ‘Forgetting Isn’t Funny’, Memory Karaoke, a custom-created karaoke will feature four foot-tapping songs on MTVMemoryKaraoke.com, based on commonly forgotten information by those in the early stages of Alzheimer’s. With these songs meant to be practiced daily along with caregivers, MTV hopes to leave a positive impact and also raise awareness about this progressive disease that presently has no cure.

In an attempt to create a deeper impact and remove social stigma across geographies and reach out to a wider population, MTV has also joined forces with one of India’s largest non-profit groups, the Alzheimer’s & Related Disorders Society of India (ARDSI) as Knowledge Partners for this initiative. ARDSI which is affiliated to Alzheimer’s Disease International (ADI), is active pan India, and is recognized for its selfless work which includes providing specialized care services for those living with Alzheimer’s. MTV will leverage its widespread presence, thus giving wings to initiate and empower professionals, students, and caregivers in the Alzheimer’s month. Additionally, under this initiative MTV has also on-boarded doctors to create more awareness and educate the masses about the disease.

The custom-created karaoke tracks will enable the person, their family, and their caregiver to sing-along songs that hold important details about the person such as their home address, name, meals, etc. While they hum along as the lyrics appear on the screen like in karaoke, the person over time will be able to remember their information enjoyably and musically.

Written by Ogilvy, the songs are composed by the musical genius Komorebi, an alternative electronic act from New Delhi, and the musical baby of Tarana Marwah, an Indian composer, singer-producer, and instrumentalist, who has also lent her voice for the tracks on Memory Karaoke as her grandmother, too, was living with Alzheimer’s. Moreover, to uplift moods and maintain humour MTV has collaborated with a young comedian to educate and spread awareness.

Anshul Ailawadi – Head, Youth Music and English Entertainment at Viacom18, said: “Music is nothing less than manna for one and all. MTV Memory Karaoke elevates this very role of music to a higher plane by making a small yet significant difference to the lives of those affected by Alzheimer’s and their caregivers. We at MTV are humbled by the opportunity to be a part of this initiative.” 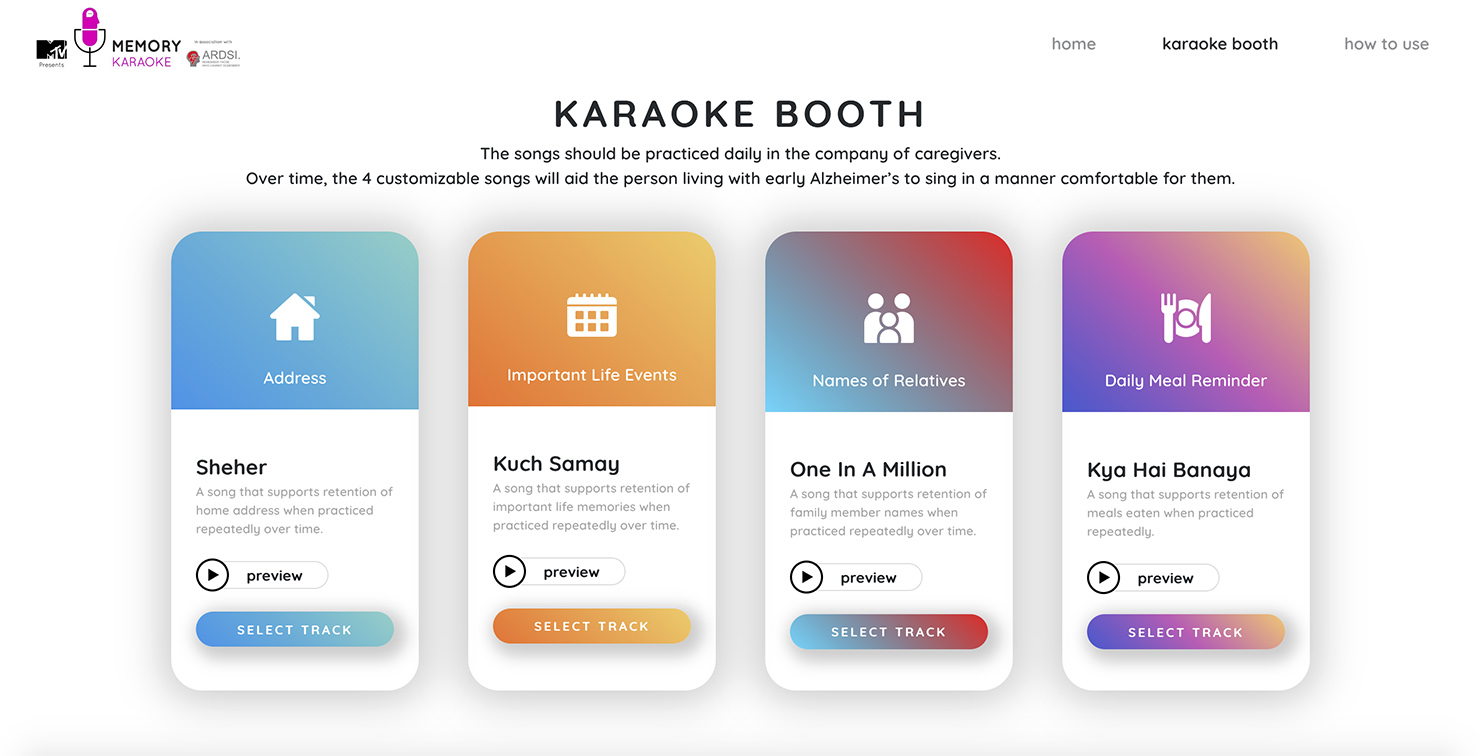 “Music is a therapeutic tool for the mind, body and soul. Memory Karaoke will be an enjoyable, assistive aid for those with early Alzheimer’s to RETAIN. REMINISCE. RECALL”, says Vidya Shenoy an integrative therapist and dementia care specialist who is the Secretary-General of ARDSI.

Akshay Seth, Group Creative Director, and Chinmay Raut, Senior Creative Director at Ogilvy Mumbai, said: “Growing up, we’ve all experienced how retaining new information would become easier whenever it was set to a tune. With the same being true for those with early Alzheimer’s, we wanted to create a platform where tracks could be customized by the family member by entering important information of the affected member as lyrics. Memory Karaoke offers personalized songs for both to practice daily, resulting in better retention and recall over time. The mission is to introduce an enjoyable, daily ritual that takes away the frustration and helps the caregiver and the person with early Alzheimer’s to eventually sing in a manner comfortable to them.”

“Memory Karaoke is very close to our heart. We strive to put technology to work to make life easier. This was a perfect opportunity to put tech into action for those living with Alzheimer’s and their caregivers. We are proud of the way our team put AI to use in the creation of customisable karaoke videos to help improve memory recall through music. This project has given us all at Ronin Labs a vision of how technology can be for each and everyone of us. We are both honoured and humbled by this opportunity to work with MTV, Ogilvy and ARDSI”, says Sumeet Basak, CEO & Co-founder of Ronin Labs.

While normal day-to-day memory lapses can lead to a lot of ludicrous mea culpas for many of us, for a big part of our population, it can be quite distressing. Thus, this Alzheimer’s month, MTV along with Ogilvy urges you to sing along, because ‘Forgetting Isn’t Funny’.