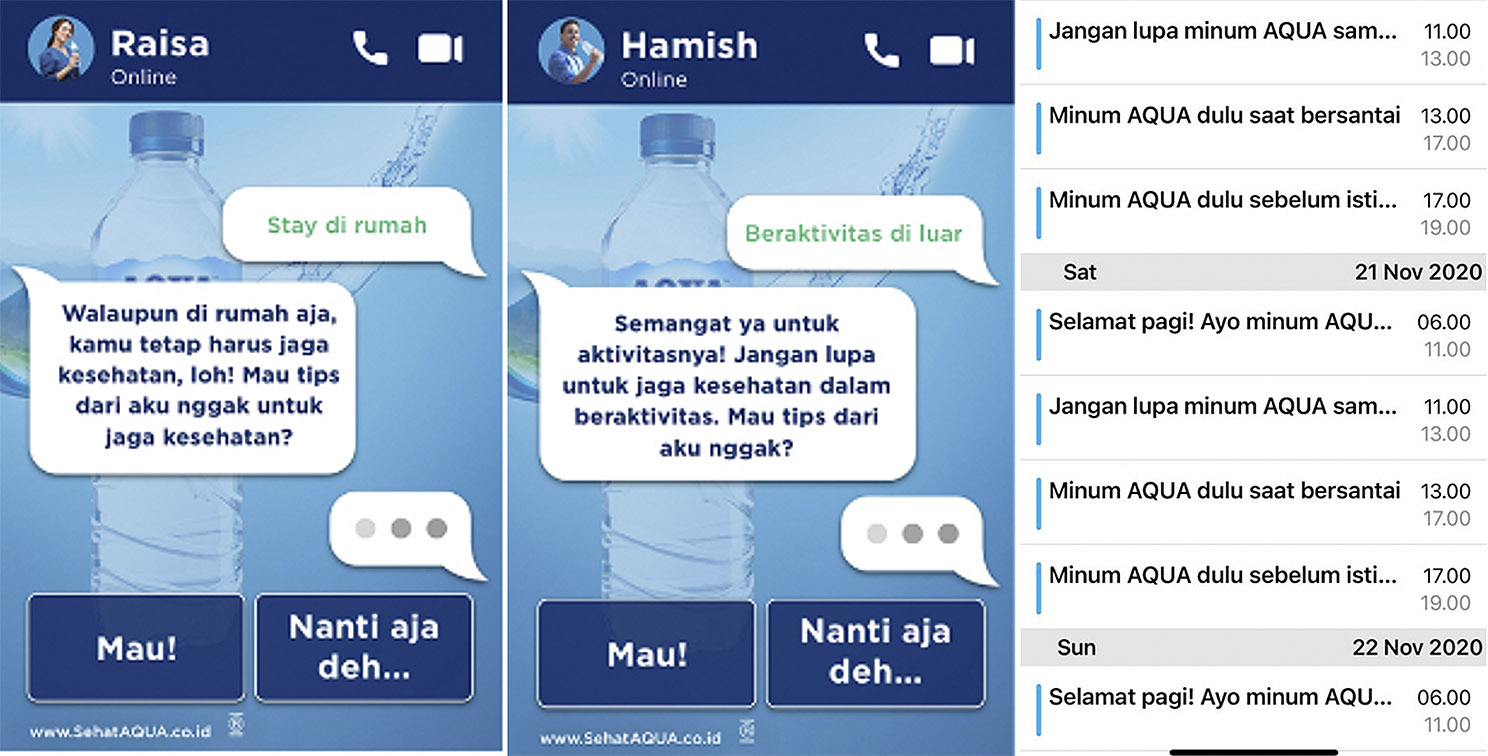 From November to December 2020, Danone partnered with XAXIS and Wavemaker Indonesia for an ad campaign for its water product, AQUA, that encouraged the Indonesian population to drink more water.

Harvard Health notes that healthy people require between four to six cups of water per day, or about 1.5 litres. Danone conducted an internal study which found that four in ten people drink less than one litre of water per day; well below the recommended minimum intake. With the added pressure of a global pandemic threatening the health of the Indonesian people, Danone felt it was important to encourage people to stay hydrated.

Danone wanted to focus on four different audience categories – mothers, fathers, teenagers, and young adults. Audience demographic insights were obtained from GroupM’s data management platform, enabling Danone to learn more about its audiences’ lifestyles and mobile habits. Since Indonesia is a mobile-first nation, with 97% of its Internet users accessing the web via their mobile phones, mobile marketing presented the best opportunity for Danone to reach its target audiences.

A mobile-exclusive chatbot function was deployed to allow users to interact with brand ambassadors Hamish and Raisa in a conversational format. The husband and wife duo is a prominent Indonesian influencer couple with more than 25 million Instagram followers combined. After a chat interaction with Hamish and Raisa, users had the option to subscribe to a year-long calendar reminder that would remind them to drink water four times a day.

This interactive campaign generated more than 13 million impressions and reached more than 7 million unique users. The campaign saw a conversion rate of 3%; three times higher than Danone’s projected conversion rate. Overall, more than 433,000 people clicked on the campaign’s call-to-action. Furthermore, a brand lift study by Xaxis showed that 30% of the people who saw the ad intended to increase their water intake.

“Xaxis’ technology has enabled us to create a conversational ad banner that is highly personalised. Measuring pre- and post-behaviour of the campaign, we were thrilled to discover that 30% of those who watched the ad were positively influenced and intended to increase their water intake to over one litre. This allows us to stay true to our purpose in AQUA which is to deliver the goodness of hydration in all possible ways and we look forward to partnering with Xaxis and Wavemaker in the future,” says Ethan Lim, VP of Marketing, Danone Waters Indonesia.

“We are pleased to partner with AQUA as we believe in supporting brands with a mission to improve the lives of people. Through our data-driven and AI-powered programmatic execution, we were able to closely target the campaign goals of AQUA and provide them with the digital expertise needed to boost their ad campaigns. This campaign exceeded everyone’s expectations and we are happy that more people are drinking more water,” says Yunnita Avreda, Country Head, Xaxis Indonesia.

“This innovative campaign has delivered outstanding results, not just in terms of cost-effective engagement and conversion, but also in the creative execution. Mobile phones play a central part in Indonesians’ purchase behaviours, and we wanted to reach them where they would be most engaged. We partnered with Indonesian influencers that are well-respected and have a high level of influence among AQUA’s target groups, and we achieved our objective of helping Indonesians drink more water,” says Novita Sandra Devi, Digital Lead Danone, Wavemaker Indonesia.