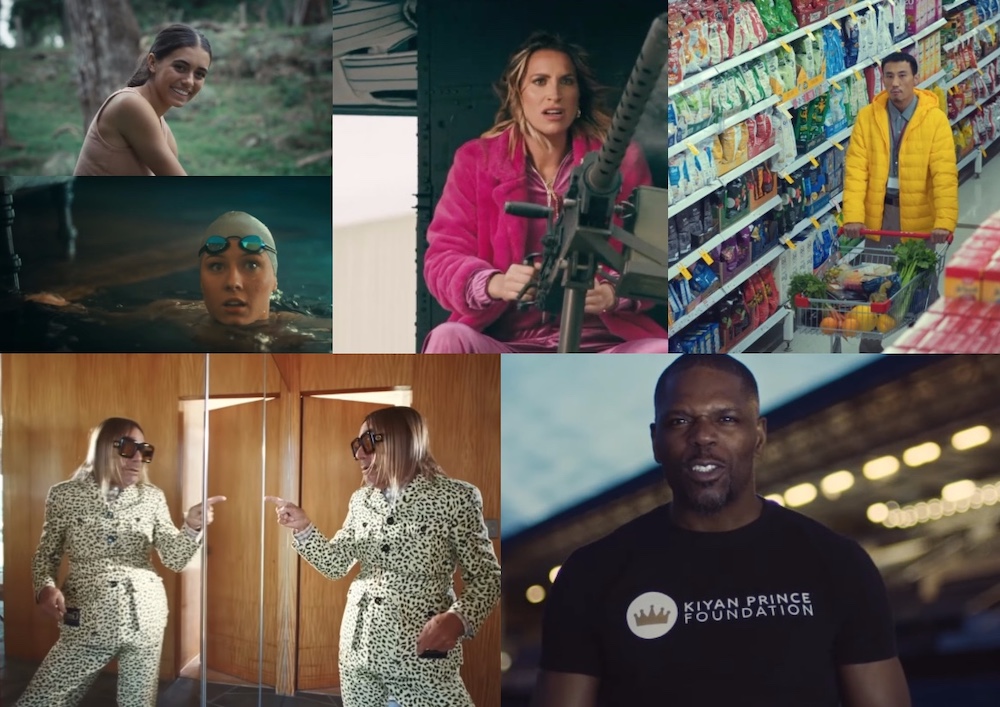 Let’s get straight into a curly one. What was your highlight of 2021?

Was it that time you left the house, went for a walk and you saw someone? Or the moment the basil plant in your kitchen grew a leaf? Or that time you opened the dishwasher to discover someone else had emptied it?

Identifying a highlight this year – or even remembering anything of any note – is surprisingly hard. It was the year nothing really happened. Like really.

It all feels like a bit of a blur. Which I’m led to believe is how Damon Albarn refers to his recollection of the 90s.

2021 has felt like one long drawn-out moment of working out what to watch on Netflix. You’re totally in the dark, a little overwhelmed and afraid to commit to anything, but kind of desperate for something to get excited about and will settle for anything, especially if it involves squid or octopus.

But change the question to what was your lowlight? And for all kinds of reasons, the options start flooding to mind.

Even beyond the recurring waves of Covid, there was the end of democracy, that horse puncher who simultaneously kicked an own goal, crowdless sport, a global climate conference which reached no conclusion other than humanity’s own, seriously weird weather, the billionaire space race, and the myriad of times you opened the dishwasher to discover someone else hadn’t emptied it.

As the suitably droll voice in Juan Cabral’s Burger King film pointed out: “Wondering whether we were working from home or living at work was confusing.”

And frankly, neither felt like they were particularly likely to lead to any decent creative breakthroughs.

For most creative types, the notion of turning up on time to every meeting was groundbreaking enough.

And in Australia, it’s fair to say this was not a golden year. Out of the Olympic swimming pool anyway.

But what about those uncommon souls who had to go and ruin it all and make us feel doubly worse about everything we were doing by producing creative work which could have shone in the brightest of years?

Yep, the folks at Uncommon London played a peaky blinder. And for them it seems Brexit didn’t lead to a crexit, but rather a crenaissance.

If we’re talking highlights, sink your teeth into these. ITV’s ‘Drama vs Reality’ and ‘Britain Get Talking’ and ‘It’s Been A Year’ campaigns, B&Q’s bright and bold ‘Build A Life’ posters and ‘Later Means Never’ film, that slick Formula E spot, the Lad Bible and Wagamama work, not to mention picking up British Airways…you’ve got to bow down to Nils.

For me the highlight of their year, though, was the H&M ‘One/Second/Suit’ project where young individuals were given the chance to hire a suit for free to go to an interview, to give them confidence and help them reach their potential. Mark Romanek made the idea look sharp too.

Romanek was flavour of the month so long ago, he must be as surprised as anyone he was back in fashion. But perhaps there must be something in the air. Because also on the comeback trail, was Tarsem who also made a return to glory with his Toyota spot about Paralympian Jessica Long. It had that touch of cinematic originality that we’ve been missing.

That it outshone the Channel4 spot this time around was no mean feat. While their work had a contender for line of the year – ‘To be a Paralympian, there’s got to be something wrong with you’ – the film that ran up to it didn’t have the clarity or sense of purpose required to have made that point. A hat-trick of black pencils really was too much to expect.

It feels like in the future, originality is set to be the spice that keeps us alive. That extends our lives. And expands our horizons. Oh hang on, I might have accidentally started quoting the trailer for Dune.

But in all honesty, we need people who bring originality to the table more than ever.

Because if all we are doing is ‘borrowing’ references from the exact same Google library searches, then our work is going to continue to keep looking identical. Pop will literally eat itself until it goes pop.

So it’s no surprise that the work which really caught the eye did it because it had set out to create something new for the eye to look at.

Then there was Daniel Wolfe’s film for Lululemon – with words by Oscar Wilde. You could argue there were elements of Andrew Niccol’s Gattaca here, but there was also enough newness and mis-direction to make this feel revolutionary.

It seemed that fashion well and truly favours the brave when it came to direction.

I’m not sure the Megaforce free-floating work was quite up to the snowfall work of last year, but it still took you somewhere new and delightful. With imagination and flair.

In some ways I preferred the behind-the-scenes film more, because seeing the wires made it feel no less powerful and uplifting. And seeing someone strapped to a rig flying across a corn field while a giant drone caused wind effects shot on a phone was oddly poetic.

And then there was the left-field.

Although it might be very very late 2020, there was something thrillingly effortless and self-confident about the Harmony Korine spot for Gucci. (Yes, another comebacker.)

Featuring none other than the master of re-invention, Iggy Pop as well as Tyler the Creator and A$AP Rocky, its nonsensical supernature was matched only by its bravura of using that Cerrone track made re-famous in the opening dance number from Gaspar Noé’s Climax.

This was something that goes beyond convention. And I think it may well be where advertising is heading. Newsworthy, attention-grabbing communication art. Delivered by headline-grabbing creative talent.

Clients know this more than anyone. And it’s probably why most of the most notorious people in our business these days are directors not creative directors.

And for those people who say, ‘where’s the idea?’, I say stop holding the world back wanting taglines or voice-overs to explain everything.

Open yourself up to realising that people connect with things that move them. Rather than being told how to feel or being told things they already know.

In Australia and New Zealand, Special Group seemed to be chancing their arms with work which ‘does’ instead of ‘says’, and seem to be riding the Covid waves better than most as a result.

Thinking about it, that Gucci spot could well have been an Uber Eats ad, if someone with a brown paper bag had arrived mid-way with a doorbell. God knows what the delivery would have been though.

As it happened, Special got all kinds of weird celeb pairings together for a bite in 2021 – and their client goes from strength to strength as a result. This is global brand-building work which has plenty more life left in it.

Making Simon Cowell a grey Wiggle has to classify as some sort of coup. So too getting Elton John to ride a rocking rocket. But their highlight for me this year goes to Leslie Jones telling herself – and us: ‘Everybody was a mess’ in the March Madness spot.

Hats off too to CHEP and Sanjay de Silva. They created something so unexpectedly fresh with FlyBuys that a lot of ad folk lost their shit on the blog.

Flybuys ‘Give A FlyBuys’

What people were noticing is that if you put some real effort in, then surprise surprise the audience gets to enjoy advertising, as opposed to wishing it would piss off.

The Monkeys in Sydney wrote a beautifully acted (Miah Madden) and directed (Madeline Kelly) spot for UN Women Australia, posing the timely question ‘When will she be right?’. It was a great piece of engaging storytelling that had a beginning, middle and an end.

UN Women Australia: ‘When will she be right?’

And down in Melbourne, their Goat, Goat and Goat Lawyers campaign for Goat Beer was about as original a way to do a promotional giveaway as you could imagine.

And included a serious challenger for line of the year – ‘I thought you just drank wine…but you put it in cooking’.

In a year which none of us will forget, it’s funny how little of the work was memorable.

But maybe there were some things worthy of recognition from the year after all.

One project which will most definitely make its mark on the awards circuit is a project that demonstrates how advertising with a purpose can be so much more than a tokenistic or self-interested exercise.

In 2006, football prodigy Kiyan Prince – at the age of 15 – was stabbed to death while protecting his friend from a knife attack. One of the most promising talents in the Queens Park Rangers soccer academy, Kiyan’s life ended way before he could fulfil his potential.

To mark what would have been his 30th birthday, and as a fundraising tribute, Kiyan was finally signed up to his former club as a playable character on EA Sports’ FIFA 21.

The work was created by Engine for the Kiyan Prince Foundation. And it is both smart, emotive and effective.

It’s sad to say, we’ve lost more than few wonderful creative spirits this year – not least Virgil Ablot and Ringan Ledwidge, both of whom died from cancer way too young.

Ringan was a truly innovative and creative storyteller – whose passion for making advertising something worthwhile and valuable was evident in all that he did.

His work for The Guardian, Levi’s or Sainsbury’s will be a great legacy – not forgetting the Audi ‘Clown’ spot.

It lives up to this quote of his.

“I still believe that stories well told rise above the mediocrity and, in turn, provoke, inspire and financially deliver. And there are just about enough agencies, creatives, directors and clients to keep that alive. This kind of work is still the work that makes the difference. Hopefully, that penny will drop for those who employ agencies and production companies alike.” Campaign Magazine, 2015.

It’s not lost on anyone that the soundtrack on the Audi spot was from another creative maestro we’ve lost this year, Stephen Sondheim. And it’s in his words we can perhaps find the answer to my original question.

What was the highlight of 2021? Well, maybe next year.