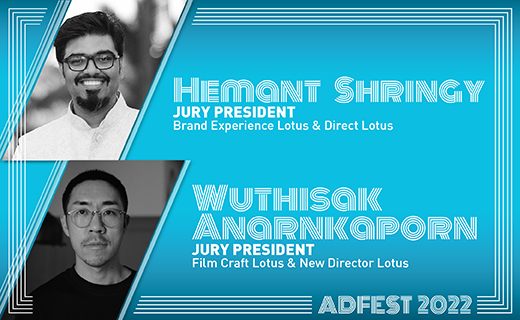 Hemant Shringy, Chief Creative Officer of BBDO India in Mumbai, joined the agency in 2012. His works have been awarded for their creativity and effectiveness, but are also known for influencing positive social change. Shringy has over 200 awards under his belt, including several Grand Prix. His “Share the Load” for Ariel was ranked world’s #1 for two years in a row by WARC. He was named South Asia Person of the Year, by Campaign Asia in 2017 and 2021, and was ranked #13 most awarded ECD in the world by the Big One Report in 2017.

“It’s a privilege to be Jury President at ADFEST 2022. It’s always thrilling to see the works that reflect what makes our diverse region so unique. The pandemic has affected the ways we live and interact, so I really look forward to seeing how brands have pivoted to come up with not just creative ideas but creative solutions in the Brand Experience & Direct categories to reach consumers amid these challenges. The work done in this period could redefine the category”, says Shringy.

Wuthisak Anarnkaporn, Film Director and Founder of Factory01 in Bangkok, made his directorial debut in 2011 and has since accumulated various awards. “Un”, as Anarnkaporn is more commonly known, is an innovative director known for his comedic genius and impeccable direction. In 2020, he was ranked #3 in Campaign Brief’s Global Directors. His work, “Shop Unfriend,” for Central Midnight Sale was the Grande winner of Film Lotus at ADFEST 2021.

“I’m feel privileged to be invited as Jury President for ADFEST, a homegrown festival that has put Asian creativity in the spotlight. The craft categories are so diverse and it’s always exciting to see the inventive ideas that people come up with for new creative solutions,” says Anarnkaporn.

“We are delighted to have Hemant and Un join our respected panel of Jury Presidents. We have no doubt they will bring their unparalleled expertise to the table and unearth the most deserving Lotus Award winners in their categories,” says Vinit Suraphongchai, Chairman of ADFEST.

ADFEST is one of only eight regional festivals included in the WARC Rankings, successor to The Gunn Report.