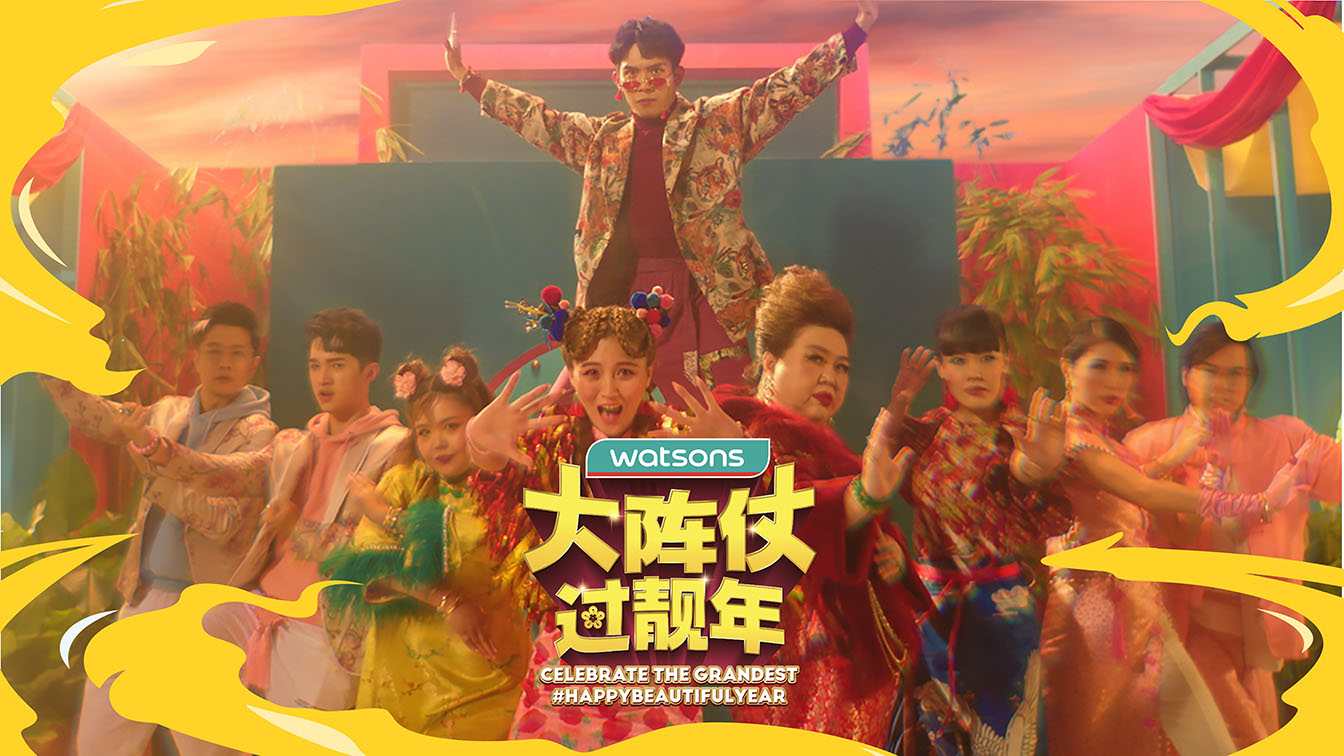 The celebration of Chinese New Year has not been the same for everyone since the pandemic hit in 2020. This 2022, Malaysians are hoping with a sense of renewed optimism, that the Year of the Tiger will be a year to make up for lost time and opportunities. Naga DDB Tribal Malaysia and Watsons Malaysia have collaborated to release a festive piece based on the common sentiment of wanting to amplify the celebration this year – by welcoming the new year with a sense of revitalised hope and energy, making it a grand and epic celebration.

Seeing that most people have been unable to ring in the new year as we once did for the past two years, many are now eager to kick off 2022 with the best possible Chinese New Year festivities.

Caryn Loh, Managing Director of Watsons Malaysia, said: “After almost two years of battling the pandemic, Watsons, as the No.1 health and beauty retailer in the country, returns with the grandest celebration for Chinese New Year. Through this, we hope to inspire everyone that the grandest celebration comes from our hearts, and it’s with whom we celebrate that makes the celebration grandest. Together, we can embrace each other’s strengths and overcome any challenges to make this year’s celebration a grand one.”

“The star-studded cast, Watsons’ signature CNY melody, high production value and the entertaining plot have made Watsons Malaysia’s CNY film the most anticipated CNY content over the years. For many viewers, content from Watsons during CNY is synonymous with the arrival of Chinese New Year and as such, we are mindful that our CNY film has a social duty in spreading good values and positive messages amongst Malaysians.” said Raphael Ang, Head of Chinese Copy, Naga DDB Tribal.

“That influence has developed, grown and taken on a life of its own, as we observe viewers revisiting and re-watching content Naga has produced since 2019. While the themes from previous years have largely revolved around family togetherness, we have decided to focus on the overwhelming anticipation for a grand celebration in 2022 as we usher in the Year of Tiger. We recognize that to accomplish this, it starts with us putting in that extra effort.”

“Titled “大阵仗过靓年”, which translates to “Celebrate The Grandest #HappyBeautifulYear”, the short film is inspired by the Mandarin word, ‘功夫’ (gong fu), which could either mean ‘kung fu’ or ‘effort’. This gave us the freedom and idea to play with the word’s double meaning, which also became the premise for our main message to Malaysians, keeping them entertained and engaged in a martial arts comedy that communicates the messaging – a wonderful #HappyBeautifulYear awaits as long as we put in the effort. The kung fu element also adds a fresh take to Watsons Malaysia’s series of CNY films, while retaining its musical drama approach.”

Extra efforts have also been put into this year’s production. Above and beyond the talented cast members, every single detail of the production is handled by top-notch production talents such as film director, Dick Chua from D Moving Pictures; professional martial arts coach, Mr Tan Heng Seng from Twins Tiger Wushu Club; song composer, Ang Chee Ciang from Yolo Onwards Production; including the outstanding art department and stylists behind the scenes.

“In this year’s brand film, you can catch the cast striking the grandest poses with fierce, playful martial arts flair such as Iron Palm, Tiger Roar, Tai Chi, Wing Chun and more. Together, we are bringing forth an important message of togetherness by embracing each other’s strength,” said Danny Hoh, Customer Director, Watsons Malaysia.

“Watsons Malaysia has been an outstanding business partner for the agency since 2019. We appreciate a client partner who values the agency’s creative input and is willing to take bold steps together with the agency. We believe that driving real-world business results requires us to create experiences that resonate with the audience through the conversion funnel. The film is a good starting point to generate interest and buzz for the brand but it’s not the only thing that mattered to us,” says, Clarence Koh, COO of Naga DDB Tribal.

Aside from the main film, Watsons Malaysia also produced a series of short video assets for the various digital platforms to highlight the wonderful deals that are available in-store and online. Watsons members stand a chance to win prizes worth over RM2.8 million when they purchase any Watsons products during the promotional period. Terms and conditions apply.

Watsons Malaysia’s CNY campaign is further amped up with special appearances from an all-star cast which includes Han Xiiao Aii, Phei Yong, Amber Chia, Jinnyboy, Julie, Meeki, Mei Fen, Smashpop, and Wilbur. Each brings in their followers and supporters to watch the performance of their favourite influencers.