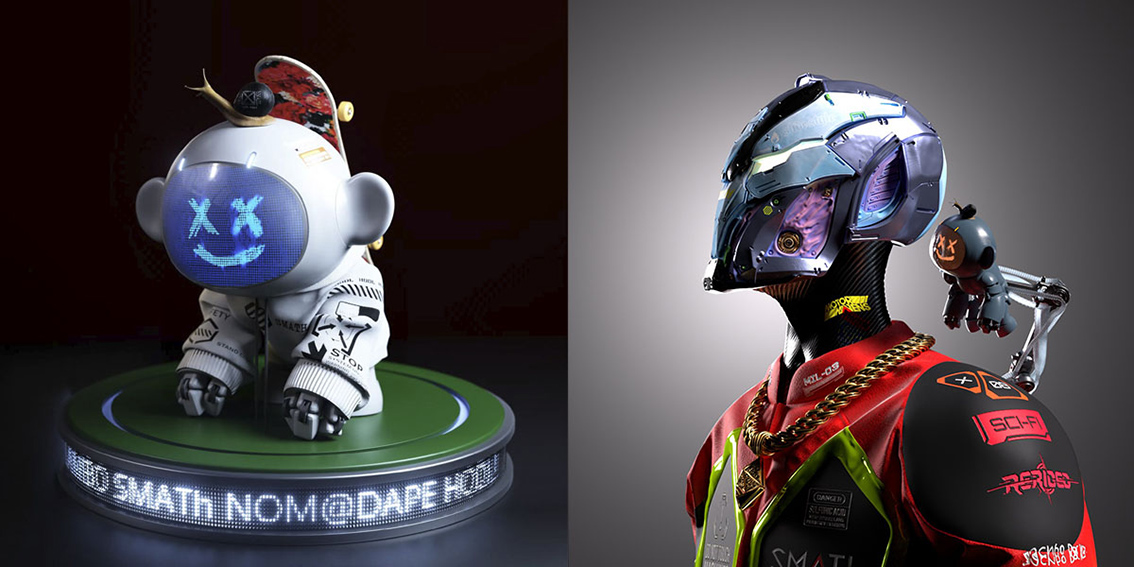 Formed in 2020, SMATh is consisted of five artists working on 3D design, stage art, fine art, and illustration in South Korea, U.S., and Germany. On the sidelines of SMATh projects, the team has been recognized for their design capabilities with works for various brands and organizations including Samsung, Chanel, Seoul City, and Incheon International Airport. As team SMATh, the artists have been presenting distinctive artworks that combine fine arts with 3D technology.

SMATh’s NFT artworks are characters that appear in the universe created by the team itself, ‘SMAThWorld.’ SMAThWorld is set in intelligence information technology era based on innovations in A.I., network, and data. Four species exist in the SMAThWorld; ‘Nom@dapes’ who help travelling through the gate of time and space, the hyper-intelligent A.I. ‘PRD_X’, ‘Blair’ who is a human born with the ability to travel freely between time and space, and a transcended being in different forms ‘i.O’. SMATh’s compelling universe and high-quality artworks have been winning fans.

For example, 1,500 ‘nom@dape’ artworks sold out after SMATh minted out in April via NFT marketplace Klip Drops. The highest price recorded by ‘SMATh Genesis’ collection, traded through the world’s largest NFT marketplace OpenSea, reached 8.4 ETH (about 23,537 USD at the time). On June 17th, SMATh plans to presell new NFT project ‘PRD_X’ and mint out NFT of characters ‘Blair’ and ‘i.O’ by the end of the year.

Through this business agreement, Cheil Worldwide and SMATh will collaborate on:
• Joint planning and development of NFT based IP business
• Marketing cooperation between SMATh and Cheil Worldwide’s clients
• Promoting IP business utilizing universe and characters developed by SMATh.

For example, Cheil Worldwide can create and sell art toys or apparels globally using SMATh’s various NFT IP including nom@dape, SMATh Genesis, and PRD_X, or appoint NFT IP as a model for ad campaigns of Cheil Worldwide’s clients. Even Cheil Worldwide or its clients can participate in SMATh’s new NFT projects.

“We look forward to expanding our business opportunity in NFT through our partnership with SMATh who has the capability to self-develop characters and universe by fusing art and technology,” said Cheil Worldwide representative. “Under our digital vision of ‘Meta-formation’, Cheil Worldwide will continue to collaborate with various partners in tech sector that includes NFT and metaverse.”