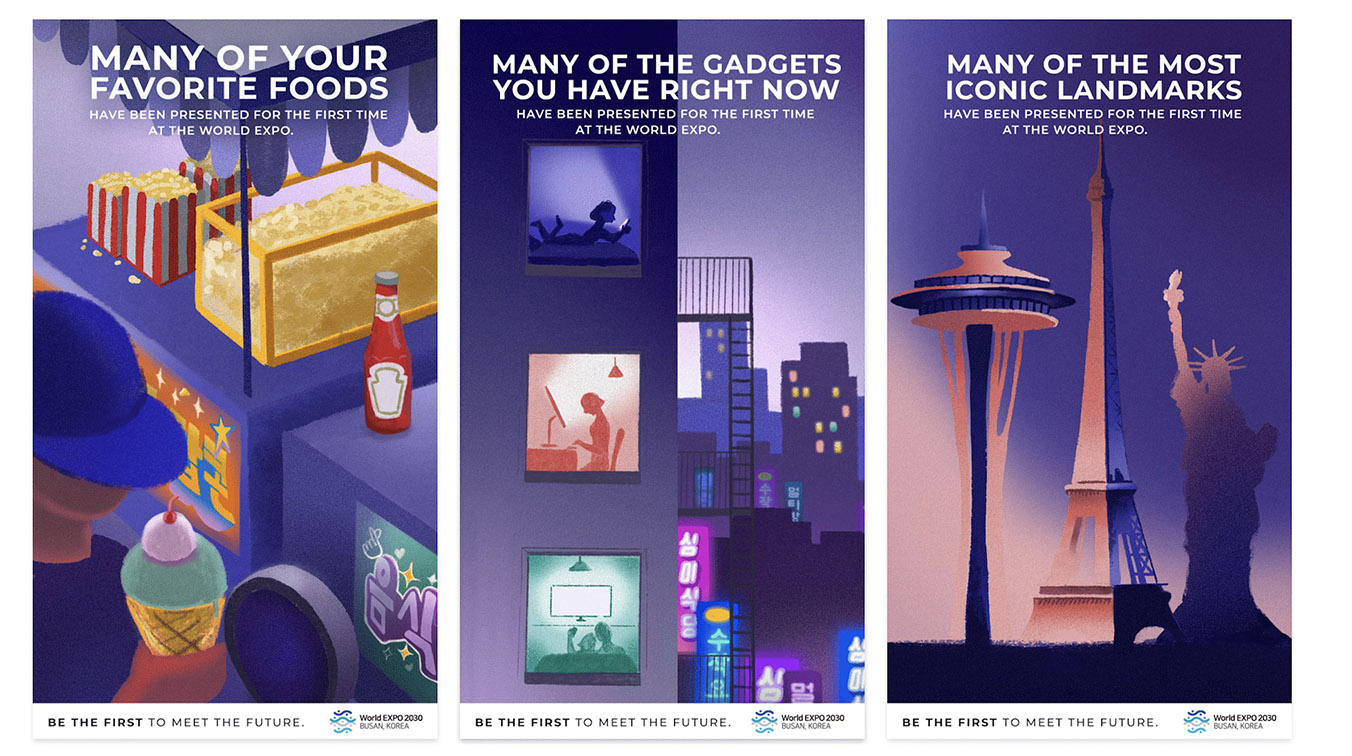 MAD STARS 2022 announced the NEW STARS & YOUNG STARS OF 2022. New Stars is a career development program for junior creative professionals with less than 5 years of experience in advertising, marketing and PR. Competitors were invited to submit a suggestion of ad campaign ideas to attract successful 2030 Busan World Exposition.

Ana Sofia Valdez Blanco and Fátima Alejandra Quiroz Alderete from VMLY&R Mexico have won the MAD STARS 2022 New Stars AD competition with the Be the First to Meet the Future creative work. They win KRW 5,000,000 (approx. US$4,000).

Reflecting on his role as jury for New Stars, Alfred Wee, Executive Creative Director at the McCann Worldgroup Singapore stated that “There were so many amazing entries in this year’s NEW STARS competition. And the winning work reflects the same spirit in welcoming global citizens to Busan for The World Expo 2030 as the true inspiration to set South Korea on the world stage”.

The Gold winner, Ana Sofia Valdez Blanco, Fátima Alejandra Quiroz Alderete, said: “This award means a lot to us since it has been a dream we have had and have worked on. We want to thank the jury for selecting our idea, and the festival for supporting young talent from all over the world. We also are honored to represent Mexico’s young talent on the other side of the world, as it helps to break barriers and push forward ideas to make a more diverse industry. We dedicate this award to Latin-American women in the creative industry.”

While the Young Stars program is designed to give university students a taste of what it is like to work in the creative industries. Competitors were asked to suggest campaign ideas to help support Busan’s bid to host the World Expo 2030.

Young Star was swept away by Korean university students. Young Stars Gold winner receives a prize money of 5,000,000 won (about US$4,000), like New Stars. They are also offered the opportunity of internships in global advertising agencies.

Barbara Dirscherl, Creative Director at GGH MullenLowe and Young Stars AD competition judge, said: “I did not expect to see such different levels of professionalism. In general, being able to peek into students’ minds is quite inspiring, as ideas often don’t come as polished as in the pro awards, but instead are raw and unheard of. In detail, I was really blown away with some ideas – for me they can surely keep up with the business out there and should be executed right away. Two ideas that I really can’t forget, they were funny, witty, and smart: the “fishcake saga” and “follow the girl”. Chapeau!”.

Freddy Montero Galva, Creative Director at MullenLowe Interamerica, said: “The judging process was an interesting experience and I enjoyed being part of it. A nice percentage of the projects submitted had something in their favor, they came from strong insights and therefore found good creative solutions that were backed by data. Although there can only be one winner, they all won for me. They won the courage of submitting their ideas, they won because they get to learn due to the feedback they received from the judges, and they won just for being out there trying to learn. It is amazing being able to be part of the growth of the new generations.”

“We would like to thank everyone who took part in this year’s New Stars and Young Stars AD Competition, along with our panel of industry professionals who chose this year’s winners. The quality and complexity of work submitted suggests the future of our industry is in very safe hands,” says Hwanjin Choi, Chairperson of MAD STARS.