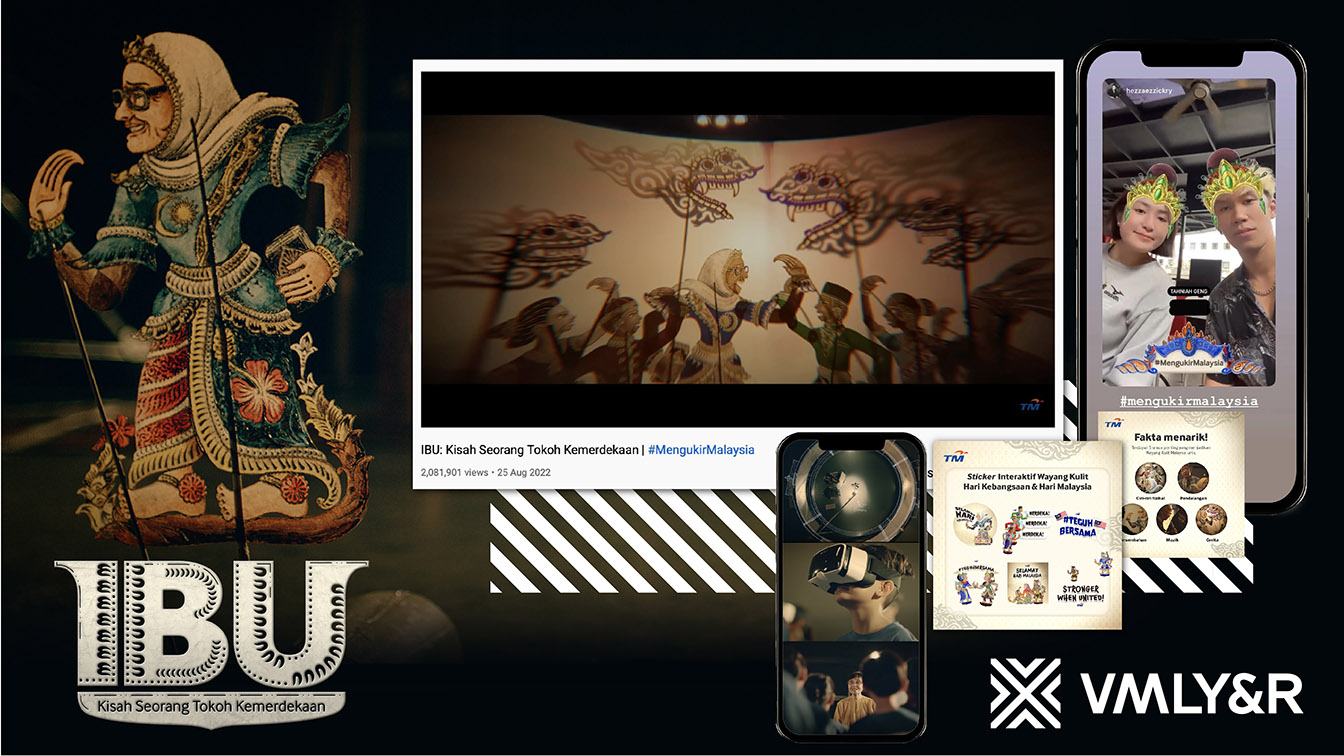 Malaysian telecommunications company, Telekom Malaysia Berhad (TM) and VMLY&R are reviving an ancient art form to shine a light on one of Malaysia’s unsung heroes, as part of an innovative new Merdeka campaign which launched on 24th August 2022.

Part of TM’s #MengukirMalaysia (Crafting Malaysia) initiative to celebrate, elevate and preserve Malaysian culture through technology, the new campaign, saw the fading Malaysian artform ‘Wayang Kulit’ or ‘shadow play’, brought into the digital age through an innovative 360° film, to tell the story of one of the country’s lesser-known Independence hero, Ibu Zain.

The film tells the story of the forgotten Malaysian heroine who encouraged Malaysians to unite and empowered Malaysian women to fight for their right to an education. Wayang Kulit is often thought of as the earliest form of animation. Partnering with Tintoy Chuo, the Founder of Fusion Wayang Kulit, and his Tok Dalang (master puppeteer), VMLY&R sought to take the artform to the next level using 360° video technology to create a truly immersive 360 Wayang Kulit experience for modern audiences.

As part of the campaign, VMLY&R also created a specially curated TM Merdeka microsite, where audiences can immerse themselves in the world of Wayang Kulit, Ibu Zain and TM‘s Mengukir Malaysia initiative with videos, 360° interactive Wayang Kulit experiences and special behind-the-scenes content. Fans can also feel part of the campaign by adopting one of several Wayang Kulit Instagram filters.

Since its launch, the collective brand films have already received more than 2m views online.

Kenni Loh, CEO, VMLY&R COMMERCE Malaysia, said: “At VMLY&R we believe in harnessing creativity, technology, and culture to create truly connected brands that resonate with consumers in real and authentic ways. TM is a progressive Malaysian brand with technological innovation at its core. With this in mind, we were keen to work with them to design and deliver a campaign that would reflect their national pride, whilst underlining their positioning as an enabler of technology, in a way that would resonate with Malaysians everywhere. Aligning with the Malaysian Government’s ‘#Keluarga Malaysia, Teguh Bersama’ (Malaysian Family, United Together) theme, this campaign couldn’t be any more uniquely Malaysian, reviving a forgotten art form via the use of innovative technology to capture the imagination of the nation and tell the story of one of the country’s most inspiring heroines this Merdeka.”

Shanti Jusnita Johari, Chief Marketing Officer, TM, said: “Through our Mengukir Malaysia initiative, we aspire to leverage technologies that not only change the way we live, work and play, but also enhance our perspectives and ideas, drawing from our local culture and history to remind us about what’s made us a great nation.

“This Hari Kebangsaan and Hari Malaysia, we wanted to remember and celebrate Malaysia’s many unsung heroes, such as Ibu Zain, who made our country great. We hope that through this short film, people will be encouraged to learn more about this historical icon as we commemorate her legacy via Wayang Kulit, one of the first forms of storytelling by our ancestors which we must also preserve.”