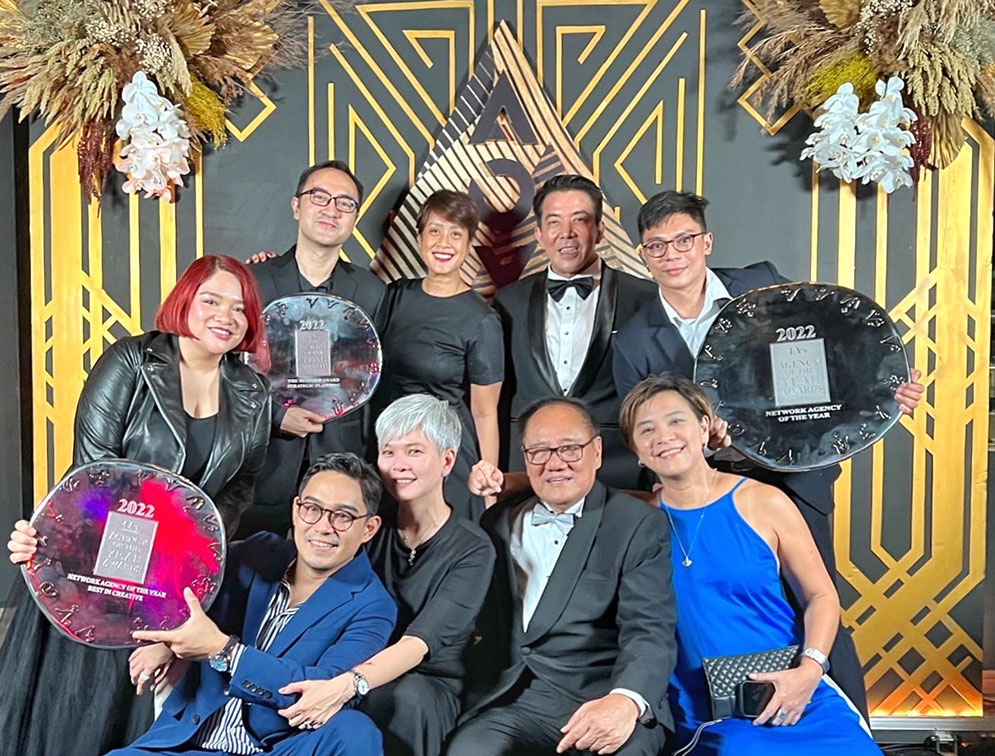 TBWA\Santiago Mangada Puno obliterated its own record at “The Award That Matters” when it was named Philippines Agency of the Year for the 10th time. Officiated by the Association of Accredited Advertising Agencies of the Philippines at The Penthouse 8747, this year’s ceremony was the 24th in the organization’s 25-year history, and the first in-person event since 2019 (postponed in 2020, the 2021 edition was held virtually).

“It’s wonderful that we are able to actually see everyone and celebrate the work as a community again,” said TBWA\SMP Chief Creative Officer Melvin Mangada, who attended the ceremony with Agency Co-Founder Jimmy Santiago and Managing Director Portia Catuira. “The fact that we’re celebrating our own win is the icing on the cake.”

The sentiment was seconded by Catuira, who added: “We are grateful for the recognition, but it hasn’t entirely sunk in yet – I’m still in shock!”

Before TBWA’s history-making legacy wins of Best in Creative and Network Agency of the Year were announced, the Agency achieved another milestone when RJ Paculan won the first-ever NextGen Award for Strategy Planning. Known for his holistic approach to the strategic and creative ideation processes, Paculan was on hand to accept the award, which was conceived to recognize the exemplary work of tomorrow’s ad industry leaders.

“This isn’t something I expected,” said Paculan, whose work played a key role in some of the Agency’s most significant campaigns, before sharing his gratitude for the honor. “I’m thankful to be working alongside such an amazing bunch of people whose talent, support and passion helped to win this award.”

Since launching in the Philippines back in 2001, TBWA\SMP has proven itself among the best in the region, with work for clients such as Ayala Corp., McDonald’s, Spotify, Champion, and Nissan combining raw data, meaningful insights, and topflight creative executions to produce consistently effective, award-worthy work.

According to Mangada, the win represented the collective effort of people from different disciplines coming together, especially in trying times, as, “The reputation we built [together] gave us the credibility and strength to grow during the past three difficult years, keeping jobs and livelihood, and not having to lose one single team member.”

When asked about his Agency’s formula for success, Mangada shared that there was no substitute for hard work, but even that wasn’t a guarantee: “At TBWA, we approach each client and project one at a time, and let the work speak for itself. Thankfully, yet again, the industry was listening, and we are grateful.”