Drinking while grieving: Filipinos turn to alcohol to remember departed loved ones during ‘Undas’ – Study 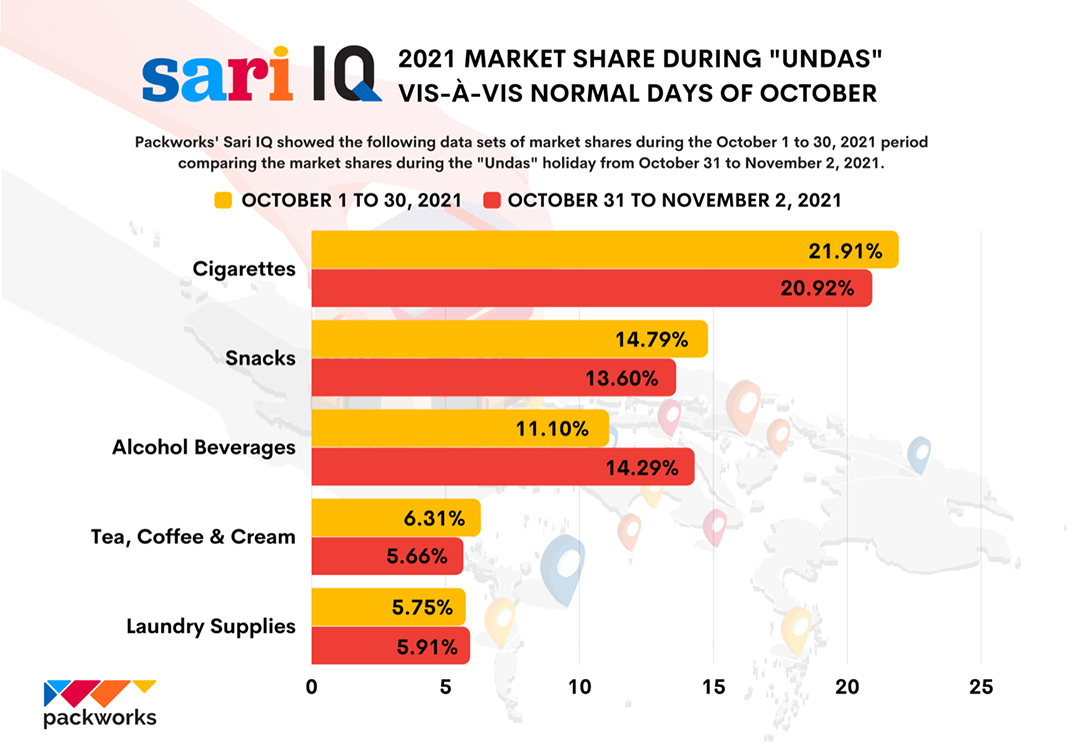 Many people worldwide turn to alcohol when coping with grief, usually from watching a loved one pass on, breaking up with a partner, or dealing with a personal or financial loss. However, on some occasions, alcohol is widely considered as something that makes people feel good and elevates their mood. Filipinos have found a way to incorporate both into the holiday that commemorates their departed loved ones.

“This is expected as Filipinos consider ‘Undas’ as a time to remember loved ones in a social context, meaning a lot of gatherings that revolve the consumption of alcoholic beverages is common,” says Packworks Chief Data Officer, Andres Montiel.

Montiel said: “The decrease may be because, in a period of solemnity in the presence of the dead, we stay away from products that may have caused the death of our loved ones. A poignant reminder that life is short and people want to enjoy it longer.”

On the other hand, sales of Tea, Coffee, and Creamers decreased by 0.65% during the same period.

“This might be due to people sleeping late nights in the cemetery, drinking alcohol, and not waking up early to have their morning coffee or tea,” Montiel added.

Even with the increasing market share for alcohol, Sari IQ finds that daily sales during “Undas” were typically lower than in the whole month of October, where total sales daily decreased by 19.78%.

Montiel said: “this might be due to people leaving their houses to visit graves; thus, some local sari-sari stores might be closed during this time to celebrate the long holiday at their home province or in the cemetery.”

These “sin” products have been heavily taxed by the government as part of its Universal Health Care Program, as the duties from these products may be a potential revenue source that will help the program.

According to the Sin Tax Bill, higher taxes and consequently higher costs will discourage the consumption of Filipinos from these “sin” products, especially cigarettes that cause lung cancer, which is the leading form of cancer in the country.

However, based on the data presented, Filipinos continue patronizing the use of “sin” products by buying from these sari-sari stores even though prices have increased due to the higher tax imposed.