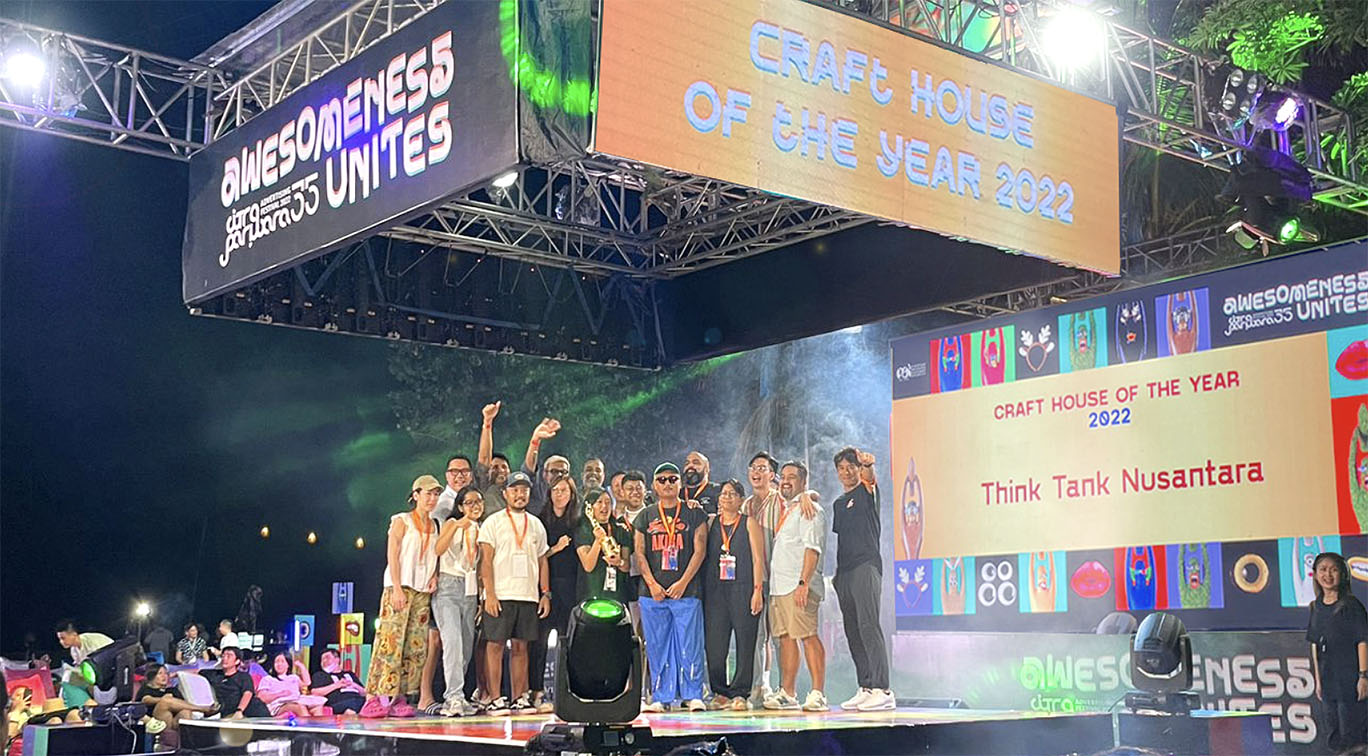 Think Tank Nusantara wins Craft Production House of the year with a slew of award wins at The 35th Citra Pariwara Advertising Festival that was held in Sofitel Bali Nusa Dua Beach Resort, Bali on the 14th-16th of December 2022.

Indonesia’s Citra Pariwara is fast becoming one of the region’s prestigious events that recognises the best and brightest in the Indonesian Advertising industry. With 5 judging panels covering Creative, Media, Digital, Film Craft, Audio Craft, Visual Craft, and the ‘Daun Muda’ category to support and promote new rising talent, and acclaimed Jury members from around region and beyond – including New York, Japan, Middle-East, Manila, Bangkok, Kuala Lumpur, and Singapore – the 35th Citra Pariwara is a testament to the growth and resiliency of the Indonesian Advertising industry.

Set against sun-swept beaches (and the occasional scattered shower), Citra Pariwara 2022 was held for the first time outside of Jakarta. A wonderfully put-together event held over three days, with seminars, talks, mentorships, and two nights of awards – with 2102 entries in total – this was Citra Pariwara’s most significant event yet, with a 20%+ increase from last year’s entries. The Festival served as an excellent way for Indonesia’s creatives and ad-industry luminaries to reconnect personally after a two-year hiatus due to pandemic restrictions.

Reza Fitriano, President of Citra Pariwara, said: “This was a hotly contested awards festival, and we are delighted with all the entries and participants. This kind of competition can only push the Indonesian advertising industry further, and we are proud of honouring all the work done in the last year. It was really wonderful seeing friends and peers alike enjoying themselves and taking the time to recognise the work coming out of Indonesia.”

“With many Production House entries this year, my hope for the following year is to involve the Production Houses at an even greater level of participation, so that Citra Pariwara can truly be the Indonesian platform to nurture young talent, – whether they are ad agency or Production Houses talent alike – and really show off the best creative work that Indonesia has to offer.”

Under these exceptional circumstances, Think Tank Nusantara was named Craft Production House of the Year.

The team at Think Tank Nusantara has worked tirelessly to create innovative and effective campaigns for their clients, and their hard work paid off when they were announced winners.

“We are thrilled to have won this award and be recognised by our peers in the industry,” said Intan Sham, General Manager and Executive Producer of Think Tank Nusantara. The new moniker is a recent rebranding of Think Tank Indonesia.

“We have a new young talented team, and this award is a testament to their dedication and passion for their craft. We are honoured to be a part of this amazing industry and look forward to continuing to push the boundaries of production creativity and innovation in the years to come and contribute to the already high standards that Indonesia produces,” she continued.

The rebrand comes with a renewed commitment to providing the best value to clients and agencies but always with an Indonesian- first mentality. The 11 awards under the Film Craft and Film Category brought home will motivate and inspire the team further.

“Just like Citra Pariwara’s tagline this year, hopefully, we can contribute more ‘Awesomeness’ to the industry in the future!” Intan added.

Rajay Singh, founder, film director and Regional CEO of the Directors Think Tank group of companies – who also served as Craft Jury President – said: “I have always been a big fan of Indonesian work. I think the level of creativity and artistry in Indonesia is already very high, but every year, it gets even better and better. To have our work included among the award-winners is a tremendous honour. I hope this win will help elevate and motivate the standard of Craft for next year.