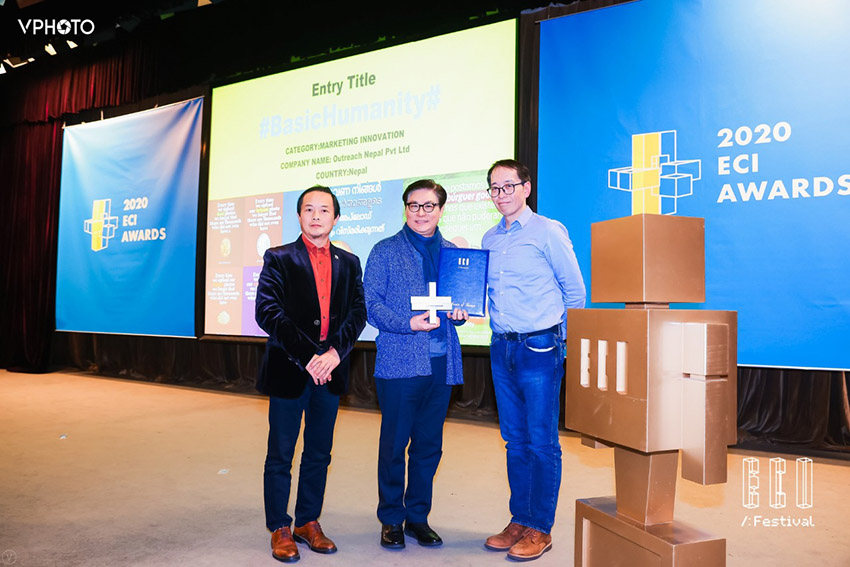 Outreach Nepal has won an ECI Marketing Innovation Award for their “Basic Humanity” campaign, which was initiated in the beginning of March this year when the entire world was locked inside houses with limited resources.

ECI festival was held in Shanghai on 16th to 18th December. ECI Awards was founded by IECIA (International Entrepreneurs, Creatives & Innovators Association). ECI presents the global award in the arena of digital economy, which measures “effectiveness of Innovation” as the evaluation criteria. It recognizes the most innovative achievements in the categories of business model, product, service, technology, marketing and management to encourage and inspire innovations applied in commercial and creative industries around the world.

Raymond So, Chairman, Asian Federation of Advertising Associations (AFAA), who accepted the award on behalf of Outreach Nepal said: “I would like to congratulation Ujaya and his team for the inspiring campaign of Basic Humanity, which was adopted, replicated in multiple languages in several countries with a very positive note. The campaign was very relevant to current context. Basic Humanity campaign has brought forward the simple message of “empathy”.”

Dr. Owen Jia, President, ECI Awards, said: “Many Congratulation to Outreach Nepal team for winning ECI Marketing Innovation Award for the project “Basic Humanity”. This work focuses on the problems that’s common to humans across culture and borders, it is emotional and very insightful.”

President of Advertising Association of Nepal, Rabindra Kumar Rijal, said: ‘this is a great honor and a notable accomplishment for Nepalese advertising to be recognized in an international scene. It gives me immense pleasure and confidence that the future of our advertising industry is moving towards an optimistic track. I congratulate the Team Outreach for incessantly bringing us such accolades and recognitions from the global platform and making both, our fraternity and our country proud.’

Ujaya Shakya, Founder Managing Director of Outreach Nepal, said: “As social beings, thanks to social media, that kept us sane amidst all the uncertainties and lockdown, we all were sharing our family-time, cooking, or social media challenges ranging from the book one has read to the movies we watched. During the same time, we also noticed that there was a very popular trend of displaying food preparations on social media. Usually, they were nice lavish and appetizing cuisine from around the world. But in our mind a question hovered, was this the right time to exhibit such luxuries! Let us be more empathetic, more human towards the less privileged. My team at Outreach took a small initiative using social media where we reminder people to stop displaying the lavish food images, just as a reminder of the “Basic Humanity” which is an integrated part of all of us.”

For the first time most probably, “Basic Humanity” campaign started in Nepal and was adapted by 6 countries and in 8 different languages, the campaign was noticed by major global advertising publications, they came forward and covered the campaign insights in their publications.

Shakya added: “As I have mentioned earlier that our small gesture was to bring forward the simple message of ‘empathy’. If this effort can touch a single soul, we will be an effective humane creative agency and that’s the power we need in order to reinvent ourselves as the new age advertising professionals.”