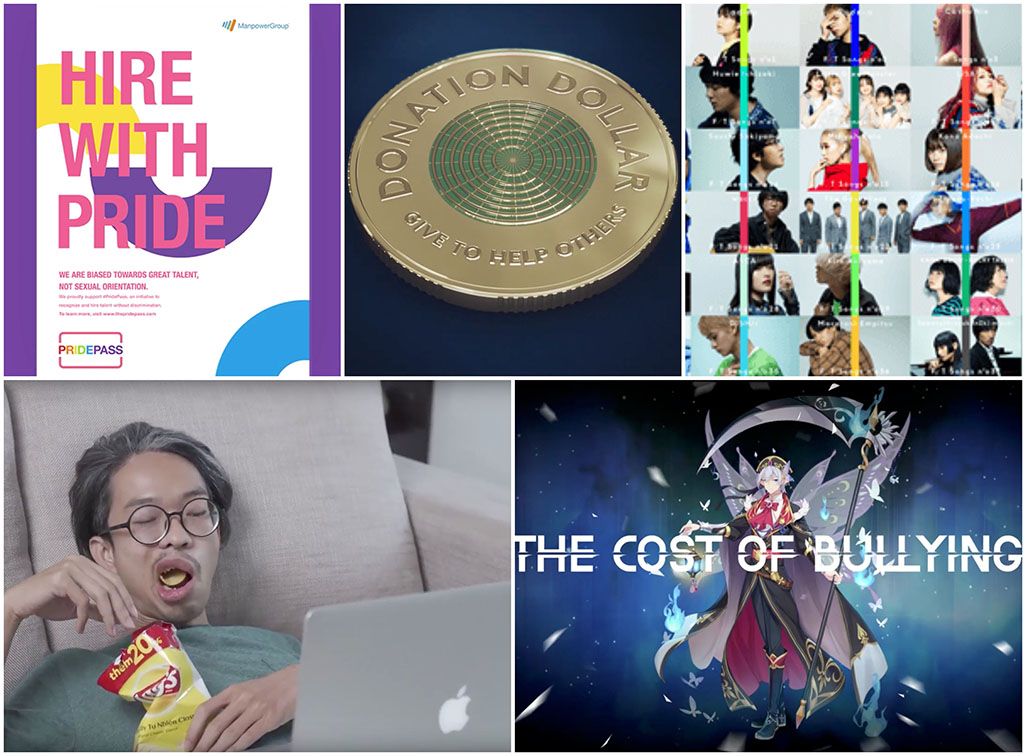 Ali Rez, Regional Executive Creative Director at Impact BBDO MENAP, was an Executive Judge at the AD STARS 2021 Awards. He says: “AD STARS is always a wonderful show to view work from a large number of cultures, and is always an incredible learning experience. This year was no different: the jury were absolutely amazed by the variety of thinking.”

There were 7 Gold trophies awarded in Film, but no Grand Prix.

“A personal favorite of mine is Pooja Didi by Taproot Dentsu India. Within a minute, I was fully invested in the story. And I didn’t want it to end. I actually teared-up a little. Great direction. Great storytelling. Films like this aren’t always destined for big awards, they’re almost too quiet and genuine for that. But I’m very glad we could give this one a Gold,” explains John Mescall, global executive creative director and Global Creative Council president at McCann Worldgroup, who led these categories.

In the Video Stars category, the Grand Prix is awarded to TBWA Hakuhodo Tokyo for ‘The First Take’ for The First Take.

“The First Take was designed to create an entirely new way for artists to record and share their music. It wasn’t just a one-off piece: it was designed to scale and did just that. It was beautifully executed, and supremely fit for purpose. In short, an ambitious idea executed flawlessly, that sets a very high bar for video content. I think for a few years, whenever I’m interrogating a branded content piece, I’ll be using The First Take as a benchmark. Wonderful, wonderful work,” says Mescall.

Jin Yang, executive creative director at Leo Burnett Taiwan, also judged these categories. She adds: “I love this campaign, I think it precisely captures the beauty of singing and music: to touch people, and I believe by bringing back the reason people love music, they found the best solution in the difficult time of the pandemic.”

There are 3 Gold winners in Video Stars:
– GIGIL, Philippines: ‘Netflix ‘Cupids’’ for Netflix
– Ogilvy Group Thailand: ‘Library’ for Monde Nissin Co., Ltd.
– Wunderman Thompson Thailand: ‘This creative is thanking a client for cancelling its work in the pandemic’ for TCP Group.

Says Yang: “I was impressed by TCP Group’s campaign, which finds a smart way to show they care. Instead of directly showing TCP’s support for COVID-19, the video started with the frustration of cancelled projects, which viewers can easily resonate with.”

In Design, the Grand Prix was awarded to Saatchi & Saatchi Australia for ‘Donation Dollar’ for Royal Australian Mint.

In Print, the Grand Prix was awarded to Dentsu Inc.’s ‘The Toxic Dictionary’ for Nikkei Inc. The jury also awarded one Gold trophy to Havas Middle East for ‘LEGO News Rebuilt’ for LEGO Saudi Stores.

Says Scardaccione, who led these categories as executive judge: “The Toxic Dictionary is a piece of craft. The colours, typeface and the overall presentation are immaculate. Everyone on the jury loved this and with an almost 100% majority, it took the biggest award. If anyone has a copy they can send me, I would look forward to holding one in my hands.”

Says Adolfo, who also judged these categories: “The Toxic Dictionary addresses a crucial social problem with a wise solution. By collecting the source material online directly from consumers, the work is embedded with an undeniable truth. And by compiling everything in a dictionary format, it not only gives it an intrinsic importance but also allows it to live longer than the usual life span.”

Says Rez, who led these categories as executive judge: “The travel industry got impacted more than almost any other during this pandemic. To pivot amidst such crisis the way THAI Airways did is the stuff of great learning. They understood their customer well, and took pride in what differentiates them: the wonderful food they serve on board. A worthy winner in this category.”

Says Rez: “The strongest thing about both these campaigns is that they go beyond just awareness and talk – they provide real solutions that address the problem and go a long way in helping overcome it.”

There were no Grand Prix or Gold awards in the Diverse Insights category.

There is one Gold winner in the Place Brand category this year: MullenLowe MENA FZLLC’s ‘Double Moon’ for UAE Government Media Office.

In Radio & Audio, Happiness Saigon in Vietnam has won Grand Prix for ‘Lay’s Crispy Subtitles’ for Lay’s; while AKQA Brazil has won Gold for ‘Beck’s Frequency’ for Beck’s.

“Lay’s Crispy Subtitles is an ingenious case of not only utilizing the audio medium very creatively, but doing so with the product differentiator at the very heart of the idea. It’s all done in a very tongue-in-cheek, whimsical manner which is absolutely perfect for the category, while doing a fantastic job of selling the appetizing crunch of the product. Winner all round,” says Rez.

There were no Grand Prix or Gold winners in the Innovation and Integrated categories this year, and no Grand Prix winner in Interactive.

“Overall, Interactive winners should make the audience want to interact with the idea. ‘Beck’s Frequency’ belongs to the “seriously?” category. I’m curious to try it out myself. With ‘Yakushima Treasure’, I actually played with the experience after seeing the case video. I really loved the ‘World’s Oldest E-Sports Team’ idea as so many gamers play war games and revel in aimless killing without understand the chilling truth of wars,” explains Natalie Lam, chief creative officer, Asia Pacific, Middle East and Africa at Publicis Groupe, who led these categories as executive judge.

In Mobile, Deloitte Australia has won Gold for ‘Carbon Thumbprint’ for Belong.

“‘Carbon Thumbprint’ is an alarming use of data: concrete evidence of our impact on the environment. We all know we should limit social media and mobile usage for our mental health, and now there’s another good/important reason to do so. Let’s hope this concept takes on a much bigger impact,” says Lam.

“Yakushima Treasure isn’t a clever but a beautiful use of data. It’s just so weird and wonderful, it showed the tenacious dedication to craft during such a tough time,” says Lam.

Regarding POL Oslo’s campaign, Lam says: “We all need something light-hearted during such a heavy time. It’s amazing to see the Scandinavians keep their signature sense of humor while pulling it off in such a short time. We always preach to our clients the idea of real-time responses, but few actually pull it off in such a well-crafted way.”

“With this idea, people will look at money differently. This coin represents generosity. This coin reminds us that there are less fortunate people out there who need our assistance. This coin is not only the actual help, but a call to action for everyone to help,” says Merlee Jayme, chief creative officer, Asia Pacific at Dentsu International, who led these categories as executive judge.

Says Jayme: “‘Voice of Racism” is a simple way to make people who think they’re anti-racism think again. Imagine listening to these real hurtful words hurled at people every day? Understanding that they may even be unconsciously contributing to this is a powerful realization. It’s good that this is being used as a learning tool in New Zealand today. Definitely something the world should learn from.”

Says Erick Rosa, chief creative officer at Publicis Groupe Japan, who also judged these categories: “Running Stories is an interactive idea that helped such a small country like Singapore exercise and relieve the effects of a massive lockdown during the pandemic. Voice of Racism is an idea that touches on a very delicate subject for a very important cause in New Zealand. And Contract Translator, as a Brazilian myself, I can see how relevant and smart this idea is. To have an idea like this to help people navigate the intricacies and madness of red tape in my home country: it is really, really smart.”

“This campaign was a really smart response to the times we all find ourselves in. It combines a smart digital couponing idea with Burger King’s unique brand personality to provide a smile to people who needed it,” says Jamal Hamidi, managing director, creative and content at DDB Group in Hong Kong.

“‘Shamecards’ is as direct as it can be. A simple and powerful message in a country where this particular kind of message is often times lost in the noise and the problem itself. The craft, the illustrations, the attention to detail and of course the purpose of this idea is what makes it unique in my opinion,” explains Rosa.

In Media, there is one Gold winner: Saatchi & Saatchi Australia’s ‘Donation Dollar’ for Royal Australian Mint.

Says Jayme: “We found ‘Sleeping Flags’ to be very moving. The visual of the Irish flag as a sleeping bag used by homeless veterans is really heart wrenching. It really brings to light the unfortunate situation of these homeless veterans in Ireland, or even veterans all over the world.We love how this campaign has brought necessary donations and help to give these veterans dignity, off the streets.”

Says Hwan-Jin Choi, chairperson of the Ad Stars Executive Committee: “Our panel of judges told us that they were were amazed by the ideas they saw that are helping brands to rise, restart the economy or create meaningful ways to assist consumers. They give us optimism for the future – all winners should be very proud.”

The three-day Ad Stars 2021 Online Festival concludes today on 27 August. Featuring an esteemed line-up of speakers inspired by the theme ‘Shift’, all sessions will now be available to watch on demand for 60 days until late October 2021.