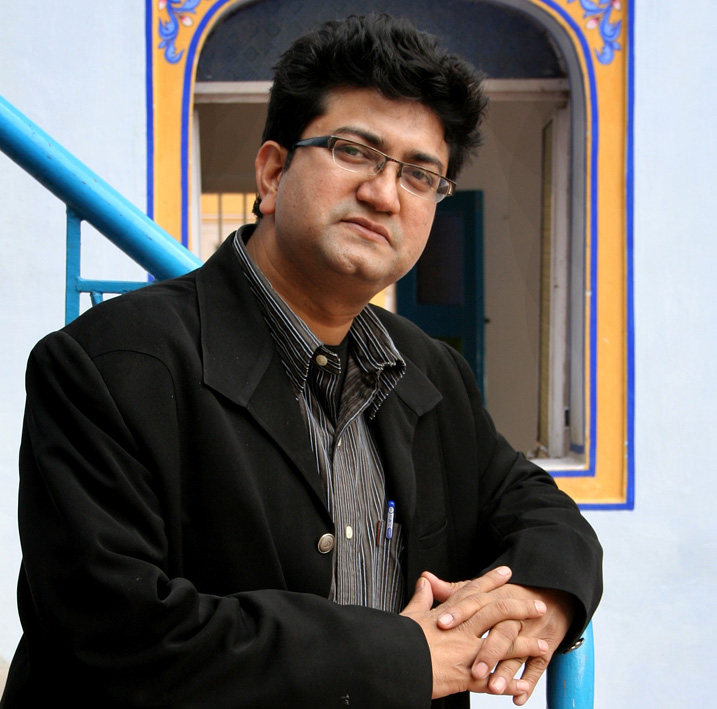 McCann Worldgroup Mumbai has been named the India Creative Agency of the Year for the third time in a row following the release of the 2020 Campaign Brief Asia Creative Rankings.

McCann Mumbai’s tally of 1965 points was enough to hold off a big challenge from FCB India.

In the battle for the top ranking McCann’s amazing haul of awards in 2018 totaled 1900 Creative Ranking points.

FCB India’s great performance over the last 16 months places them in clear #2 position with a total of 1740 points. It also gives the agency a very healthy lead going into next year’s Campaign Brief Asia Creative Rankings.

With only 5 points separating them DDB Mudra Mumbai edges out Dentsu Webchutney Bangalore to finish ranked #5 and #6 respectively.  DDB Mudra and Dentsu Webchutney both had a great success over the past 14 months and, along with Cheil Worldwide Gurgaon and Wunderman Thompson, will give good competition to front runner FCB Ulka for next year’s India’s Agency of the Year title.

Wunderman Thompson India’s improved performance at award shows in 2019 scored them 445 Creative Ranking points raising the agency up from #20 in 2018 into the top ten at #7 this year. 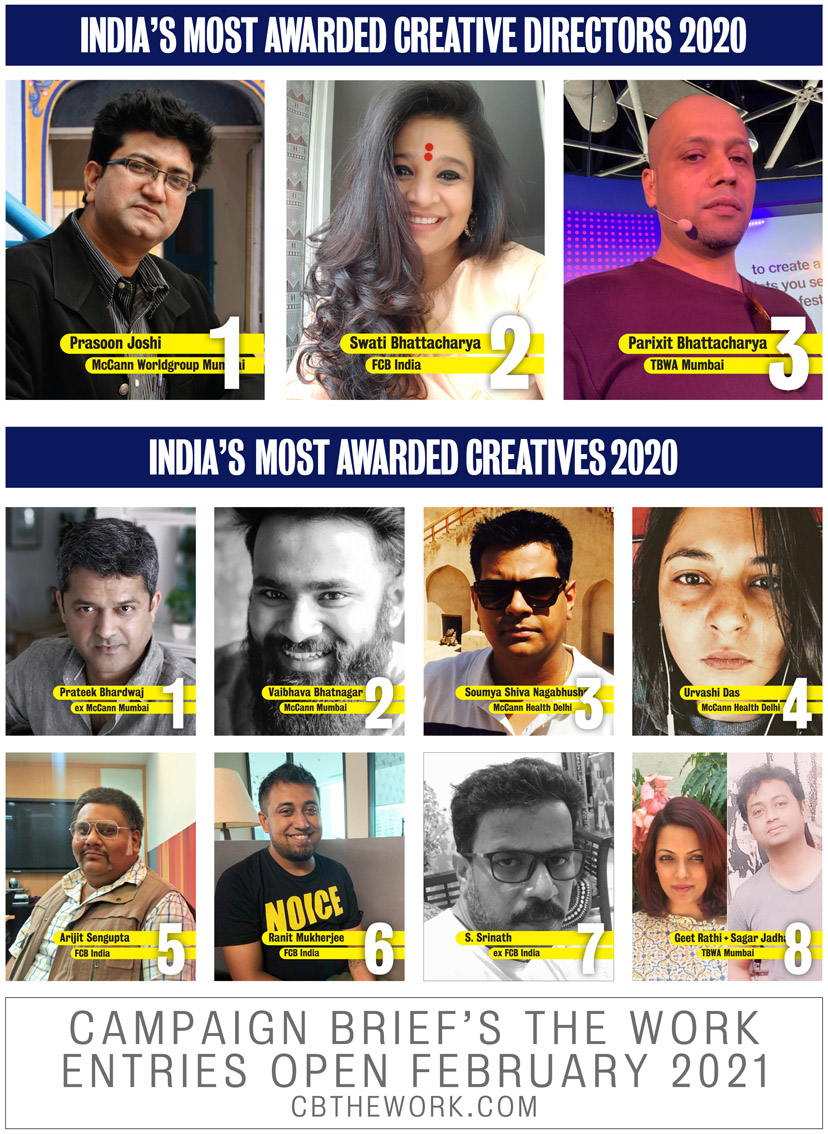 Lowe Lintas CCO Prateek Bhardwaj takes out #1 position in Campaign Brief Asia’s India individual ranking of creatives for the second consecutive time. The ex McCann Worldgroup National Creative Director scored a total 1570 points, all in 2018 and while he was at McCann.

His former work colleague at McCann Vaibhava Bhatnagar moves up one position from 2018 to claim #2 spot with 1140 points.

Soumya Shiva Nagabhushan fell only 15 points short of #2 place to claim #3 and narrowly edged out fellow ex McCann Health New Delhi creative Urvahi Das who is ranked #4. The duo are now at Ogilvy in India.

Two of this year’s big movers in the Creative Rankings are TBWA Mumbai creatives Geet Rathi and Sagar Jadhav who move into equal #8 position (from #81 in 2018).

Taking out the next five places are FCB India’s Shailesh Khandeparkar (#10) with 640 points and Mayuresh Vengurlekar, Mukesh Jadhav, Prashant Pawar and Ravi Ananthan in equal #11 position with 615 points. 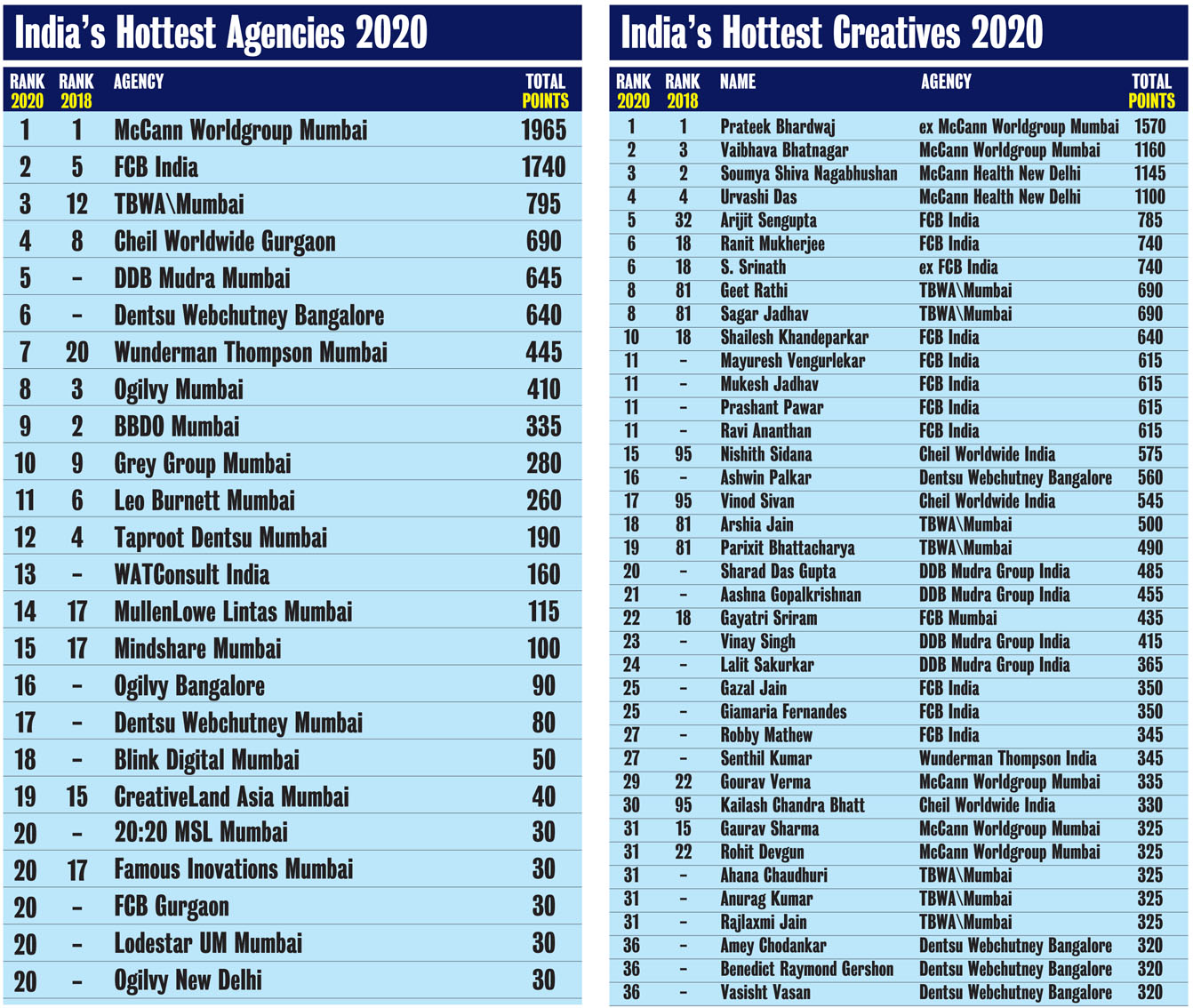