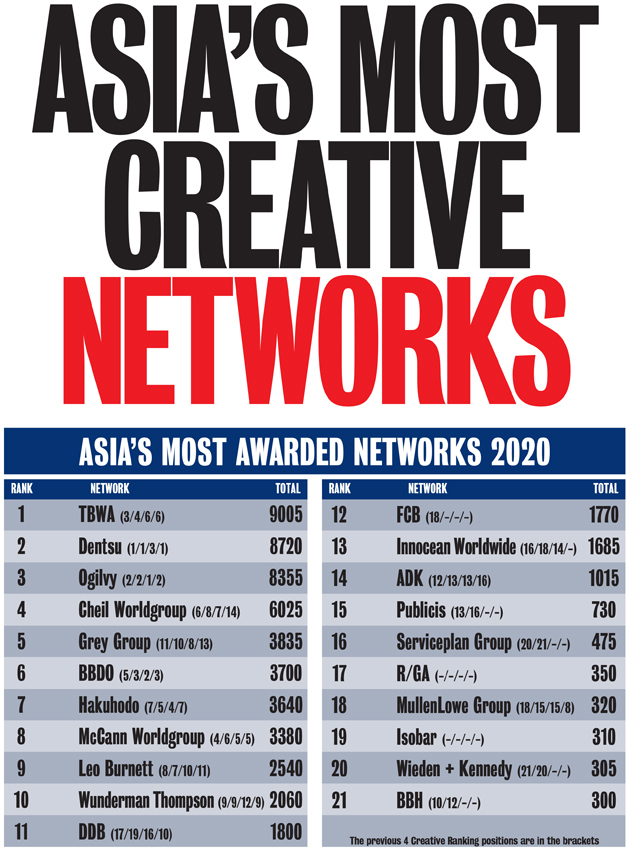 The 2020 Asia Creative Rankings sees a new #1 for Campaign Brief Asia’s prestigious Creative Network of the Year title. TBWA has shot up from #3 ranking in 2018 to knock Dentsu out of the top spot they have held since 2017.

In a major coup, TBWA has taken out the Creative Network of the Year award following the release of the 2020 Campaign Brief Asia Creative Rankings. With 9005 Creative Ranking points from the 27 different regional and international award shows over the past two and a half years TBWA ranks just in front of the Dentsu network at #2.

The Network ranking is an important part of the Campaign Brief Asia Creative Rankings each year. In the late 90s and early 2000s it was always a close battle between the Saatchi & Saatchi and Ogilvy networks – the latter winning Creative Network of the Year seven years in a row.

TBWA’s win is due to an improved creative performance in most markets. The network has four offices in the Top 25 in Asia with three in the Top 12.

The network also saw big increases in The Philippines, Thailand and India. TBWA\Santiago Mangada Puno Philippines moved up from #11 in 2018 to #7 overall in Asia this year with 1780 Creative Ranking points. TBWA\Thailand’s haul of 1450 points saw them rise from #13 to #11 overall. TBWA\Mumbai was the network’s biggest improver moving up from the #90 ranking in 2018 to sit at #25 this year on 795 points. 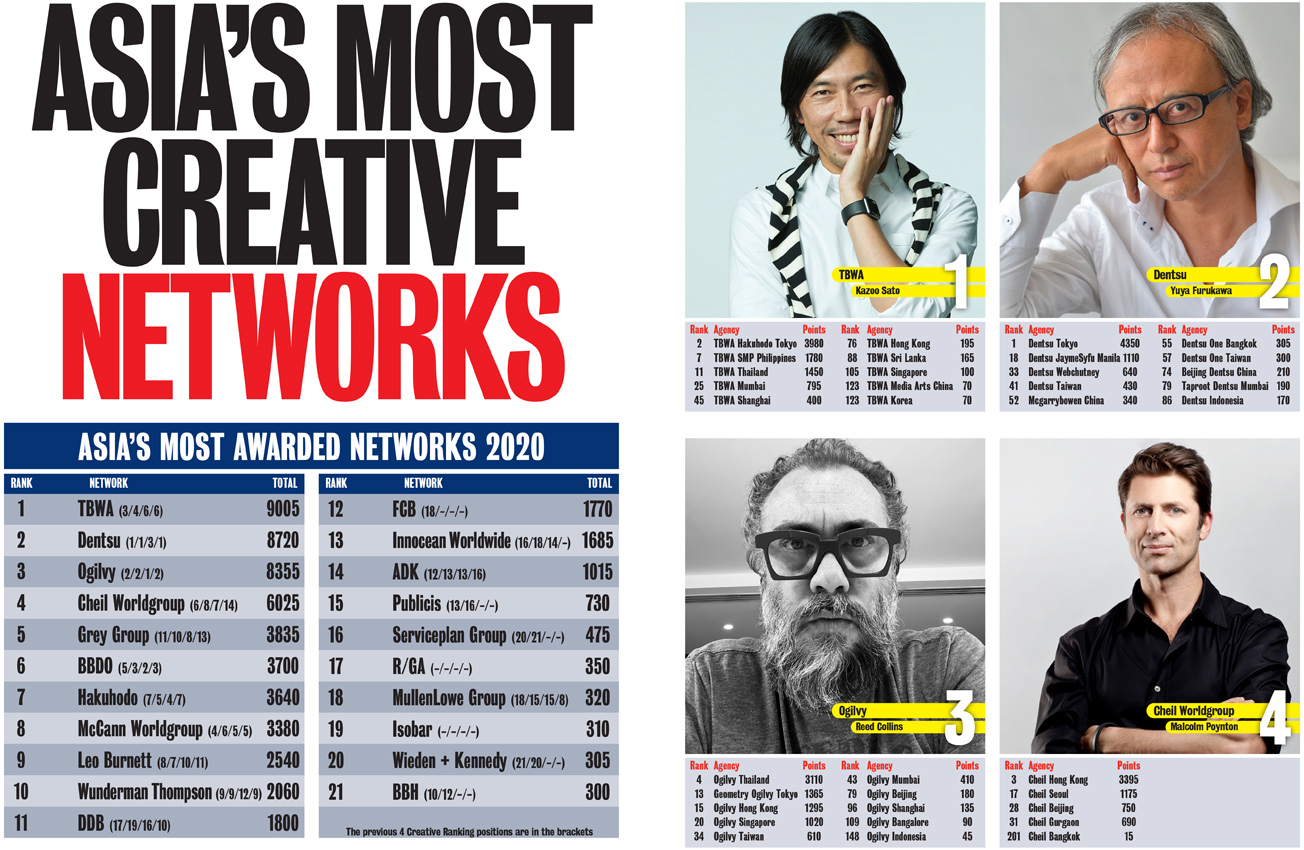 Dentsu Jayme Syfu Manila also continued to rise up the Creative Rankings – up from #24 in 2018 to #18 this year. They contributed 1110 points to Dentsu’s total. At #33 overall this year is Dentsu Webchutney Bangalore with 640 points. It’s a great result for the agency as they were unplaced in the 2018 Creative Rankings. Dentsu Taiwan, mcgarrybowen China, Dentsu One Bangkok and Dentsu One Taiwan also made healthy contributions.

Ogilvy has 4 offices in Asia’s Top 20, with Geometry Ogilvy Japan is their next best performer ranked overall #13 in Asia with 1365 points. Ogilvy Hong Kong is ranked #15 with 1295 points and Singapore is at #20 with 1020 points. Ogilvy Taiwan made a healthy 610 point contribution and ranks #34 in Asia.

The two big improvers in the Creative Rankings are Cheil Worldwide and GREY Group. Cheil moves up to #4 this year from #6 in 2018. And, GREY rises an incredible 6 places to rank $5 overall this year.

See the list of the Top 25 most awarded Agencies in Asia and the 20 highest ranking creative directors. 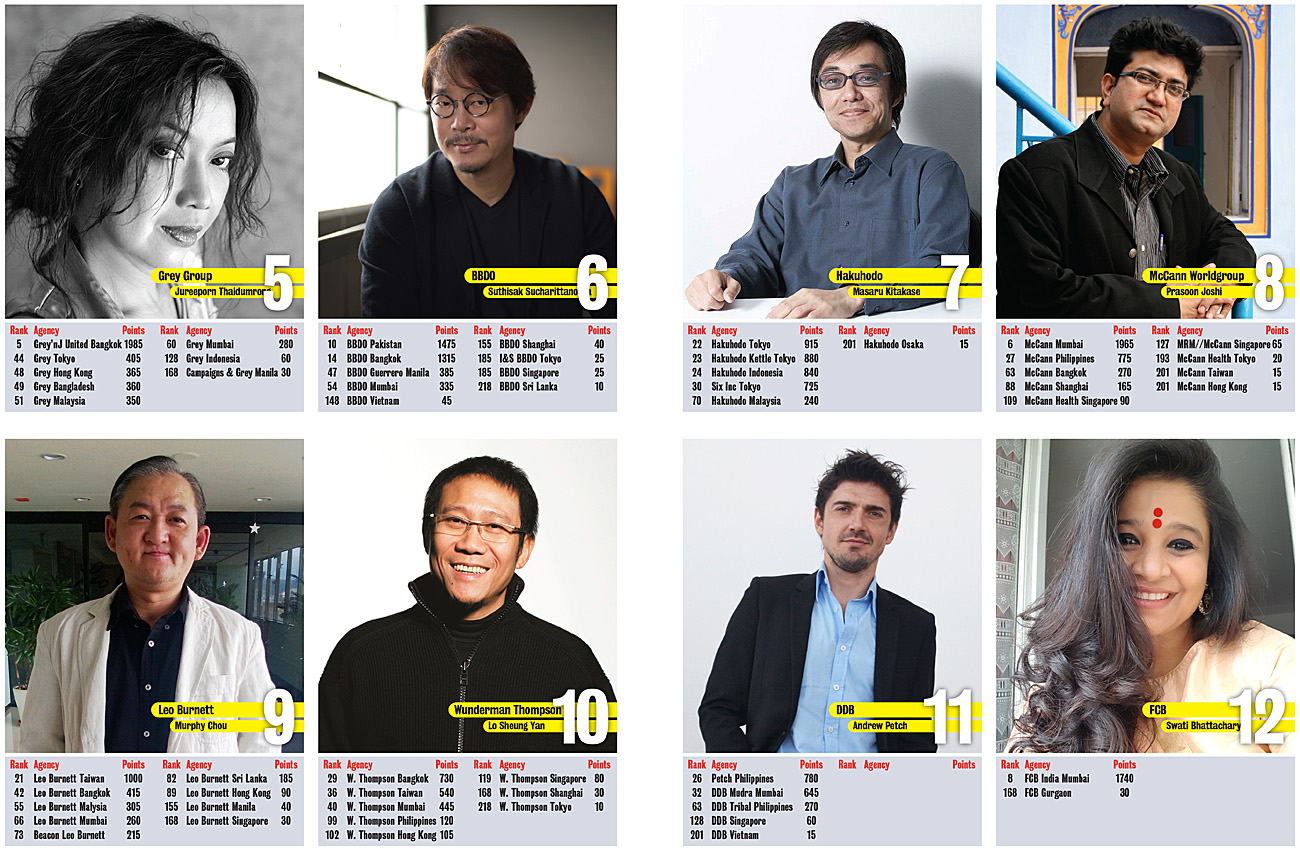 2020, as we all know, is rather “unique”. Due to Covid-19 we have had Cannes Lions, AdFest, Spikes Asia, London International Awards, Clio and AdStars either postponed or cancelled. Only 5 shows were held from January 2020 to July 2020 – D&AD, One Show, AWARD, Campaign Brief’s The Work and New York Festivals. These 5 shows plus all 11 award shows from from both 2018 and 2019 are included in these Creative Rankings. This means the 2020 Creative Rankings represent the results of 27 different award shows. Full breakdowns and methodology is included in the 80 page downloadable magazine released tomorrow.